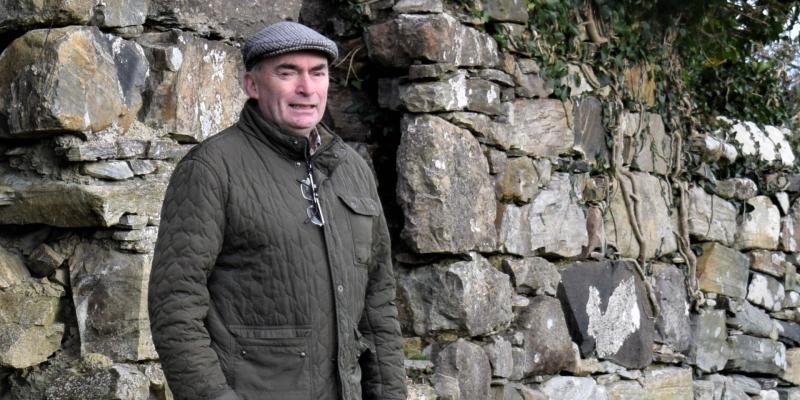 Gerry McLaughlin’s debut poetry collection The Breed of Me is a real gem for those who know and love the people and places that are recalled on its pages.

But the real magic of Gerry’s writing is the connection that readers feel, even if they never knew any of the subjects of the poems.

It is clear to see that this connection is important to Gerry, and is borne from his own deep sense of the people and places that shaped him.

The title The Breed of Me echoes what he himself describes as ‘the family and the familiar,’ and indeed, his journey as a poet is closely connected to his parents and to his heritage.

“It started in 2017 after my mother Rose passed away, and my father Willie passed away nine months later,” he said.

“It was initially to deal with the grief. I was very close to my mother. After three miscarriages and my stillborn sister baby Rose, I was always going to be spoilt.

“Both of my parents had a massive influence on me and I wanted to honour their memory.”

“My people on my mother’s side are the Wards, Mac an Bhaird, the bards, and that is why I believe it is in my DNA to write. It wasn’t a thing that I had to work really hard on, a line or an image would come to me and something would grow from that.”

“William Wordsworth described it best when he said poetry was ‘emotion recollected in tranquillity’ and that is a beautiful definition because the idea or image or emotion hits you sometimes like a thunderbolt. You get an idea and you write about it when you are calmed down a bit.”

Gerry’s collection of poetry takes readers on a journey from the Donegal Gaeltacht across the border into Fermanagh, to Galway City and into the wilds of Connemara, to Belfast during the darkness of the Troubles, and into modern Ireland in all its terrible beauty.

We meet a lot of people along the way - some who are no longer with us but who had a profound impact on their communities, others who still walk among us, making the world a brighter place.

Talking about the people and places that inspired him, Gerry said: “The first would have to be the place I was born, Meenaleck in the Rosses.

“I was only 2 ½ when I left but it is probably subconsciously why I chose Irish in UCG.

“I remember my mother telling me that there were old women in black shawls who called me Síoda Beaga Galanta which means a beautiful little piece of silk. They obviously didn’t know how I was going to turn out!”

The family moved to Cloghore between Ballyshannon and Belleek in the early 1960s.

“I have written about my home place in Mairan Terrace, the people I grew up with in Cloghore,” said Gerry.

“We were lucky enough to have some great sporting heroes in our community.

“Two doors down was Matt Hughes from Tipperary who was a wonderful hurler and he had a voice ‘like rich warm wine,’ a beautiful singer.

“And there was his brother-in-law Willie Rogers who was my GAA hero in the mid 1960s; a giant of a man with a wonderful wit, and sadly both of them have passed on.

“Another close neighbour that I wanted to remember was Rosaleen Maguire, Sylverter’s mother. She was a big influence on myself and other members of my family. She was a unique character, witty and wise and always encouraging.”

The next chapter in Gerry’s life began when he went to UCG in the late 1970s to study two great loves, Irish and History.

“Galway will always have a special place in my heart. I went there when I was just 17 and between the jigs and the reels I didn’t get out of it until I was 24.

“My father Willie said it was the longest holiday I ever had.

“I met two ‘distinguished’ gentlemen there who will be launching the book, Joe Connolly and Sean O’Coisdealbha,” Gerry said with a mischievous twinkle - though he didn’t elaborate!

“And,” he continued, “There were many others who had a huge influence on my development, even though I didn’t realise it at the time.”

Another place that Gerry mentions is Belfast.

“It gave me the start of a great career even though I saw quite a few horrors,” he said.

So where does Gerry feel most at home?

“Probably the place that I love most of all is Corlea, between Belleek and Cashelard,” he said.

“My father came there in 1925 and I was reared on stories about Corlea, about its drama society and its great cross-border Gaelic football team. And especially about the way that Corlea got shafted by some of the then GAA authorities.

“It will always be a very special place for our family.”

“My mother’s home in the hills of west Fermanagh was another huge influence - Tullygrevagh, which means the rough, hilly ground.

“My ancestors the McGuires, my mother’s people, were banished from the good flat land in Boho towards the end of the 18th century for something the strangers called sedition.

“I learned all that history from my mother, my uncle John McGuire and my step grandmother Mary Ellen MdGuire.

“That rugged mountain landscape has been very inspirational and would have formed part of my character. And once again, it's the history and the experiences of my people. All of those places I have a personal connection with as well.”

While celebrating the people and places that were important to him, Gerry has really struck a chord with a lot of people.

Reflecting on this wonderful connection that people feel to his subject matter, Gerry said: “The poems could apply to anywhere in rural Ireland because they celebrate the local, and the local does not get celebrated too often.”

Of course, the GAA and Gerry’s love of sport and particularly hurling, also feature.

“The GAA has had a huge influence on our family,” he said.

“My brother Liam and I had the honour of captaining Fermanagh senior footballers and senior hurlers respectively. Under GAA rules, we were totally illegal because we were from Donegal.

“But the sons of Willie and Rose McLaughlin never had any frontiers.”

And indeed, that captures the thread of an unquellable rebellious spirit that also weaves its way through this collection.

The Breed of Me will be launched in Rockfield Community Centre (between Belleek and Ballyshannon) on Friday, April 29 at 7.30pm. Special guests include esteemed Irish language poet Sean O’Coisdealbha and Galway hurling legend Joe Connolly.

A great evening’s entertainment is guaranteed and everyone is welcome.