Column: Celebrating what we have overcome and how much we have achieved 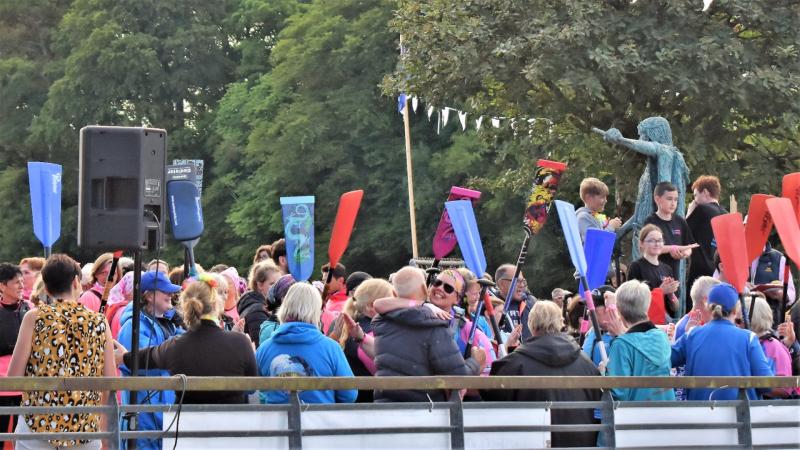 There were times during the Covid-19 restrictions that it felt like we would never be able to enjoy freedom of movement and large gatherings and events ever again.

Family and friends who were abroad seemed impossibly far away. All we could do was hope, wait, and try to play our own part in stopping the spread of the virus.

Looking back now, only six months after the restrictions were lifted, it all seems a bit unreal, like a bad dream.

And yet, the air of nervousness has not completely cleared; the warnings of a potential new wave are ever present.

And if there is one thing that has really changed for many of us, it is that we no longer take for granted the opportunity to meet family and friends, to embrace and celebrate life, to cherish precious moments together.

In that context, last Saturday was a really special day for myself and members of my family, friends,  my Donegal Dragons clubmates, and dragon boaters from all over the world.

And I’m told that the lovely feeling of positivity extended far beyond the pier and was felt throughout Donegal Town.

For the first time since 2019, Donegal Town hosted a dragon boat regatta and it was a sight to behold.

People had been arriving in town throughout the previous week, from Italy, the UK, Belgium, Canada, Australia and around Ireland.

Many paddlers travelled with family and made this event their holiday, meaning there were hundreds of visitors staying locally as a result.

As people came together on the pier on Saturday afternoon, there were hugs, happy tears, smiles and laughter all around. This sport has a really strong camaraderie, and many of its participants have the added bond of being breast cancer survivors.

For some people, this was their first regatta, their first time experiencing their wonderful sport in a wider context.

For others, it was a return to something we had all missed greatly - the excitement of race days and the chance to catch up with our paddling friends from near and far, to sow the seeds of new friendships and to push ourselves beyond what we previously thought were our limits as we took to the water to race.

Dragon boating was something I fell into almost by accident and it has been a huge part of my life ever since.

About six months after the death of my husband, I was covering a story about the relatively new club, Donegal Dragons. They were holding a fundraiser and awareness event and so I went along to give it some coverage.

I love boats and all things water related, so I happily accepted an invitation to give it a go, thinking I’d go out once and that would be it. The reason I didn’t see it going any further was because I was assuming this was a competitive watersport for people who were ‘sporty’ as opposed to a middle-aged, asthmatic woman battling to get her weight under control thanks to what at the time was an undiagnosed autoimmune condition that was attacking my thyroid.

I soon realised that this sport, and these magnificent boats, were very special. There is a place for everyone. Physical strength has its place just as much as cardio fitness. Different seats on the boat require different physicality, and so I soon found my place on the crew.

And I found a lot more than that. Being out on the water, focusing on each paddle stroke, on the rhythm of the boat, on keeping time with fellow paddlers so that we all move forward as one, none of that leaves time for anything else in your head.

It is a mental, physical and emotional tonic that gets better and better as each session builds on the benefits of the last one.

And then there is the competitive side. Never could I have imagined that I would, in my forties, in the midst of grief and learning to cope with the demands of being a single parent with a full-time job, discover a sport for which I would have so much hunger, passion and commitment to always want to strive to do better, to dig deeper, to give more.

As I already mentioned, I would never have been  considered sporty. But I have found a sport that I love and that along with an incredible team, have enjoyed a reasonable degree of success.

I can’t imagine how different the last seven years would have been without dragon boating, without the friendships and tribal belonging, the   health benefits and the sense of accomplishment that it has given me.

Last Saturday was definitely a high point at every level - welcoming so many people to our lovely bay, a day of hard fought races, finishing second in our final, seeing our youth team show how far they have come since being formed only last year, starting and  finishing the day with food and music.

Let’s hope there will be many more wonderful days to come.