Glenties revolution to continue, but Kilcoo will be keen to spoil the party 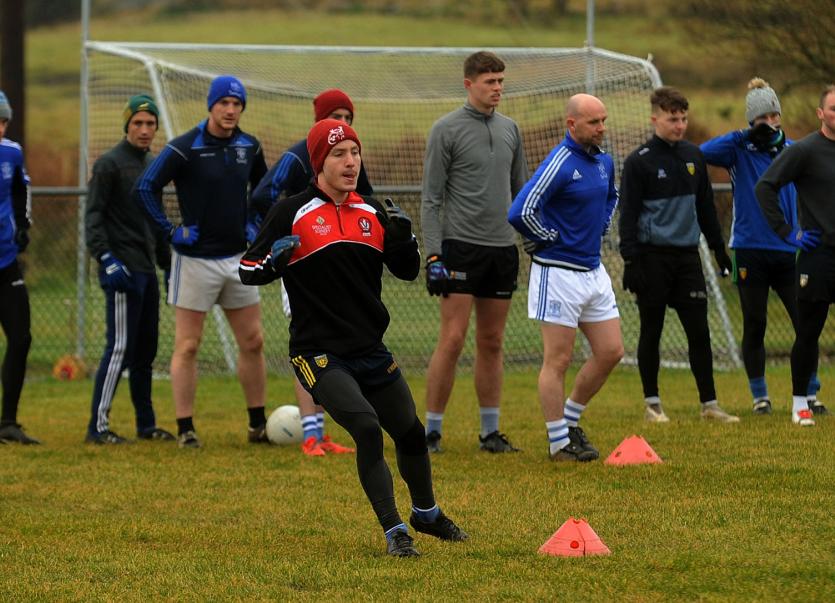 Eunan Doherty during a training session for Naomh Conaill ahead of the Ulster Final.

Sunday’s Ulster Club Final sees Glenties installed as favourites to bring the Ulster title back to Donegal and in doing so emulate the feat of Gaoth Dobhair who were only the second Donegal team in the history of Ulster club football to win this coveted trophy.

Glenties are favourites this weekend and their play in the campaign to date has shown them to be a team of much substance, but I would caution about when the anticipation of winning becomes a real possibility, this can become a dangerous place mentally.

One of the biggest enemies of achievement is the expectation of what the actual attainment of success can bring.
In striving to win the title of best club side in Ulster, expecting to win is a dangerous route towards complacency and could increase the probability that a team could or would lose critical focus.

Glenties have played with incredible passion in Donegal and in their journey through Ulster to this final. On Sunday they are representing not only their town and their people but the whole county and I hope that a very large Donegal following will be in Omagh to see this team bring the Ulster title back to the tidy town for the very first time in their proud history. Representing their club and wearing the blue jersey with pride has definitely ignited this Glenties teams spirit.

Glenties have played with incredible momentum this year, but momentum simply does not just happen, various factors combine to create winning momentum.

Clawing their way back into the county final when Gweedore seemed to be past the post was a significant factor in this momentum while Martin Regan and his management team showed a tactical astuteness that was also vital in creating a self-belief without which Glenties would not be preparing for this Ulster final.

Challenge
In the challenge that Glenties face no doubt much time has being spent in detailed analysis of Kilcoo,a team that have dominated Down football in recent years.

Derrygonnelly, the Fermanagh champions, put Kilcoo to the pin of their collar in their Ulster semi-final and indeed with a clinical place-kicker it could well have been a Donegal- Fermanagh Ulster final.

Quite frankly, Kilcoo did not impress in that last outing, but we all remember Donegal’s display against Mayo in the All Ireland semi final of 1992; it was far from impressive but was the ideal way to qualify for an All-Ireland final.

I will always believe that Dublin approached that final in an over confident frame of mind, part of their build up saw some of their players modelling at a fashion show in Arnott’s the week before the game while Donegal were busting a gut in Mac Cumhaill Park preparing for the final...By the time that Dublin realised that Donegal had a very talented squad of players it was too late for Dublin to do anything about it.

So, Kilcoo will not be the least bit overawed by the challenge facing them. Indeed, no Down team ever suffered from an inferiority complex no matter the opposition, and I remember when playing against Down you always faced a team with a swagger which could almost intimidate if you let it.

Pace
Kilcoo did impress with their speed and ability on the counter attack in the semi-final, and there is quite a bit of pace in their team, but defensively they were less than solid against Derrygonnelly, who created three gilt edged goal scoring opportunities, but a lack of experience cost them dearly in this regard. To win their first Ulster title, there are a number of crucial things that

Glenties need to get right. Management must try to keep the players relaxed, but at the same time make sure that they are concentrating, and don’t make silly mistakes, this is particularly important in Ulster where the opposition will have at least two or three players who can hurt you.

Midfield is crucial, games can be won or lost in the middle of the park, and a team must also be clinical in the box, as goal opportunities are at a premium in this level of football and they must be converted. It is also very important to “know” the referee, to know about their personality and the things they like to penalise, while it goes without saying that extreme discipline is of paramount importance in the modern game.

Management always have a crucial role to play ,but especially in a final. When all the key players are going well managing is easier, but if one or two of the big guns are off colour for whatever reason, maybe they have not slept well or are off colour for personal reasons, those players can have a very negative effect on team performance so it is vital that management bite the bullet and make tough calls even if they are unpalatable.

A Glenties win will cap a great year for Donegal on both the inter county and club stage and having admired their determination, grit and pride in the jersey coupled with much ability I am confident that Glenties will be the place to be on Sunday night.

Pauric McShea's column appears weekly in the Donegal Post - out every Wednesday.