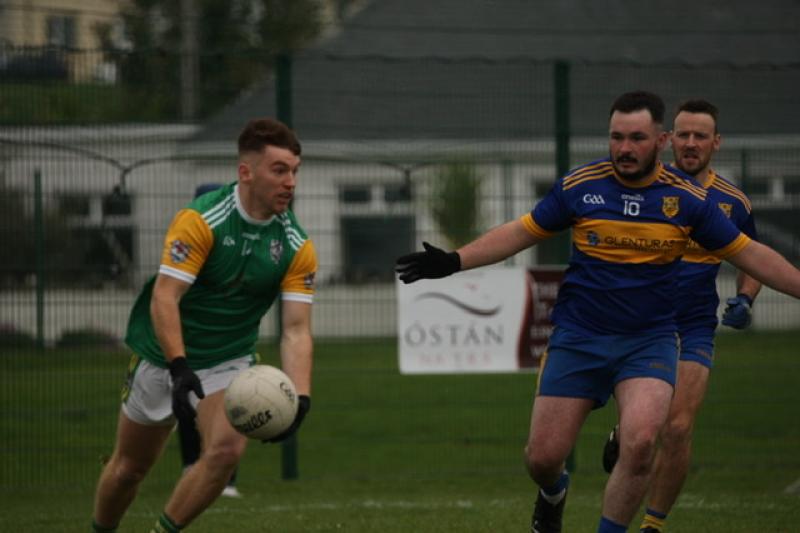 Downings booked their place in the last four of the Donegal Junior A Football Championship with a few anxious moments against Naomh Padraig.

With the wind playing a huge factor, the home team were 0-10 to 0-2 up early in the second half, only for Johnny Toye to take the team from Muff back to within four at a stage. Toye would score all but a point of his team’s total.

However, in the final quarter, Downings steadied themselves and Lorcan Connor, who scored five on the day, managed to keep Naomh Padraig at arm’s length.

With the wind at their backs and plenty of experience playing with and against it as the weighty Atlantic breeze rolls in, the home side made good use of the elements in the first 15 minutes.

An opening quarter lead of 0-5 to 0-0 came courtesy of a pair of points apiece from Connor and then Kealan McGroddy, before Johnny McGroddy chipped in with the fifth.

At the first water-break, the message from the Naomh Padraig bench might well have been to dig in and run the ball at every opportunity. Their forages upfield were tough, whilst Downings, as well as kicking five points, also posted four wides and saw an effort drop short into Oran McCauley’s hands.

Jamie Lee McBride’s point continued the trajectory of the contest, with Jonathan Toye opening the visitors’ account on 23 minutes, prior to Caolan McColgan adding a second just moments later. That made the score 0-6 to 0-2.

Conor Boyce’s long-ranger, coupled with another from the beach side, and Connor’s third of the day meant Downings were 0-9 to 0-2 in front at half-time. For Naomh Padraig, only falling one more behind than the six they were at the water-break gave reason for certain optimism. That said, they had a lot of work to get through.

Although the Inishowen side were willing to push up following the change of ends, the first score in part two was a Downings one, with McGroddy effortlessly posting. However, three frees and a 45 from Toye  took Naomh Padraig back to 0-10 to 0-6. For the first time in the contest they were penning Downings back.

Caolan McColgan then nabbed a John McGroddy kick-out only for the Downings goalkeeper to scramble back into position to redeem himself. Connor’s free at the other end was a nerve-settler for Downings, who were 0-11 to 0-6 in front by the time of the second half water-break.

Downings, though, took the sting out of it through two scores from Connor and Danny McBride burst through to make it a seven-point game with just four minutes left, 0-13 to 0-6. Toye, who certainly had his shooting boots on, scored the point of the day from distance and then a free, although at that stage you got the feeling Naomh Padraig needed a green flag more than a white.

On go Downings, although Naomh Padraig’s season still has one vital installment - they are due to face Na Rossa in the All-County Football League Division 4 promotion play-off final.