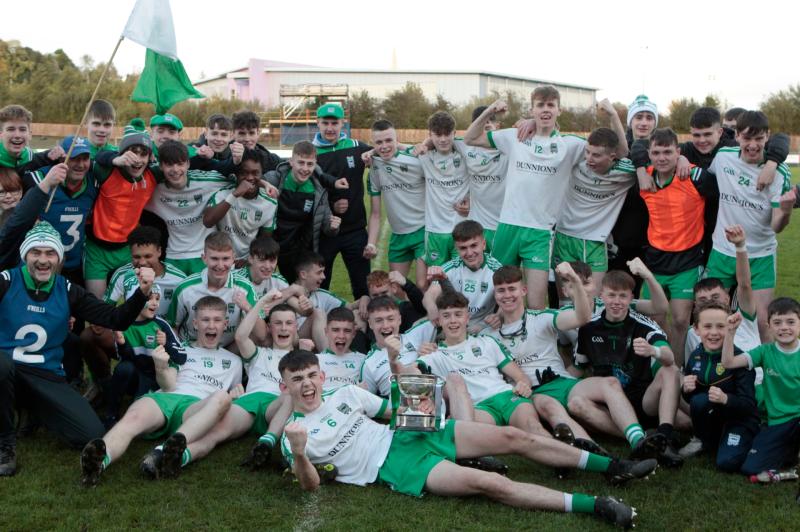 The famine is over in the Twin Towns, Sean MacCumhaill’s are Donegal minor champions once again after their final win over Glenswilly at O’Donnell Park.

It is 50 years since MacCumhaill’s last won the minor championship, the blue riband competition of underage football in Donegal.

And they did it against a young Glenswilly side that came into the final - their first at this level - and were much the underdogs against MacCumhaill’s who are unbeaten in league and championship in 2021.

Kevin McCormack and Andrew Murray hit the goals and McCormack also landed five points in a dazzling display on the edge of the Glenswilly large rectangle.

But this was far from a one-man show as MacCumhaills had big performances all over the park.

The eventual champions broke from the blocks if they meant business when Cormack split the posts on 26 seconds for the game’s opening score.

And three minutes later McCormack struck for the opening goal after good work out the field by midfielder Fionn McNulty.

Daithi Gildea at full-forward was a constant threat up front for Glenswilly early on.
MacCumhaill’s scored again when Marcus Mbul waltzed through to split the posts.
A packed and well organised Glenswilly defence had Mandy Kelly and Mark Bonner on top of their game.

McCormack hit the target once again to race into a 1-3 to 0-0 lead before Kelly kicked Glenswilly’s first point, two minutes from half-time.

In a carbon copy of the first half, MacCumhaill’s started the second on the front foot. And they hit 1-2 in the opening four minutes to race into a 2-5 to 0-1 lead with Murray grabbing the second goal

Driven on by Kelly and Donal Gallagher in the half-back line and Michael Doherty and Gary Kelly in the middle of the field, Martin Glackin’s team enjoyed a good spell.

Gary Kelly converted two frees to bring the Glenswilly tally to three points by the 44th minute. But the game fizzled out after the second water-break and McCormack, Murray and Conor McGinty kicked points as MacCumhaill’s finished strong.