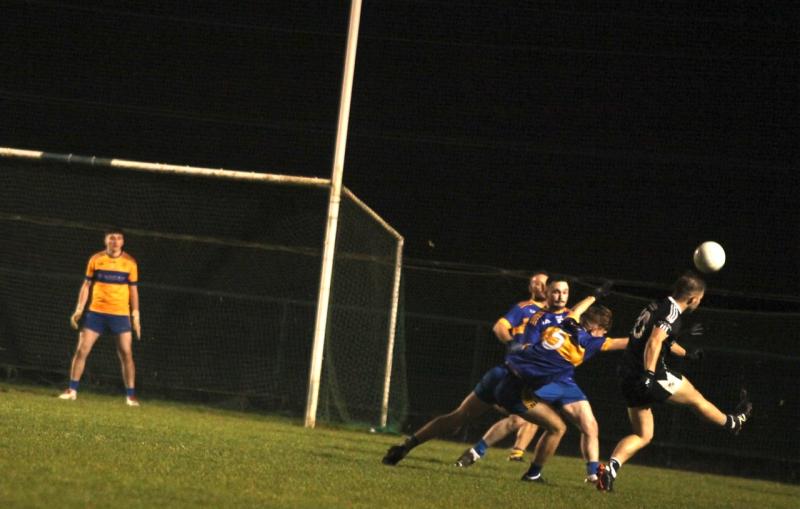 JP McCready scored the most dramatic of winners for Na Rossa as they pipped a heartbroken Naomh Padraig to a place in Division 3 next season with the last kick of the promotion play-off some seven minutes into injury time in Convoy.

Na Rossa scored the opening goal of the game in the first minute of the second half, with Donal Trimble shooting home from a pass of Aidan McHugh.

That played a huge part in proceedings as Cormac McHugh’s team were soon 1-3 to 0-3 in front, only for Naomh Padraig to score 1-3 from there until the hour-mark, with Shane McColgan grabbing the goal and Caolan McColgan impressive throughout.

But Na Rossa, three down, 1-6 to 1-3, and four minutes into injury time, weren't done. McCready, last chance saloon, lobbed a free into the Naomh Padraig square and in a clutter of bodies, Johnny Bonner stabbed home to level it. Extra-time seemed to be the minimum it would take to separate them only for McCready to keep his nerve and win it in dramatic fashion.

With Carndonagh having topped Division 4, second and third played off with the chance of joining them and Na Rossa will look forward to the new year as Naomh Padraig wonder what might have been.

Naomh Padraig started the better, almost grabbing a goal in just 35 seconds with Joe McCauley driving one just across and wide of the Na Rossa goal. They continued on the front foot to post the first two scores - an impressive point on the run from Caolan McColgan and then a sweetly-struck Aidan Lynch effort on 13 minutes.

Na Rossa grappled their way back on terms with a fine free from McCready then Odhran Molloy’s point only to fall behind again at 0-3 to 0-2 with Johnny Toye pointed. The side from Dooey were creating plenty - they also struck seven first half wides - and trailed at half-time.

Daniel McCauley’s team also missed a couple of chances late in the half, with their total of first period missed chances coming to three wides and two balls dropped short into Oran McCauley. It was a one-point game at the break.

Na Rossa proved their levels of economy after the break though, with a goal inside of 14 seconds of the restart and then added a point through McMonagle to turn it around quickly, with the side from west Donegal 1-3 to 0-3 up on 32 minutes.

McColgan, at the other end, scored a magnificent point moments later as McMonagle, already booked, came within a whisker of picking up another. Instead he was given one of those Shane Toolan pep-talks that basically mean if you so much as hiccup, you’re gone.

McColgan scored another brilliant point on 41 minutes to bring the Inishowen team back to within one, 1-3 to 0-5, and although trailing had plenty of momentum as the water bottles were thrown out. Toye, with his second point of the evening, levelled it up at 0-6 to 1-3, some 49 minutes in.

Then, with six minutes to play, Shane McColgan got in on the end of a move and didn’t trash at the chance, insteading finishing with immaculate composure into the bottom corner for a goal and three-point lead, to the delight of the considerable Naomh Padriag support.

Na Rossa were reduced to 14 in injury time when McMonagle finally ran out of rope and was shown a second yellow - one of three late cautions his side received. It looked like curtains then, when in fact it was far from it.