LyIT head for Sigerson sprint and a familiar foe

LyIT begin their Sigerson Cup campaign against IT Carlow 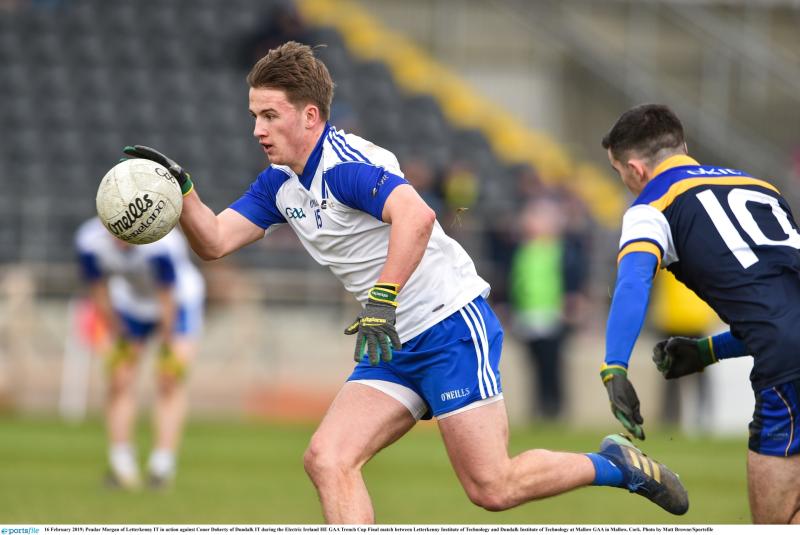 Peadar Mogan, playing for LyIT in 2019, remains a key player for the Letterkenny side.

In these days of marathon competitions and long seasons, the Sigerson Cup offers something of a strange respite, even with its the feeling of it being a sprint.

The third level competition begins this week and will have concluded by mid-February.

Letterkenny Institute of Technology have been back in the Sigerson Cup since winning the Trench Cup in 2019.

A semi-final visit, an a heartbreaking 2-9 to 1-9 defeat by IT Carlow, represented a useful outing back on the top run for LyIT in 2020. The competition, like many others, fell due to Covid-19 in 2021, but LyIT and IT Carlow, with new sets of participants, cross swords on Tuesday evening (Meath Centre of Excellence, Dunganny, 7pm).

LyIT are under the management of Maxi Curran for this term, the Downings clubman succeeding Michael Murphy, who has taken up a new role as Head of Sport at the Port Road campus.

“It’s new to me, the third level scene. It’ll be over real quick, in the middle of February, so it’s a sprint.

“It’s a lovely brand of football. They would all rave about the colleges football. I

“t’s a short run in and a different operation to club or county in that it’s relatively tactics free. Teams aren’t coached to death and the shackles are off a bit. You’re more reliant on the innate ability of guys more than game plans, structures and systems.

“This is maybe a small step down for the players used to the inter-county and senior club scene - and the boys really enjoy that. We have a large chunk of Donegal under-20s and some Donegal seniors. There is a freshness and excitement and they’re very keen to get going.”

St Eunan’s and Donegal defender Caolan Ward will line out against his alma mater on Tuesday, the Letterkenny man having previously turned out for IT Carlow in the Sigerson Cup.

Ryan McFadden and Rory O’Donnell, who made their Donegal debuts in Friday’s Dr McKenna Cup win over Down are included while Jack McSharry, Keelan Dunleavy and Jack Gallagher have worn Donegal jerseys up to under-20 level.

Eoin Dowling and Kieran Tobin had memorable years with St Eunan’s and should be central to proceedings. Liam Gaughan, who turned out for Sligo in the Connacht SFC last summer, is also in the LyIT ranks.

Curran says: “It speaks volumes for where LyIT have put themselves. We’re now in a place where the top footballers in Donegal are considering Letterkenny as a viable option.

“They’re staying around and that’s great for Donegal football. It’s a win-win for everyone. The level of courses available is making it a very exciting prospect. This could be the start of something really exciting.

“The squad is 95 per cent Donegal based so we’re fortunate that they know each other pretty well.”