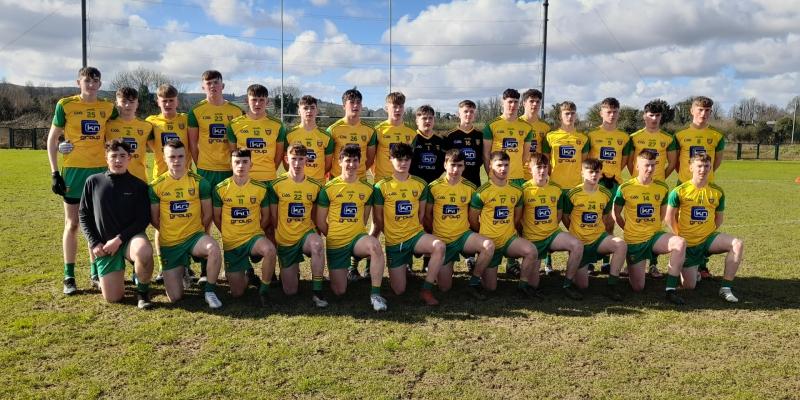 A superbly crafted and finished goal in the 56th minute gave a physically more powerful Cavan team a narrow victory over Donegal in Breffni Park in the U-17 Development League.

Cavan’s tiny but talented sub Luke Allison dipped the shoulders to scythe through the left wing of the Donegal defence. He spotted Michael Smith inside, and hit a great kick pass that bounced delightfully into the midfielder’s hands.

Smith was at an acute angle, and it looked like an impossible shot. But he unleashed a rocket that flew across the face of Zach Conlon’s goal. The ball hit the sweet spot where the upright and the crossbar meet and hurtled into the net.

Given the closeness between these two very well drilled sides, a goal was always going to be a huge score as Smith’s sizzler put Cavan into a 1-9 to 0-8 lead. Donegal did have a chance to reply in kind a few minutes later but sub Sean McLaughlin’s palmed effort in front of a gaping goal drifted just wide.

Full-forward Daithi Gildea had the last score for Donegal from a free but that was literally the last kick of the game and Cavan had just edged home.

A pretty strong looking Cavan got off to a brisk start and opened their account when full-forward Lorcan Reilly pointed from a free. It was all Cavan in this period as they repeatedly attacked down the right flank of the Donegal defence.

And towering midfielder Evan Crowe hoisted over a great point to underline their early supremacy. It took Donegal a full ten minutes to really settle as the impressive Karl Joseph clipped over a fine point.

But Cavan could have put real daylight between the sides after an incisive move ended with Micheal Smith squaring the ball on the sod for Niall Crowe-but the corner-forward’s stabbed effort was brilliantly smothered by Donegal keeper Conlon.

Donegal then had a good patch with points from Donal Gallagher and Lorcan McGee to edge in front by 0-3 to 0-2 before Smith levelled matters with a well struck 45 in the 17th minute. There was nothing to separate the sides from there until the interval Molloy and Gildea swapped points with Smith and James Tully with Gildea edging Donegal clear on a score of 0-5 to 0-4 at the break.

It looked good for Donegal, playing with a slight breeze in the resumption, but it was the young Breffni Blues who made a real statement with Niall Magee landing a fine point.

Gildea and Cavan marksman traded scores in a very close second half where Cavan gave away quite an amount of frees well out from their own goals. But Donegal created a number of good chances, but the final execution let them down.

Cavan made a few changes as did Donegal, but the Cavan subs had more of an effect and none more than Allison who set up that splendid goal which was worth the trip to Breffni Park alone.