A goal from Luke McGlynn and seven Johnny McGroddy points set Donegal on their way to victory over Armagh in the Ulster U-20 Championship quarter-final at MacCumhaill Park.

Over the course of the hour, Donegal were reasonably comfortable, although having led by nine points at the break, 1-7 to 0-1, were taken back to five at one stage afterwards following a bit of a lacklustre start to the second half, with Armagh having little to lose at that stage. Donegal had put in the most solid of foundations.

That said, a seven-point winning margin over Armagh in Ulster isn’t one to turn your nose up at and Donegal were competent and have now a semi-final against the winners Down and Tyrone.

In slippery conditions in Ballybofey following plenty of rain all day, both teams, literally, took a little while to find their feet.

Possession-based, the one passage of play from either team that came to fruition early on came in the eighth minute when McGlynn drove low across Shea Magill after a fine fetch by Bobby McGettigan when Paul O’Hare had bombed in the diagonal ball.

As the rain came down, Donegal found a bit of their jib to move into the 1-5 to 0-0 lead, with Johnny McGroddy hitting four of those - two frees - and Kealan Dunleavy also on the mark. 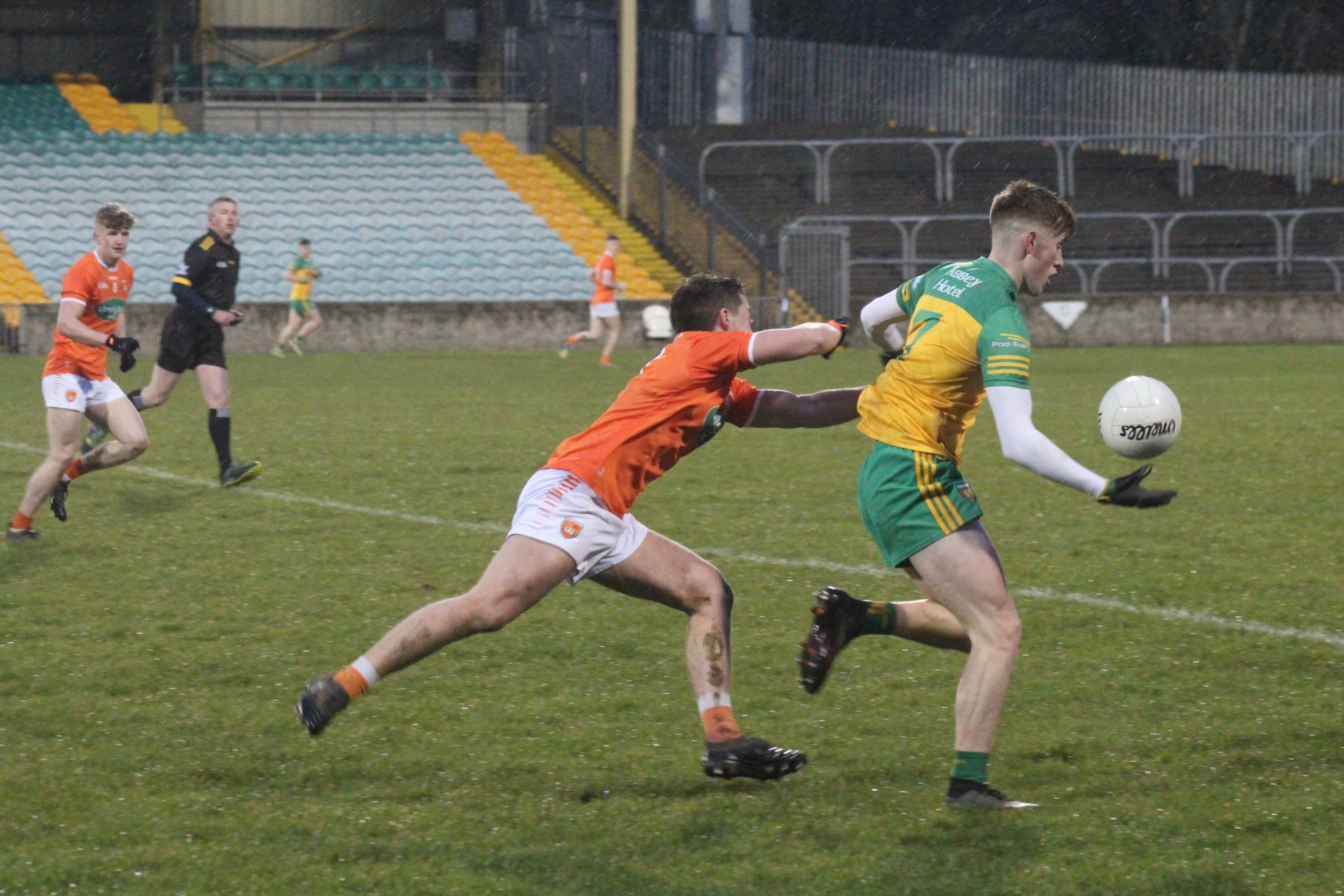 Armagh were getting dominated and took until the 27th minute to register, which they managed through Ronan Fitzpatrick’s free. Donegal, though, scored the last two points of the half, with Eoin Dowling fetching an excellent long Daithi Roberts kick-out to get away and pop over, before McGroddy’s third free. Donegal went in 1-7 to 0-1 ahead at half-time and with nine toes in the semi-final.

Gary Duffy’s team had shown plenty of early season promise to win the Leo Murphy, with four wins from four - Derry, Roscommon and Mayo in the group stage and then Tyrone 2-12 to 1-6 in the final.

Donegal will not be appealing bans to McFadden Ferry and McGee

Armagh, managed by Oisin McConville and former Glenswilly manager Barry O’Hagan, might’ve been nine down but came out in the second half and were by far the better side in the third quarter. Donegal were ineffective for a large chunk of that period of the contest.

Although it took the visitors some 43 minutes to score from play, which they managed from Caolan Finnegan. But they were chipping away and with Fitzpatrick scoring frees, goalkeeper Magill on the money from a 45 and Darragh McMullen, got back to 1-9 to 0-7 down by the 45th minute.

Donegal’s only point scorer in that spell was McGroddy, although McGlynn, with a fine score on 46 minutes. The Glenfin player - last year’s minor captain - got on the end of a raking ball from O’Hare on 52 minutes which deceived the Armagh defence. McGlynn, faced with just the goalkeeper, took a solo and from close range, missed the target. 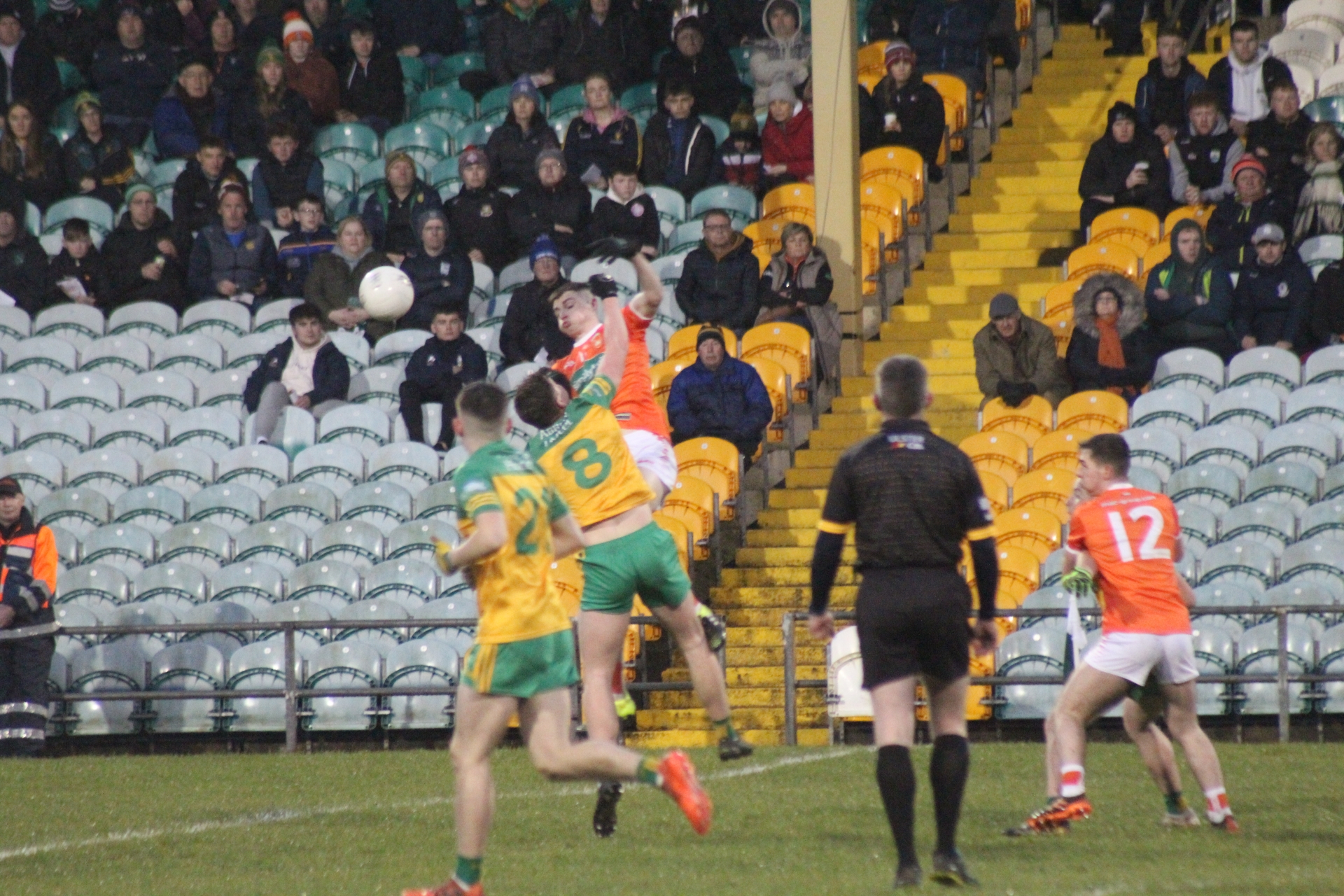 Although not hitting the higher notes up top, Donegal at least had put an end to their series of concessions and Eric Carr boomed over a point for a 1-11 to 0-7 lead with seven to play.

Richard O’Rourke, on as a substitute and making his first appearance of 2022, and McGroddy’s seventh point saw it out. Armagh, though, did strike a very good point from Anton McParland, with a Luke McKeever free the last score of the night.