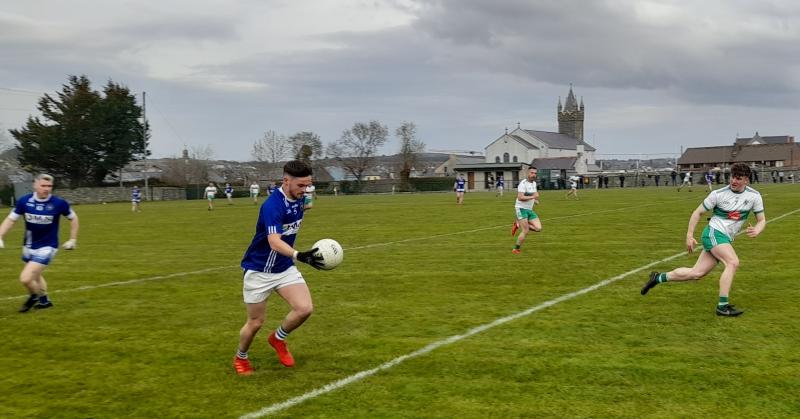 Aodh Ruadh made it two from two with a comprehensive win over Cloughaneely in Munday's Field on Sunday evening.

If you had left Munday's Field after 15 minutes, the final result would have surprised you as Cloughaneely opened really well and were 0-3 to 0-1 ahead after 18 minutes. Paul Sweeney, Sean Curran and Lee O'Brien had hit three great points while Aodh Ruadh's only reply was a free from Diarmaid McInerney.
However, the visitors would not score again until the 48th minute and by that stage Aodh Ruadh had 1-9 on the board.
They took command in the second quarter with seven unanswered points with Nathan Boyle and Eddie Lynch sharing four of them in a blistering three minute period.


Shane McGrath, Matt Gillespie (with a mark) and another McInerney free had Aodh Ruadh ahead by 0-8 to 0-3 at the break. They had also hit eight first half wides as well as losing centre-back Johnny Gallagher after 10 minutes.
Six minutes into the second half they were in complete control when Nathan Boyle went for one of his Aussie Rules high catches. The ball broke to Eamonn McGrath who played Matt Gillespie in to goal.
From there to the finish it was an easy passage for the home side. McInerney hit two second half frees and Peter Boyle also came forward to get on the scoreboard near the end. The McGrath brothers got the other two points in the 50th and 51st minute.
Shaun McGuire and Sean Curran (2) hit frees for Cloughaneely in the second half.
Aodh Ruadh hit seven more wides in the second half and that is something John McNulty and his backroom team will want to eradicate, while Cloughaneely now face Bundoran needing to get points on the board soon.