The first cut was the deepest: 20 years of Donegal-Armagh

Donegal and Armagh have had plenty of recent history with 11 Championship meetings in the last 20 years. Chris McNulty charts the rivalry with Michael Hegarty and Paddy McGrath 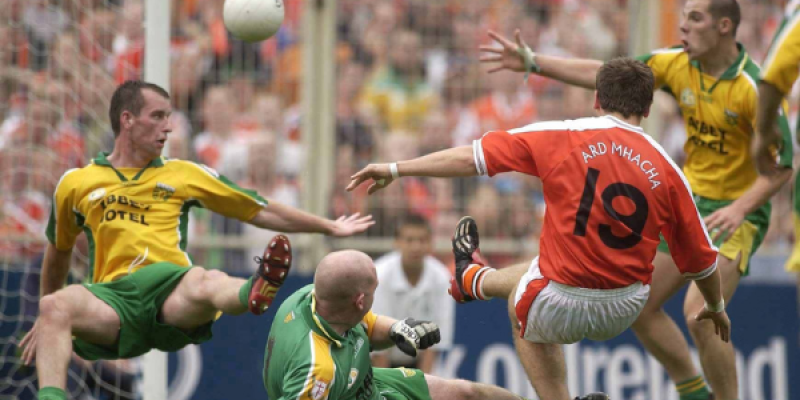 Armagh's Paddy McKeever nets a goal that was subsequently disallowed in the 2003 All-Ireland semi-final against Donegal. Photo: Sportsfile

Armagh. Time was when it seemed as if it was always bloody Armagh.

In the six Championship campaigns from 2002-2007, Donegal and Armagh crossed swords seven times.

Only once, via a fortuitous last-gasp Brendan Devenney goal in ’07, did Donegal get the upper hand.

There was a draw in 2005 and the rest followed similar paths.

Armagh held an imposing Indian sign over Donegal during those summers.

The first cut is always the deepest and the 2002 Ulster final was a sliding doors moment of sorts.

Donegal, in their first final in four years, kicked 14 wides and went 23 first-half minutes without scoring. Christy Toye scores a goal for Donegal against Armagh in the 2003 All-Ireland semi-final.

In spite of their ever-expanding tally of wides, Donegal hung in there, but a late Jim McGuinness goal was scant consolation after a 1-14 to 1-10 loss.

“The fact that we simply didn’t perform to our maximum is the most hurtful thing,” manager Mickey Moran reflected.

Donegal made their exit after a quarter-final replay defeat by Dublin and the subsequent fall-out saw Moran step down as manager.

“If we had got over the line in ’02, we might have been able to push on,” says Michael Hegarty, the wonder and the regret still evident 20 years on.

“That final got Armagh up and running really. In that All-Ireland, they were behind for a good while, but they came back and won it. They could always do that, Armagh: Dog it out.

“They could always hang in there. Nothing fazed them and they were very direct. They weren’t a great football team, but they could just overpower you physically; they could almost bully you in a way.”

In 2003, Donegal fell to an Ulster Championship defeat by Fermanagh. The hopes of the country were somewhere close to rock bottom.

Unable to source a replacement for Moran, Brian McEniff stepped into the vacancy that winter and by August 2003 Donegal found themselves in an All-Ireland semi-final.

Armagh 2-10 Donegal 1-9. Another dance with Armagh littered with ifs, buts and maybes.

“We were just going from year to year,” Hegarty says. “At a time we couldn’t even get a manager and no-one was willing to put their name forward.

“The County Board couldn’t keep a hold of Mickey Moran and they really should have done more to keep him. We were way off the pace in preparation and were just going from year to year.

“That sort of thing passes on to players. In 2003, we couldn’t even get a trainer and different men were coming into us from time to time. That was frustrating for players having different people coming in and out.

“You look at players now who are hand fed. They’re told where to stand, where to look, what to do. That Donegal team played off the bat. Donegal, as far as preparation was concerned, was way off and the team didn’t do itself justice.

“It showed how good the squad was where we still got to an All-Ireland semi-final -and could have won it.”

Donegal had Raymond Sweeney sent off three minutes into the second half with Christy Toye’s first-half goal daring them to dream.

What might have been had John McEntee been cited for an elbow on Barry Monaghan ten minutes from the end.

“You’d be well sore when you’d be finished with them, mind you.

“They put in so much work. They were in gym before any of us and they were a big team, all of them were over six foot.

“We had so many battles with them. It was funny how it was: We could never get over Armagh, but we could beat Tyrone, but then Tyrone could always get one over Armagh.

“Tat Armagh team had that ability to hang in there. Those one-on-one battles were very intense.”

Kieran McGeeney is patrolling the sidelines now as Armagh’s manager.

Back then, he was the imposing centre-back in direct combat with Hegarty.

“He always looked to play the ball,” the Kilcar man says. “He played hard, alright, and he was a very physical player, but there was no guff with him. To be fair, with most of that Armagh team there was none of that old bullshit.

“They were just a very resilient team.” “There wasn’t even a sandwich for us,” Brendan Devenney lamented as he trundled out of Croke Park.

McEniff was still the manager despite having indicated a desire to retire in the wake of the All-Ireland semi-final loss the previous year.

“I’m a county chairman who is looking for a team manager,” he had said at the close of the 2003 season.

Goals by Oisin McConville, Paddy McKeever and Diarmuid Marsden cut Donegal to the quick and in 2005 there was another false dawn.

Armagh needed a late, late point from McConville to earn a 0-12 apiece draw in an Ulster quarter-final. In the replay, Ronan Clarke, McDonnell and Malachy Mackin netted as Armagh won 3-11 to 1-10.

Devenney’s late goal was little more than a footnote. "A bit like the wasp stinging the elephant," as Joe Brolly put it on television that Saturday evening.

Brian McIver’s arrival saw Donegal win promotion from Division 2 in 2006 and they returned to the Ulster final with Michael Doherty scoring 1-4 in a semi-final win over Derry.

An injury saw Doherty miss the final at Croke Park. The tale of the tape was all to familiar with John McGrane’s goal the defining score as Armagh won 1-9 to 0-9.

Stephen McDermott might have snatched a late goal for Donegal, but Armagh were dominant.

“Michael Doherty was a big player for us and was going well inside,” Hegarty says. “Maybe if he had been there . . . you just don’t know what might have happened.

“We turned Armagh over then in Ballybofey in 2007, but Armagh were probably goosed at that stage.

“The funny thing is that the Donegal team that eventually beat Armagh wasn’t as good as the one that couldn’t beat Armagh. There was so much potential in Donegal during those years that we couldn’t get over the line against Armagh.”

Donegal were humbled during a now famous qualifier at Crossmaglen in 2010. Jamie Clarke left Donegal’s young corner-back Paddy McGrath dizzy, but the contras in fortunes was evident by 2015 when McGrath kept Clarke scoreless as Donegal eased to a 2-11 to 0-8 win at the Athletic Grounds.

Jim McGuinness arrived in the wake of the Crossmaglen hammering five years previously and Donegal would hit the high notes again.

“Things had to go in a different direction for Donegal,” McGrath says.

“There were big steps taken in around that time. That was a difficult day in Crossmaglen. It was my first start and I was looking forward to it so much.

“It was a bad day at the office and things just didn’t go right for us. In a way, it probably stood to us. We knew we just had to pull the socks up and, in fairness, we got things right at a key time." 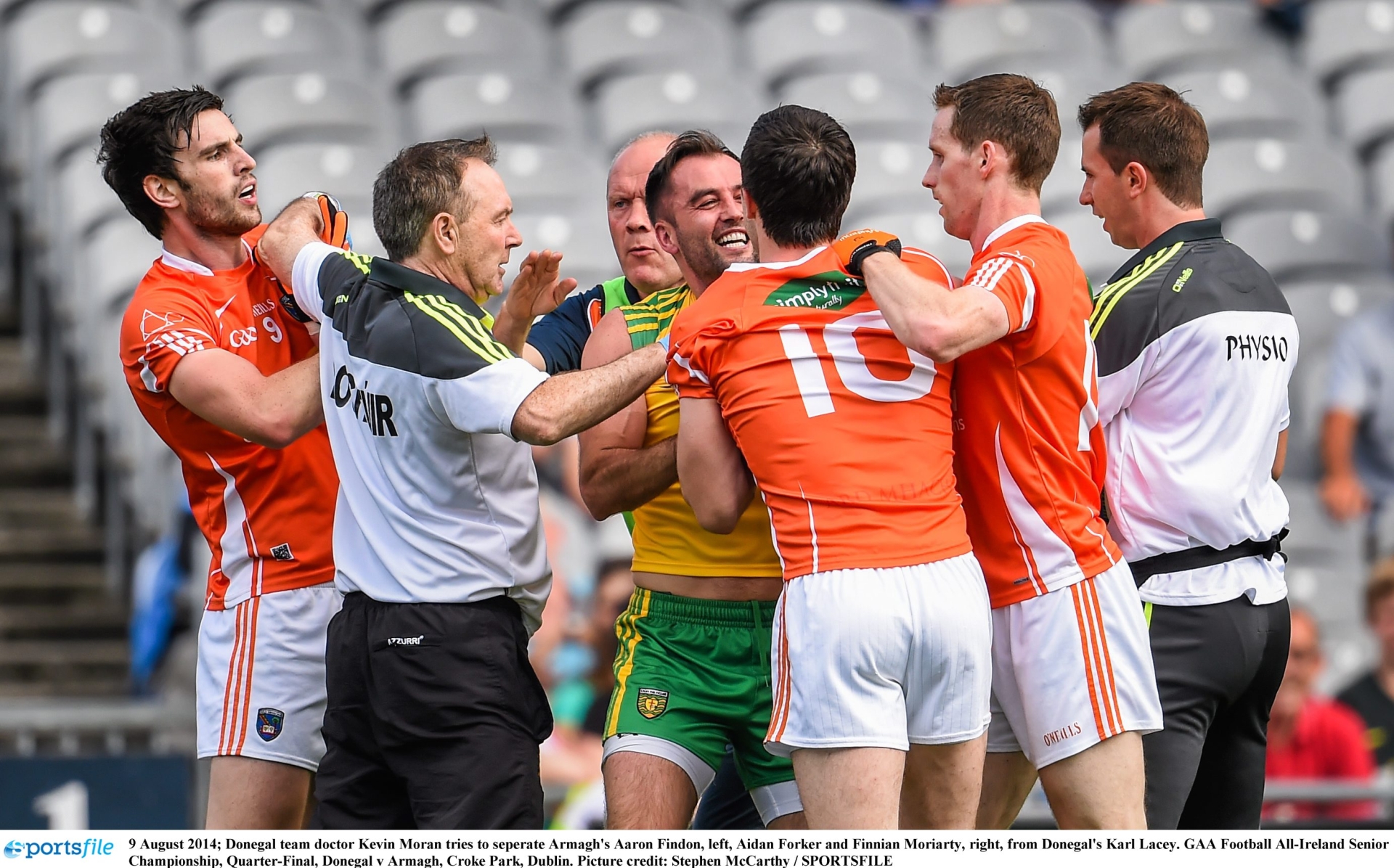 The edge between the two foes never blunted.

In 2014, Donegal team doctor Mr Kevin Moran found himself at the centre of a row in which he was pushed by Armagh player Aaron Findon. Donegal advanced through that All-Ireland quarter-final thanks to a late Patrick McBrearty point.

When Donegal were 1-22 to 0-13 winners in a 2020 game played behind closed doors due to Covid-19, McGeeney lamented:  “It is a good lesson for the boys but it is a harsh one. I just felt for the first time this year we were very timid and we did not have a go at them. We did not go at them and that was the most disheartening thing.”

Timid certainly wasn’t something that could have been said of McGeeney’s Armagh.

Nor was it a word McGrath would use to describe the Orchard.

“We knew we were always in a battle when it came to Armagh,” he says.

“Armagh were always strong and physical even at underage level. They were a real force in Ulster and they dominated for a lot of it. Donegal were on the receiving end of a lot of games against Armagh.”

The latest chapter will be written on Sunday.

McGrath and Hegarty are both adamant that Donegal will prevail.

“Their pace and power will be too much,” says McGrath. “Donegal are further down the road and have more experience.”

“Donegal aren’t getting enough out of some players,” Hegarty cautions. “That said, I think they’ll be too good for Armagh.”

Their League meeting in Letterkenny last month has set the scene - and it wasn’t as if this rivalry even needed a prelude to turn the temperature up.