When Donegal gave Cavan the blues

Donegal and Cavan faced one another four times in succession between 1989 and 1992 - all four of which provided pathways to the Ulster final, as Chris McNulty explains with Declan Bonner, Joyce McMullin and Tommy Ryan 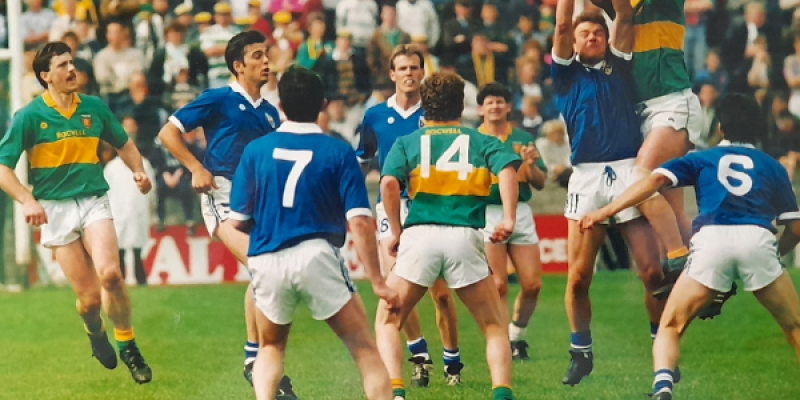 The confidence was so evident it bordered on arrogance. ‘Cavan Are Back’ screamed the banner unfurled in the stand at Breffni Park.

They’d always had a swagger, Cavan. Paul Hannigan, now the Head of College at Atlantic Technological University, Donegal, depicted Cavan’s over-confidence in the lead up to a 1989 Ulster Championship meeting with Donegal.

Hannigan traveled with a group of friends to the game and referenced Cavan’s long gone glory years.

Of Phil ‘The Gunner’ Brady, a three-time All-Ireland winner in the 40s and 50s, Hannigan said: “That fella, mighty player, sure he could kick a ball 200 yards out of two foot of water.”

It might have been 20 years since Cavan had won an Ulster Championship, but their tails were up in the summer of 1989.

They ran Dublin close in a National League semi-final a few weeks before hosting Donegal in an Ulster SFC quarter-final. Two points up down the home stretch, Cavan were caught by Dublin, but they showed enough in Croke Park for the confidence to soar.

The year previously, their Under-21s were pipped 0-11 to 0-9 by Offaly in the All-Ireland final. The dawn was false for the Breffni men, though.

“Cavan had arrogance because of their history,” says former Donegal forward Tommy Ryan.

“I worked in Cavan for a while, their people are fierce interested in football. If they get a team at all, they very much rally in behind them. Cavan were always hard to beat.”

The Donegal Democrat of the time reported: ‘A far too courteous Donegal left the escape door open for far too long . . . but finally Joyce McMullin slammed it closed and Cavan were back alright, to square one’.

“We had failed miserably the previous two years,” McMullin says. “That was a Championship breakthrough of sorts for us.

“Tom Connaghan had started something and we realised in 1989 that the players were there. That year was the end of Tom’s era, though.” 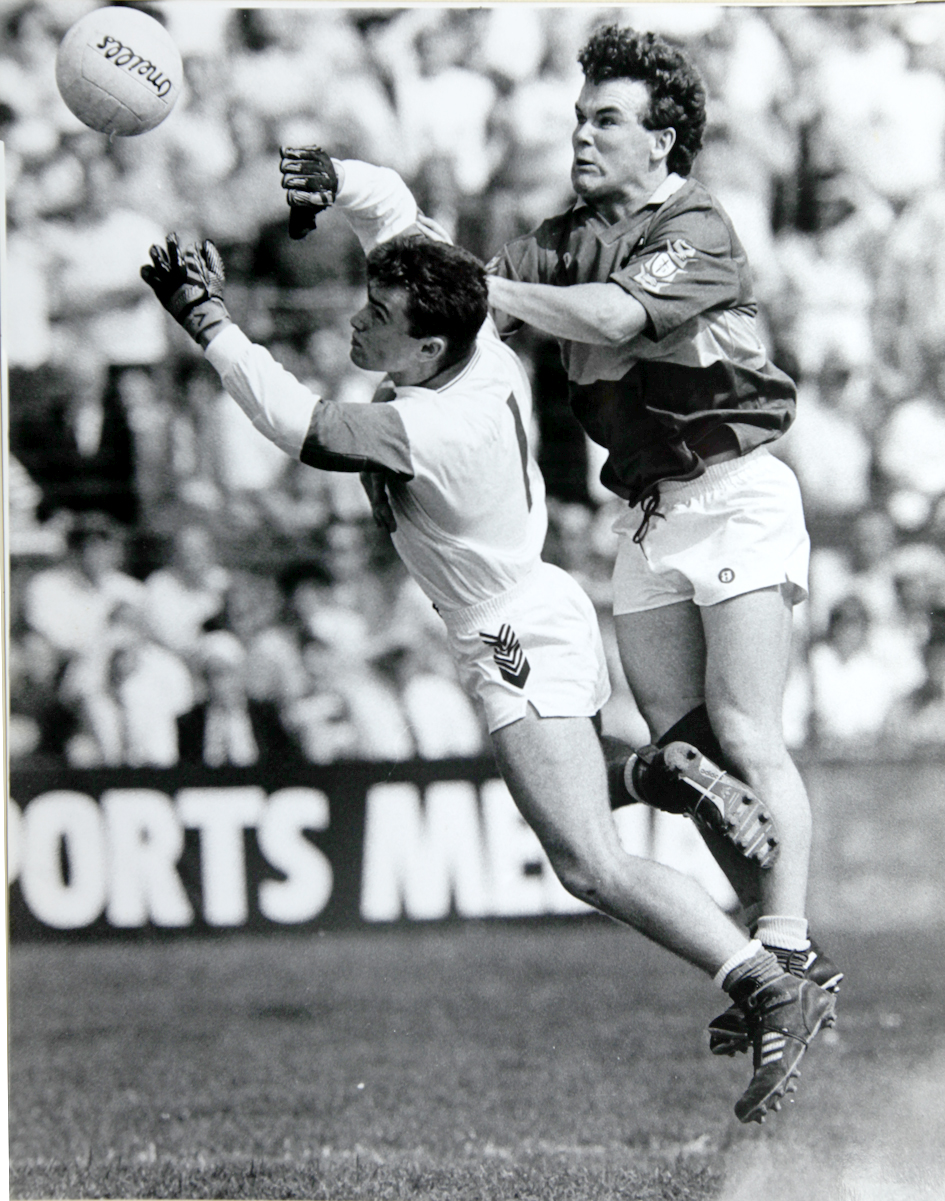 McMullin’s brace helped Donegal pull away and outscore Cavan 2-4 to 0-3 in the second period.

“Cavan were tipped to beat us that day, I remember,” Ryan says. “We took chances and just managed to get ahead of them. We done enough. It was a good result and one of those days where we did reasonably well.”

Donegal lost the Ulster final after a replay to Tyrone, but on their way to winning the Anglo Celtic in 1990, they accounted for Cavan again in a quarter-final.

A 0-13 to 0-9 win in Ballybofey was described by the Democrat as ‘a scrappy dirty best forgotten game.’

The teams were level eight times in all over 70 minutes with Donegal making ‘woeful waste of lavish possession’.

Declan Bonner was sent off alongside Cavan corner-back Pat Faulkner in the 29th minute.

“I still haven’t found out why I got the line,” says the current Donegal manager 32 years on. “There was nothing as competitive as Ulster in those years.

“We had some big battles with Cavan. They were always a very strong traditional football county and they prided themselves on their Championship wins in the past.”

Donegal made hard work of a four-point win, but went on to win a first Ulster title in seven summers. “Cavan did that to us,” McMullin says.

“Even with poorer teams, they made up for it. At home, they had an extra man attitude and they put everything into it. That was their strongest characteristic; they fought to the bitter end.

“We had a good record against them and always managed to beat them, but we rarely had it easy.”

Goals by Michael Gallagher and Anthony Molloy sealed a straightforward 2-14 to 0-12 win in 1991, but Donegal were caught by Down - the eventual All-Ireland champions - in the final.

That afternoon, the Democrat pointed out, Cavan were ‘relying more on heart than ability’.

A year later, Cavan’s heart came through again. There was little on a broiling Breffni Sunday in late May 1992 to suggest that Sam Maguire was destined for the Hills.

A 1-15 apiece draw in Cavan town had Donegal searching their souls.

Damien O’Reilly conjured up a late point to level it just after Martin McHugh - who scored 1-5 - looked to have scraped a win for a wasteful for Donegal.

The wides tally stood at 17 when the referee, Jim Curran, called for the ball.

“Cavan weren’t the finished article but by Jesus you always got the battle. I liked playing against them because you always knew what you’d get and we always played reasonably well.

“It was very evident with them that they were a really proud football county. The tradition stood to them and they believed. They had the chests out. They were strange enough characters. Some of them mightn’t have been very good players, but they made themselves look big and they behaved as if they were great players.

“That was what they had; tradition. It was like: ‘We have the blue jersey on and we’ll be hard to beat. That is still there in Cavan teams.”

A week later in Ballybofey, Donegal made no mistake. ‘Donegal took Cavan apart,’ was the neat summary of the Democrat.

“We knew that we had to lift it,” Bonner says. “Mind you, the alarm bells didn’t really go off until we got over Fermanagh in the semi-final. We could see in ’92 that we were going the same route as ’89 and ’91 and something just had to change. There was a new edge to us after we beat Fermanagh and, I suppose, the rest is history,

“We were lucky enough to get out of Breffni. We got the job done in the replay, but that game - and that year - could have ended so differently.”

Brian Murray and Anthony Molloy partnered at centre-field for the first time in two years. Eleven of the All-Ireland final team would start in the replay, Donal Reid having also come into the XV at Paul Carr’s expense.

Six points from Bonner helped Donegal to a 0-20 to 1-6 win and Cavan entered the record books for the wrong reason. It was the first time in their history that they failed to get past the first round of the Ulster Championship four years in a row - falling to Donegal each time. Cavan failed to trouble the scoreboard operator between the fifth and 38th minutes.

Cavan unraveled in the replay with Philip Smith sent off eight minutes before half-time for throwing a punch at Ryan.

“That man would’ve kicked your picture,” the Termon man says. “We knew that day that we just had to put the game away. We wouldn’t have even been in a replay if we had done that the first day.

“We were fortunate in a way to get out of Breffni with the draw, but of all days that was one day where you absolutely couldn’t fault the effort. We were on top of everything.

“Cavan always had five or six men who were all big and powerful, Stephen King and those type of men. Any day you played Cavan, you knew you were playing.

“It’s the same now: Cavan will rise to the occasion and battle it out. Donegal need to be ready.”