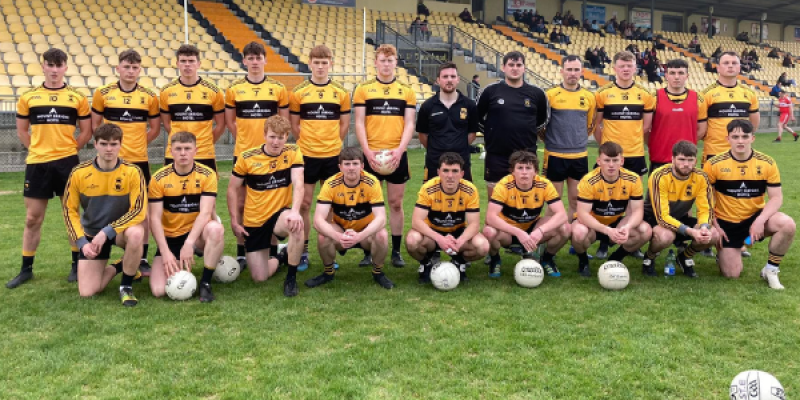 St Eunan's who defeated Glenfin on Saturday evening in Division 1.

St Eunan’s breezed past Glenfin in a lukewarm Division 1 encounter at O’Donnell Park on Saturday evening.

Conor O’Donnell’s goal late in the first half let daylight in and second-half majors from Eoin McGeehan, Cormac Finn and Noel O’Donnell took the black and amber out of sight.

In added time at the end of the first half, after Karl McGlynn arrowed wide following good approach work by Ross Marley, Frank McGlynn and Ciaran Bradley, St Eunan’s twisted the knife.

Conor O’Donnell junior scurried away from the Glenfin rearguard and coolly slotted past the advancing Andrew Walsh.

Goals were key as Tyrone overcame Donegal in Killyclogher

The Letterkenny men had started swiftly with Ronan McGeehin’s brilliant early brace getting them off and running before O’Donnell added to the tally.

Karl McGlynn and Odhran McGlynn brought Glenfin back into it, but a trio of scores from Darragh Ellison, Eoin McGeehin and Ciaran Moore opened up a four-point lead.

A superb save from St Eunan’s goalkeeper Eoin O’Boyle kept the sheet clean when Aaron McGlynn broke away and the same player was unable to convert the rebound.

Five minutes into the second half, O’Donnell surged deep into Glenfin territory before teeing up Eoin McGeehin to slam home a second St Eunan’s goal, opening up a 2-8 to 0-5 gap.

Ten minutes from the end, Ronan McGeehin and O’Donnell combined in a deadly attack polished off by the in-rushing Finn.

Just two minutes later, after O’Boyle tuned over from Daniel McGlynn at the clubhouse end, St Eunan’s added a fourth goal. Denied initially by Walsh, Noel O’Donnell steadied himself to steer in.

A pair of late David Boyle scores took the margin to 15 as St Eunan’s - again - demonstrated the depth of their reservoir.