Second half goals enough to see Donegal into Ulster final 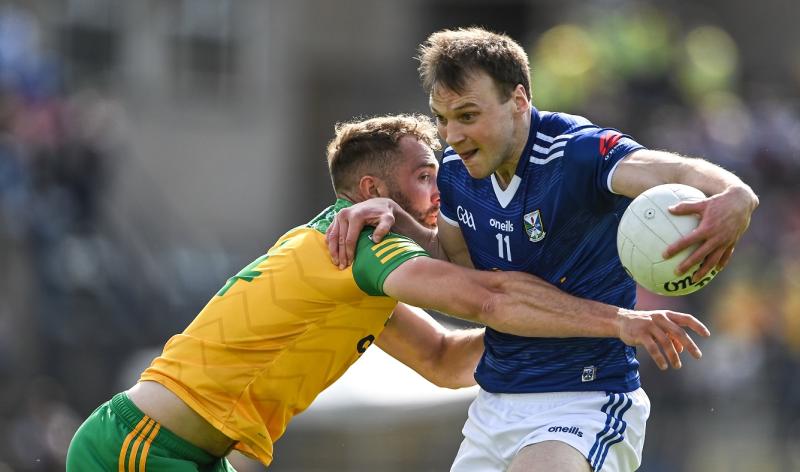 Donegal reached their 10th final in 12 years with a polished second half display to get the better of a gritty Cavan side in the semi-final in St Tiernach's Park, Clones.

Donegal 2-16
Cavan 0-16
Donegal started with the same 15 as against Armagh but they found the going tough for much of the opening half.
But when they got the advantage of the slight breeze in the second half they gradually got on top but it took a rather fortuituous goal from substitute Conor O'Donnell to finally rid them of the Cavan shackles.
From the throw-in Cavan showed they were up for the game with Thomas Galligan winning the ball and the quick transfer had Paddy Lynch working the scoreboard operator after just 17 seconds.
That was the pattern of the first half with Donegal dominated around the midfield and Cavan eager to transfer the ball by foot and winning quite a few of the tussles.
Only Stephen McMenamin was winning his battle in defence but in fairness Eoghan Bán Gallagher was Donegal's main driving force in the early stages. He won two frees for Michael Murphy and Patrick McBrearty to fire over.
The sides were level at 0-2 each before Cavan pushed two clear through two Lynch frees. Ciaran Thompson finished a great Donegal move which started with Jason McGee winning a turnover on his own 13m line.
James Smith and Jamie Brennan traded scores as did Smith and Murphy (free) with Donegal almost in for a goal but their passing was just a little off - a feature of the first half.
Two Thomas Galligan points within a minute pushed Cavan three clear - 0-8 to 0-5 but Donegal responded with the lively Jamie Brennan and another Murphy free after Shane O'Donnell was fouled.
Lynch had his fifth point of the half for Cavan on 25 minutes but the Breffni men were lucky to remain at 15 when full-back Padraig Faulkner fouled Patrick McBrearty with what looked a very high challenge. McBrearty recovered to tap over the free and a minute before the break he was involved before Jamie Brennan fisted over to leave the sides all square at the break - Donegal 0-9, Cavan 0-9.
Donegal had a lucky escape just before the break when James Smith hit the crossbar with Shaun Patton getting a hand to it.
The sides traded points within four minutes of the restart, James Smith for Cavan and Peadar Mogan for Donegal, who were forced into a substitute on the throw-in, Hugh McFadden sustaining an injury which saw Caolan McGonagle introduced.
Then Jamie Brennan put Donegal ahead for the first time and Michael Murphy doubled the lead on 42 minutes.
Murphy added another from a free after Jamie Brennan was almost in but back came Cavan with James Smith with a forward mark and Gearoid McKiernan.
With both sides finding it difficult to penetrate, Eoghan Bán again made inroads for Donegal for Caolan McColgan to point but almost immediately Gearoid McKiernan hit back at the other end and then after a turnover in the middle, McKiernan had the sides level at 0-14 each on 57 minutes.
Eoghan Bán was again involved as Patrick McBrearty edged Donegal ahead. Jamie Brennan went for a point but it dropped short and broke for the inrushing Conor O'Donnell to fly kick to the net.
Raymond Galligan landed a long range free but another high ball, this time from Niall O'Donnell, was dropped by Killian Clarke and Patrick McBrearty punished with the second goal.
Aaron Doherty rattled the crossbar and the ball seemed to cross the line but came back out while Paddy Lynch had a final Cavan point.
Donegal were able to introduce veteran Neil McGee for his 193 'cap' to a rousing ovation.