Nickey Rackard dream over for Donegal as Tyrone withstand fightback 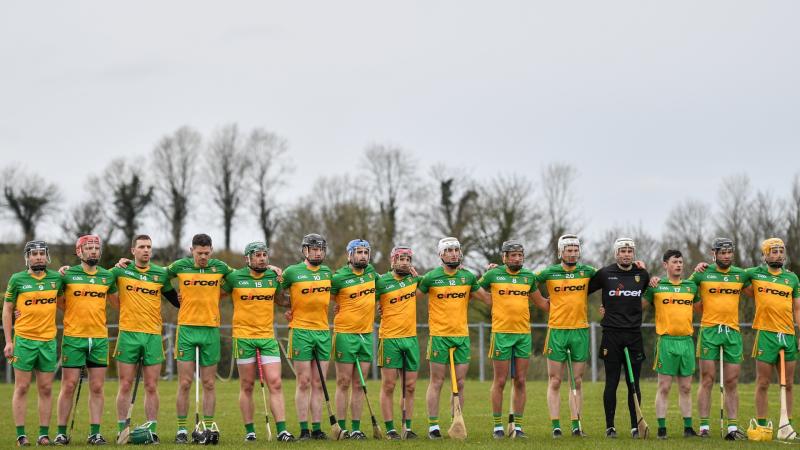 Donegal were defeated by Tyrone in Carrickmore

Damian Casey and Tyrone withheld a superb Donegal second-half comeback to earn a place in the Nickey Rackard Cup final.

Donegal looked well beaten as they trailed by eight points some seven minutes into the second half in Carrickmore as a Casey-inspired Tyrone led by 1-13 to 0-8.

But Mickey McCann’s men upped a few gears and Ritchie Ryan’s booted goal in the 43rd minute gave a glimmer of hope.

From then to the bitter end Donegal fought like trojans and there was a mighty cheer when Ryan equalised in the 60th minute as the sides were locked on a score of 1-18 apiece.

And, that revival was also sparked by a mighty display by second half sub Liam Óg McKinney from Burt who hit three great points.

Luke Barrett's side were 16 points up at one stage in the first half and although Monaghan mounted a spirited comeback to trail by just three at a stage, Donegal kicked on to win by eight

All the momentum seemed to be with Donegal, but it was then that Casey and Tyrone showed character in spades. Firstly Casey’s shot from the sideline was bundled to the Donegal net by Sean Óg Grogan but referee James Judge ruled that it was a square ball.

That was a blow that Tyrone absorbed in a heartbeat and it was fitting that Casey got the next two points as players fell like flies in the crippling heat of the sun.  And he book-ended a brilliant day with a text book side line cut to cement a display for the ages.

But the big bull elephant in the room for Donegal was the unavoidable absence of their best player Davin Flynn, who was on his honeymoon. His ability to win loose ball, and deadly accuracy from play and frees was badly missed and it could well have been a different result, had he been there.

A confident Tyrone side started as they meant to go on after just two minutes when ex-Antrim star CJ McGourty flashed over a snappy point after just two minutes. And that pretty much set the pattern for the remainder of the half, where outgunned but wasteful Donegal racked up ten wides playing into the breeze.  Daire O’Maoileidigh levelled for Donegal and then marksman Damian Casey converted a soft free for the home side.

Two lightning points from Declan Coulter put Donegal into the lead for the first and only time in the half.  But the key score came for Tyrone in the eighth minute when the excellent Casey gained possession, took at least 12 steps before finding the net.

Tyrone were ahead by 1-2 to 0-3 and it was a lead they were never to lose.  Casey was very prominent in this early stage and he, Chris Kearns and Lorcan Devlin pushed the home side to a 1-7 to 0-4 by the 20th minute.

Donegal were losing most of the major battles and were grateful that veteran Danny Cullen weighed in with two timely points as did O'Maoileidigh from frees.

Ronan McDermott got on the scoresheet in the 28th minute to leave Tyrone leading by 1-9 to 0-8.  But the rampant Red Hands could have had two more goals as the match headed for the break. Firstly it took a superb last ditch block from Conor O’Grady to deny Tyrone Sean Óg Grogan a certain goal in the 30th minute and Grogan had another gilt edged chance which he somehow spooned over the bar in the 33rd minute as Tyrone deservedly led by 1-11 to 0-8 at the break.

It was Tyrone who restarted brightly, and they had moved into a 1-13 to 0-8, before Ryan’s goal sparked that mighty comeback.  And it looked like they had the whole momentum going into those final frenetic moments. But Tyrone walked tall when it really mattered, especially Casey and Lorcan Devlin.

However, apart from the unavoidable absence of Davin Flynn, Donegal will be wondering about those 15 wides as well.