No safety net now as Donegal and Armagh joust again 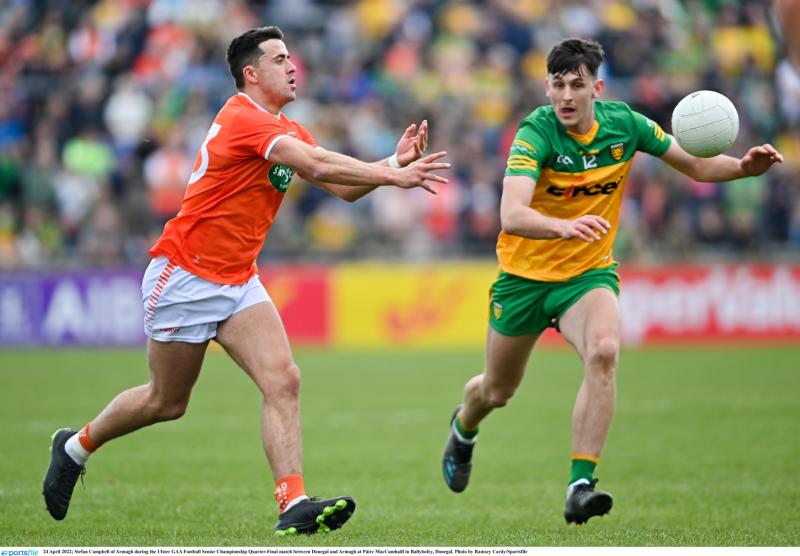 Stefan Campbell in action against Michael Langan when the sides met in April Picture; Sportsfile

When Declan Bonner turned the dial of his radio to RTÉ Radio 1 on Monday morning, he could almost sense what was coming.

For the first time in three campaigns - Covid-19 meant truncated championships in 2020 and 2021 - the qualifiers are back and Donegal’s ball was in Monday’s pot.

Last Sunday, Bonner watched as Armagh defeated Tyrone 1-16 to 1-10. Aidan Nugent’s goal in the first half, and a superb display from goalkeeper Ethan Rafferty - used as a marauding outfielder at times - saw the Orchard send Tyrone, the Sam Maguire holders, hurtling out of the Championship.

After a long road, Emer Gallagher is ready for the 100 club

Emer Gallagher sustained a cruciate knee ligament injury last summer in her 99th game for Donegal. Now, she feels ready to join the elite band of players to reach the 100 mark

Donegal and Armagh have jostled twice in high-octane games recently.

In late March, Donegal prevailed 1-14 to 1-13 in a game that saw Bonner’s men preserve their top-flight status in the League.

A jagged end to the game resulted in suspensions being handed out.

By the time Armagh rolled into Ballybofey for an Ulster SFC quarter-final four weeks later, they had all of the sanctioned Rian O’Neill, Stefan Campbell, Ciarán Mackin and Aidan Nugent available for selection. Donegal, meanwhile opted not to object to the suspensions of Odhrán McFadden-Ferry and Neil McGee.

Patrick McBrearty struck the goal as Donegal won 1-16 to 0-12 in their most impressive Championship outing for some time.

“I just felt since watching Armagh-Tyrone on Sunday. . . I had that feeling that it would be Armagh,” Bonner said. “Both teams know each other really well. This weekend’s is a game that will go right to the wire.”

Donegal have had just two weeks to shake off the remnants of the 1-16 to 1-14 defeat by Derry in the Ulster final. 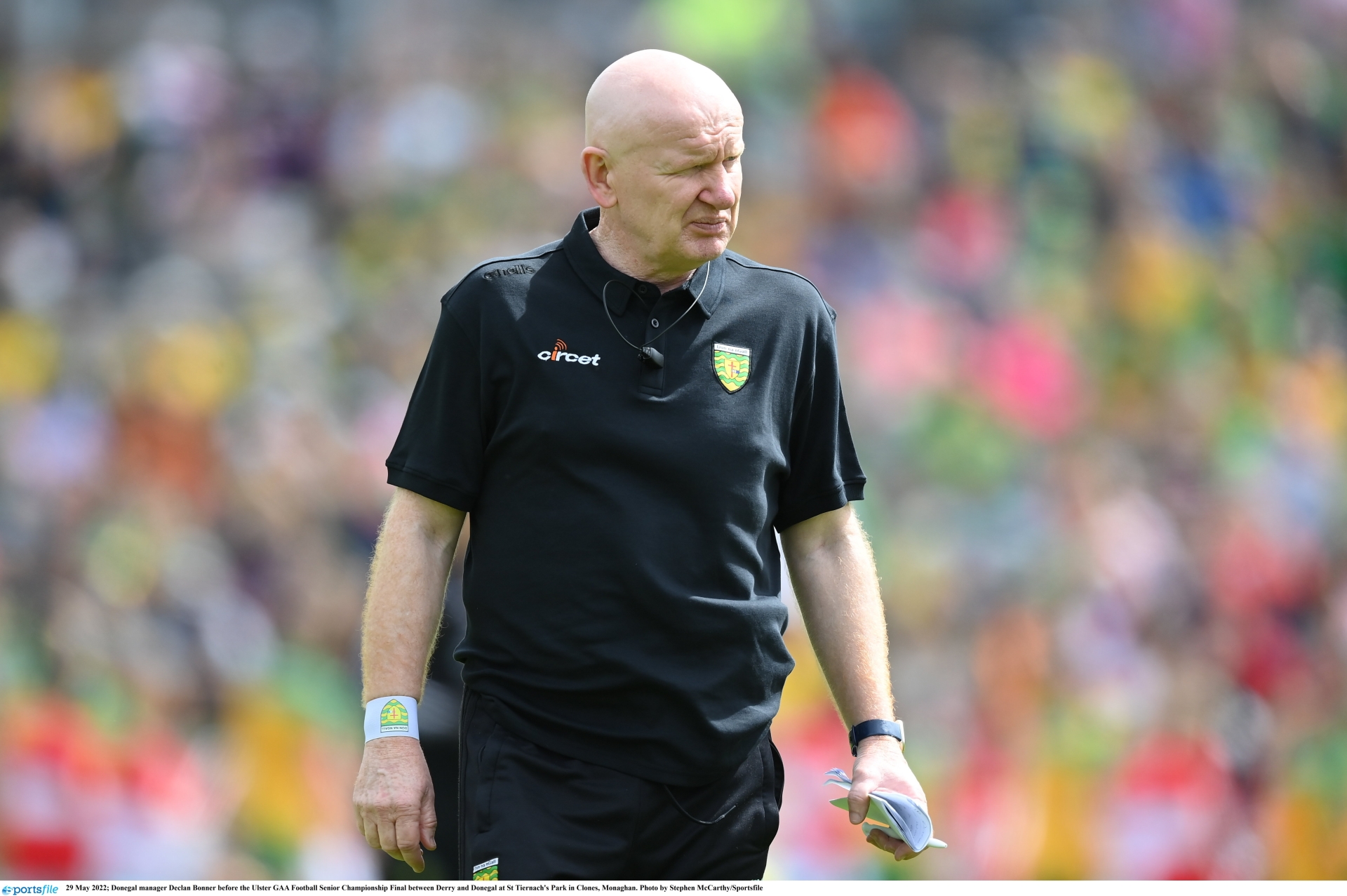 The intervening weeks between their loss in Ballybofey and the weekend’s dispatch of Tyrone offered Armagh the chance to find their feet.

Now, it’s sink or swim time for both.

“There’s no back door, side door or any other door now. We have an opportunity now that we didn’t have in the last two seasons and we need to make the most of that. There’s a huge price on offer this weekend.”

For Bonner to be tuning in to Radio 1 again next Monday, his side will likely have to go through the wringer again in Clones on Sunday.

“Armagh were impressive all over the field on Sunday,” he said. “They were the better team against Tyrone and could have been a lot more than a point ahead at half-time. They were impressive and they’ll present a serious challenge for us. We know that and we have to be ready for that. Armagh have some of the best forwards in the business and are a powerful, physical side.

“This will be a real battle and we need to be ready for the task. It’s one that we’ll relish.”

The Donegal manager insists that, barring long-term injury absentee Oisin Gallen, he will have a full deck of cards to shuffle at St Tiernach’s Park.

A suggestion that his captain, Michael Murphy, carried a knock into the Ulster final against Derry was swiftly knocked back by Bonner this week. Others, like Eoin Ban Gallagher, Peadar Mogan and Michael Langan appeared to be gingerly moving at the end of the Ulster final.

“We have come through the last ten days fairly well and we should be fine.

“We have to go out and produce a performance. We know we have a job to do against a very good Armagh. We’ll need to perform at the very highest level. It will take a huge effort from everyone involved, including the guys coming off the bench.

“We just need to get our own end right and the preparations have gone well on the pitch in the last week. It took a number of days to get over the disappointment of the Ulster final, but we had to get back at it and it’s been full focus on Armagh this week.”

Derry’s win over Donegal saw the Oak Leaf clinch a first Ulster title since 1998. Bonner was also the manager of the Donegal side that was beaten by a late Joe Brolly goal 24 years ago.

“The disappointment now is no less,” Bonner said. “We had no second chance in ’98. Now, we have to turn it around fairly quickly and its always a challenge - emotionally, mentally and physically, ever way - to do that. It takes a bit of time, but when you’re representing your county, you know the effort and what’s involved.

“The knock-out nature of this week’s game adds to that.”

Some sharp criticism was levelled Donegal’s way in the days after the Ulster final. Donegal were two points up, 1-12 to 1-10, with a little more than ten minutes remaining.

Derry hit back to force extra time before taking the prize.

“The reason we got two points up was how we had set up,” Bonner said.

“We felt that the biggest disappointment was that we were two points up and we just didn’t kick on.

“Monaghan and Tyrone set up sort of more traditionally against Derry and it didn’t work. Our game against Derry was always going to be a different type of game. I don’t get where that point about our set-up is coming from. We were into the last quarter a point or two other way; that’s how we always saw it going.”

“We have moved on fairly quickly from the Derry game. We’ve had to.”

The prize now is a place in an All-Ireland quarter-final.

The alternative is the end of the line in 2022.