Donegal Ladies pushed all the way by Waterford in Birr 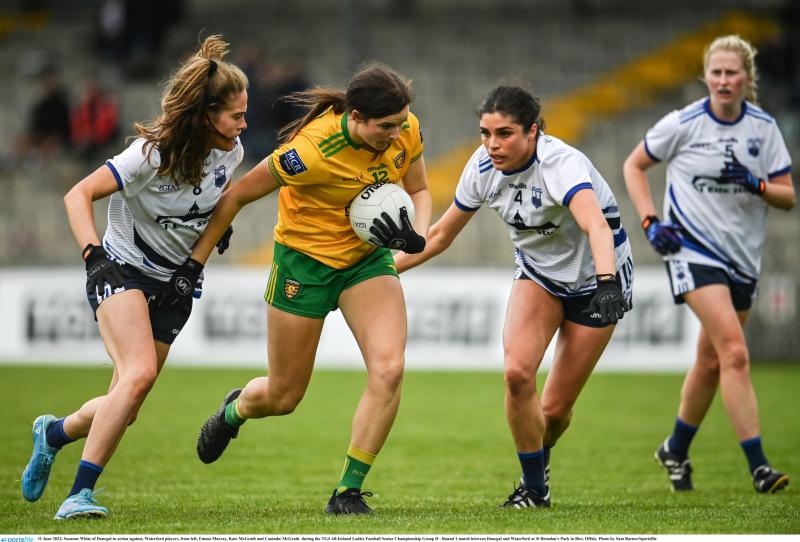 Susanne white in action for Donegal against Waterford in Birr Picture: Sportsfile

Donegal Ladies got back to winning ways in the first of their group games in the TG4 All-Ireland Senior Championship when they defeated Waterford in St Brendan's Park, Birr.

It wasn't easy for Maxi Curran's side as Waterford put it up to them in the second half, after Donegal had gone six points clear.

The Deise ladies missed a penalty but then got a goal which left it a nervy finish for Donegal.

In a torrential downpour during the first five minutes, it was difficult for both sets of players. Waterford took the lead playing with the breeze through Hannah Power.

Lauren McGregor edged Waterford ahead again a minute later but that would be their last score of a very defensive first half.

Donegal lost Evelyn McGinley to the sin bin on 16 minutes and one of the Waterford defenders was lucky to escape with a tick minutes earlier after a trip on Niamh Hegarty.

Katy Herron had Donegal on terms on 18 minutes and there would be just one more score, Geraldine McLaughlin converting a free after Yvonne Bonner was fouled on 22 minutes. McLaughlin almost had a goal a couple of minutes earlier when an effort for a point dropped short and the bounce almost caught out the Waterford 'keeper.

Geraldine McLaughlin won and pointed a free within three minutes of the restart but then Donegal had a let-off when Katie Murray was upended but Kelly Ann Hogan hit the penalty wide.

Geraldine McLaughlin added to the Donegal lead with two frees and Susanne White stretched the lead out to 0-8  to 0-2 by the 40th minute.

But Donegal began to lose their way and Waterford stormed back into the game. A point was followed by a goal by Aisling Mullaney to leave just two between them.

Geraldine McLaughlin almost had a goal as she won a kick-out and almost lobbed the 'keeper but the ball went just over the crossbar.

But still Waterford kept coming with two further points and indeed they should have been level after Kelly Ann Hogan hit a free wide with eight minutes left.

Yvonne Bonner lofted a good point to push Donegal two clear. Waterford had a great chance from a free but it was well wide.

Donegal had to withstand some pressure but unlike in the Ulster final, they held on to take the victory.