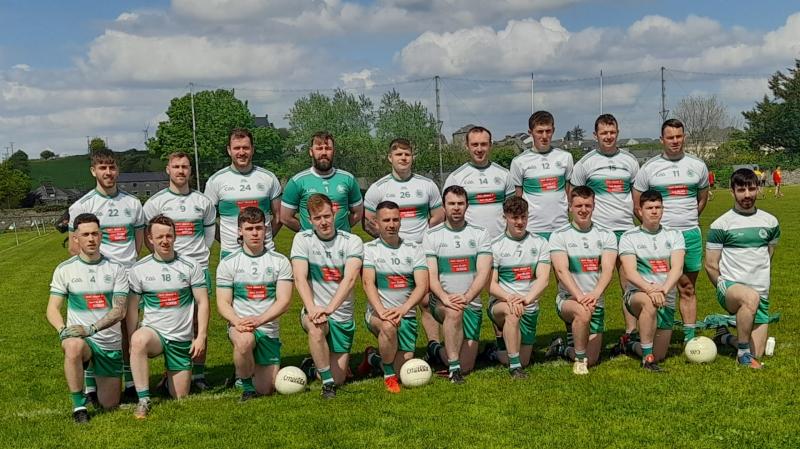 Aodh Ruadh . . . another win in league

There were two contrasting halves of football in Munday's Field as Aodh Ruadh came from five down at half-time to get a seventh win of the campaign.

To say the first half was boring would have been the understatement of the year. The home side can be blamed for most of it, getting all behind the ball trying to thwart Glenfin, who were playing against a swirling breeze.

Aodh Ruadh introduced Philip Patton two minutes from the break and his entry was delayed by as much as five minutes as Glenfin held possession. Just after his entry,  the call went out from the Aodh Ruadh dugout 'man to man'.

The half ended 1-3 to 0-1 in favour of Glenfin and they were fully deserving of the lead as they played most of the football with Karl McGlynn outstanding and full-forward Ciaran Brady getting 1-1 from play. The goal came after Karl McGlynn could have taken a mark, but played on and set up Brady for an easy finish.

Shaun Ward got their other two points from frees while David Dolan had the sole Aodh Ruadh point.

The second half was a breath of fresh air as both teams were set free to play football. The Aodh Ruadh side was like a new team as Michael McKenna fisted their second point inside 10 seconds.

McKenna was on fire, adding a second on 34 minutes before Luke McGlynn replied for Glenfin. Darren Drummond traded with Shaun Ward, who found the range from a 55m free. David Dolan and Luke McGlynn added a point each to their side, Dolan with his right while almost down on his left knee.

There were just 12 minutes played and it was already making up for the first half.

Aodh Ruadh then had a real purple patch, hitting five unanswered points to go 0-10 to 1-6 ahead by the 51st minute. The points were all great scores - three from Diarmaid McInerney (one free) and the others from David Dolan and the impressive Michael McKenna.

With just over six minutes left Glenfin lost Mark McGinty jnr to a black card for a foul on one of Aodh Ruadh's stars of the evening, Gary Carty. But despite that Jason Morrow hit a magnificent point to draw them level with four minutes left.

Both sides had chances before Darren Drummond made his physique count as he cut through a minute into added time to hit a point which was a worthy winner.

If only we could have had that second half football from the start. It was a great workout for both sides and Glenfin can be a little miffed that they didn't get a draw with Frank McGlynn leading from the back. Aodh Ruadh will be happy to have won a game despite being without captain Colm Kelly (injured) and Nathan Boyle (holidays).