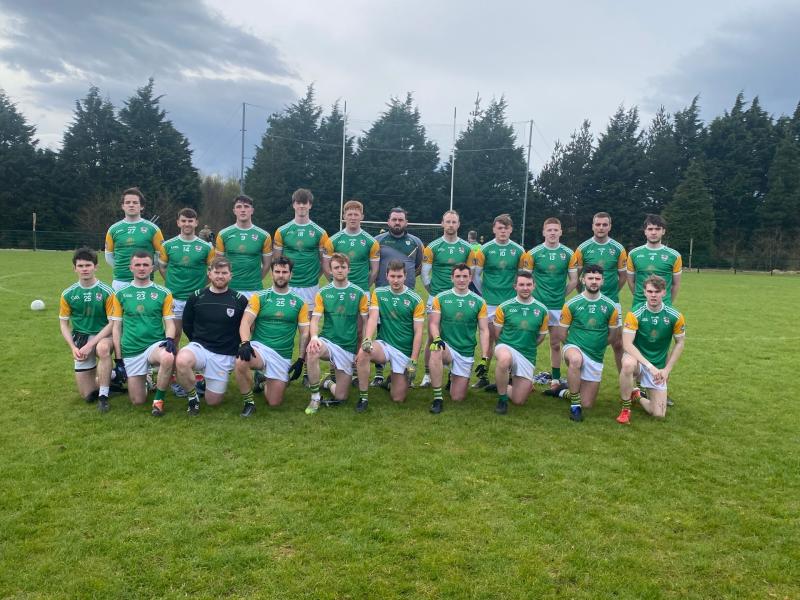 Downings have been in impressive form in Division 2

Downings maintained their push for promotion with a eight-point win over Naomh Columba on Saturday evening.

Johnny McGroddy top-scored once again with seven points while Alan Pasoma marked his return from a lengthy injury lay-off with a goal and two points.

Pasoma, in free role, covered every inch of Pairc Na Dunaibh. And his goal at the end of a sweeping move on the stroke of full-time was rewarded for his tireless running, prodding and probing over the previous 60 minutes.

It came at the end of a good workmanlike performance in difficult playing conditions of a crossfield wind and heavy rain in the second half. Oisin and Shane Boyce were on top in the middle of the field and McGroddy and Pasoma ran the show up front with Paddy McElwee at full forward playing a supporting role for the winners.

The high-fielding of Shane Boyce in the middle of the field as he raked the sky a number of times in both halves, was a joy to behold for supporters of the traditional game. James Lee McBride and Keelan McGroddy got forward and kicked a point each as Downings chalked up a seventh straight win.

And with bottom teams Moville, Red Hugh’s and mid-table Buncrana to come in their last three games they are in pole position along with table toppers Malin for the two automatic promotion places.

Aaron Doherty returned from county duty for his first appearance of the season for Naomh Columba, who were short a number of regulars due to injury.

Doherty was named at centre half-back but played a more midfield forward role but with no great job.

He kicked two points one of the from play while county U2O Eric Carr chipped in with two points as well for the men from Pairc Na nGael, both from play and was his sides best performer.

Ryan McNern made a timely and welcome return from injury for the final quarter and in the short while he was on the field he kicked two points.

Downings were on the front foot from the off and after Johnny McGroddy and Aaron Doherty traded early close in frees they kicked on.

And while Naomh Columba packed the defence the locals still led 0-5 to 0-2 at the end of the first quarter hour and had stretched the lead out to 0-9 to 0-3 by half-time.

Eric Carr, with his second point, and Ryan McNern with his first possession after being introduced, cut the lead back to six.

Johnny McGroddy, Paddy Byrne and McNern traded points before Pasoma got on the end of a turnover in the middle of the field to fire into an empty net as Paddy Byrne scurried back from out the field.