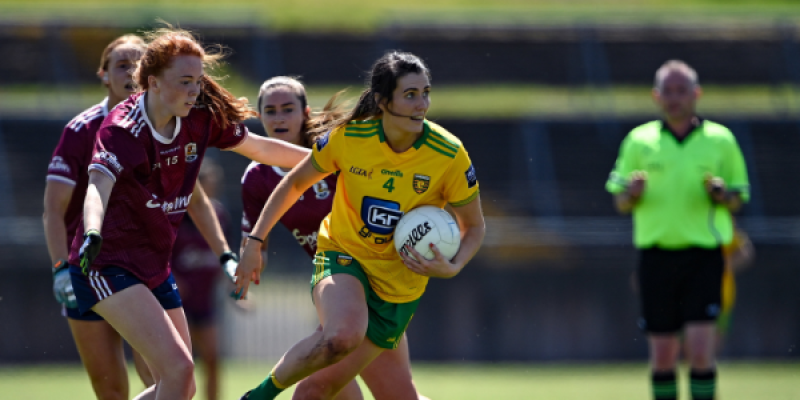 Emer Gallagher on the ball for Donegal against Galway. Photo: Sportsfile

Emer Gallagher waited a long time for the milestone to arrive.

There had been fuss before around her 100th game. A year ago, on July 24, 2021 to be precise - she recites the date without needing to think now - Gallagher ruptured an anterior cruciate ligament (ACL).

The local newspapers screamed at her. The TG4 All-Ireland Ladies Championship game against Kerry in Tuam was Gallagher’s 99th time in a Donegal senior shirt. The renowned Donegal GAA statistician Fr Sean Ó Gallchóir had the numbers totted but when Gallagher sat to read the glowing tributes she knew it would be a long wait to reach the magical 100.

Gallagher underwent surgery at the Santry Sports Clinic on August 24 and intensive rehabilitation under the direction of physios Tommy Kerr and Shane McClean and strength and conditioning coach Paul Fisher, began.

Niamh McLaughlin: ‘After all that we’ve been through, we’re still here’

By Saturday evening, Niamh McLaughlin could be the first Donegal captain to lead her team to an All-Ireland Ladies SFC final. An hour in her company makes you realise there’s a book in her, with a career that has taken so many twists and turns at the very top level in two codes. But there’s still chapters unwritten ...

This year will be the first time since 2013 that Dublin won’t contest the All-Ireland final.

“It was a really under the radar sort of process, in terms of how I was coming back into the training,” Gallagher says. 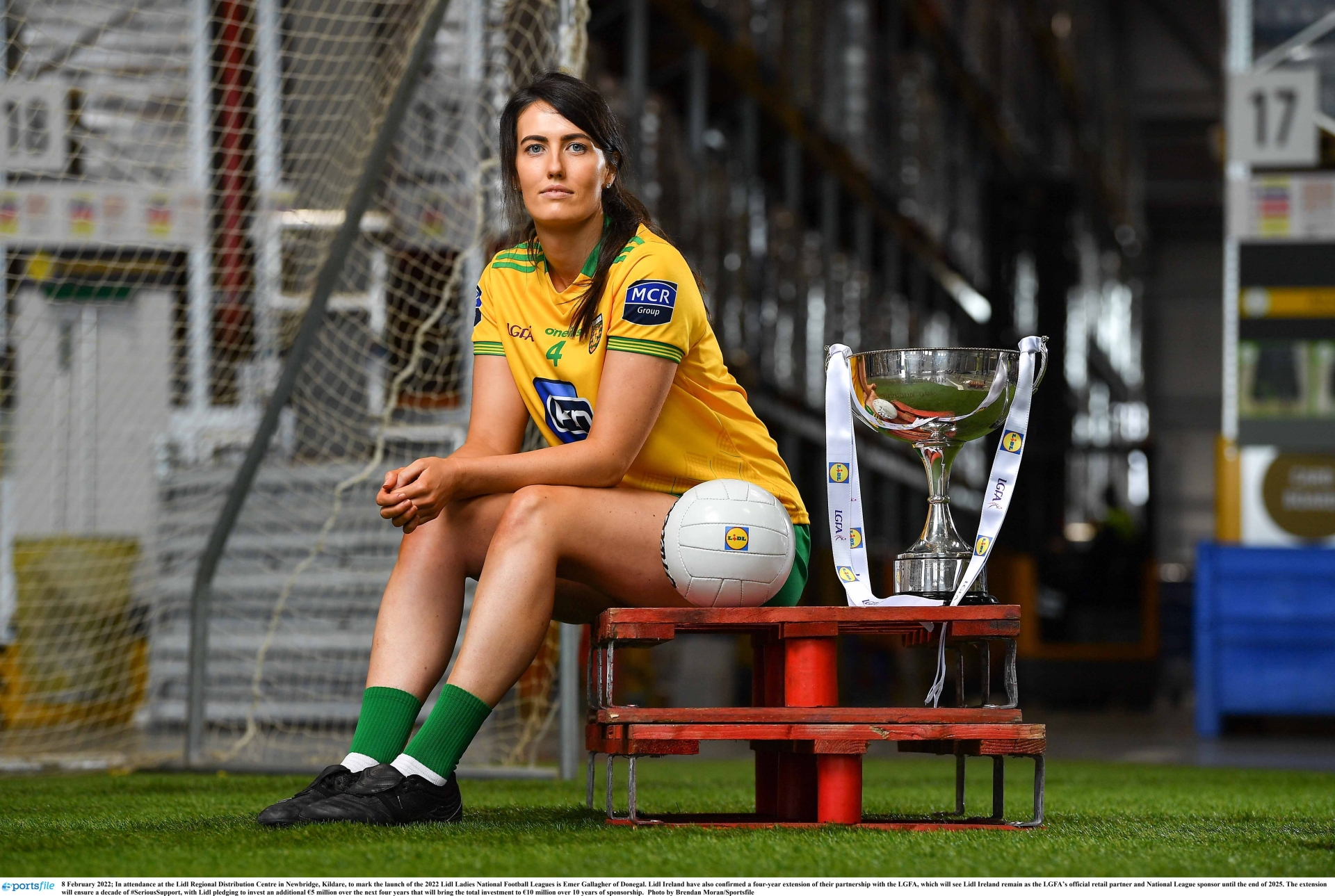 “And that's really the way I wanted it to be, I definitely didn't want there to be a big fuss about me being available, because I felt like I didn't want that to be any sort of disrespect to the girls that were already playing so well in that position. We've had some fantastic additions to our squad this year, and girls that have just been playing out of their skin.

“For Maxi and the boys, the election process for Saturday was one that was always going to be really, really tough. We had five or six players there competing for two or three positions, and it's a fantastic complaint to have.”

Gallagher felt she was going well in training. Maxi Curran, the Donegal manager, had earmarked Gallagher to man-mark Hannah Tyrell.

“I love man-marking jobs,” she says. “I love having that focus.”

Gallagher considered herself ‘very lucky’ to be entrusted with the role in Carrick-on-Shannon.

The mind quickly wandered back to those darkened nights where, with the Donegal squad in full flight, the Termon defender would be pacing the touchline, ticking another box on the road to recovery.

“I remember one time that I found very difficult in particular was whenever I was just actually getting back onto the pitch to do my straight line running by myself,” Gallagher says.

“I was there and I was part of the training, but I was still so separate from it, and it felt like I had such a long way to go until I was actually back involved. I did find that to be very tough, because I felt like it was so close, but yet so far.

“I was almost ticking boxes as I was going along, I felt like I was getting my speed, I was getting my fitness, I was doing all my individual running, and taking the step by step processes of getting back involved in the middle of all the training. I was very lucky that I didn't have the fear there of  re-injury. I was just very much set on getting back in and getting involved and being available to play more so than being available to start.”

It is 13 years ago now since Gallagher lost out to Meath in an All-Ireland Under-16 final in County Longford.

“I remember we didn't get a penalty at the end that we thought we should have got. It's definitely one that we're hurt by. We always felt that we left it behind us on the day.” 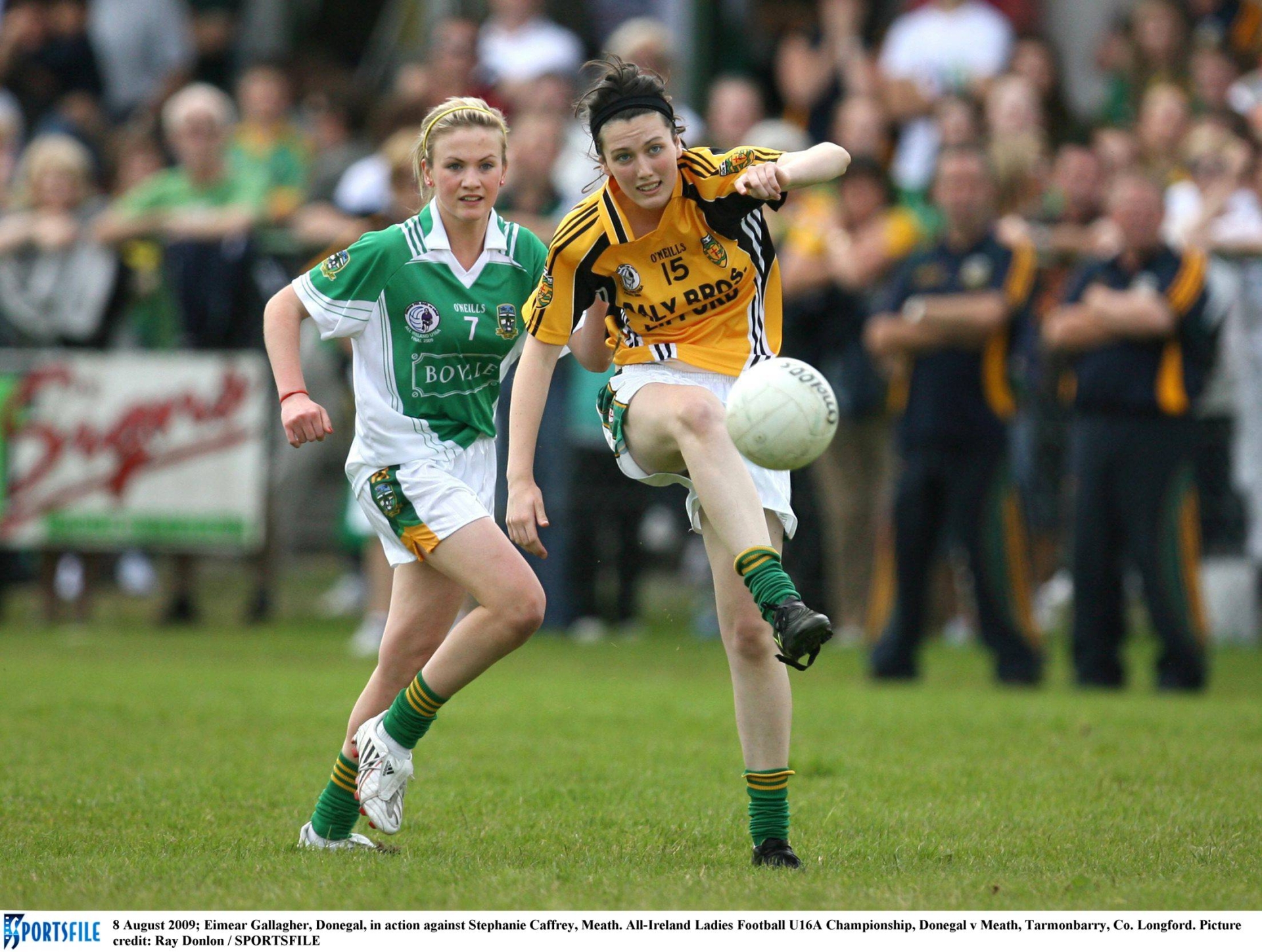 Meath are the reigning All-Ireland champions and Gallagher saw them at close quarters last year whole working as an analyst for TG4. Meath need little introduction as they narrowly defeated Donegal 2-8 to 1-9 in the Division 1 final at Croke Park earlier this year.

Donegal return to Croke Park for Saturday’s All-Ireland semi-finals as the underdogs.

First called into the Donegal squad in 2011 while still in her teenage years, Gallagher was recruited to a side that had just won an All-Ireland Intermediate title.

Now a teacher at Loreto Secondary School in Letterkenny, you wonder what keeps her going at the top level.

“There's a lovely thing involved with being part of a squad. It's a lovely feeling to have that sense of friendship. You're seeing your friends several times a week, and you're going through the good times and the bad times with them.

“There are girls in our team who've had great losses this year, personal losses. I feel like that sense of community and family that we have in the squad has maybe helped them through some of those times. We're so glad to be able to do it. I love the time with my club team Termon; many of the same girls are playing on the county team as well.

“One of the massive things is that all my friends play. We've had a great sense of family in the squad for many years. When everyone is coming back year after year, there's that sense of camaraderie that you want to be there as well.

“There's just a great love for football here in Donegal. We all can definitely say that we have a great sense of pride in our jersey. That's maybe why there has been such hurt and disappointment in the games we've left behind. We have a fantastic base of supporters that travel with us around the country through think and thin. We feel like sometimes when we don't give them the performances that they deserve that we're letting them down. We feel like we owe it to our county, and owe it to ourselves to go out and compete year after year.

“It keeps us young. There's a great sense of silliness associated with training. We know when to be serious, and when to have our fun. Whenever we all do hang up the boots, something we'll really miss is that sense of being with your friends, and having the best days of your life without knowing it.”

When Donegal bowed out of last year’s Championship following a quarter-final defeat to Dublin, few would’ve predicted that they’d be back. Yet, here they are, one hour from an All-Ireland final.

Curran reshaped things over the winter, bringing in 2012 All-Ireland winner Mark McHugh as team trainer. The backroom team was altered and with a few subtle tweaks Donegal put the Dublin ghost to bed on Saturday, a 3-7 to 1-7 win sending shockwaves rippling through the Championship.

In many ways, it was a long time coming.

“It took us a long time to find our feet in the senior championship,” Gallagher says.

“In 2015, when we won our first Ulster, it definitely showed us that we were well able to compete at that level. There is many of the same players there competing. We have a fantastic blend of youth and experience in the team. There are plenty of us at the experienced end for sure. That's really one of the big driving factors.

“Many of us are running out of time. If we don't do it now, maybe there is a sense that there's going to be a rebuilding period in the next few years. That's definitely something that has made us hungrier. You know that every year isn't going to be the same.

“I suppose for some of us we're at the older age bracket of our careers and this is something that we've been working towards for many, many years. So I think that's really the most important thing for all of us, that we don't let it pass us by.”