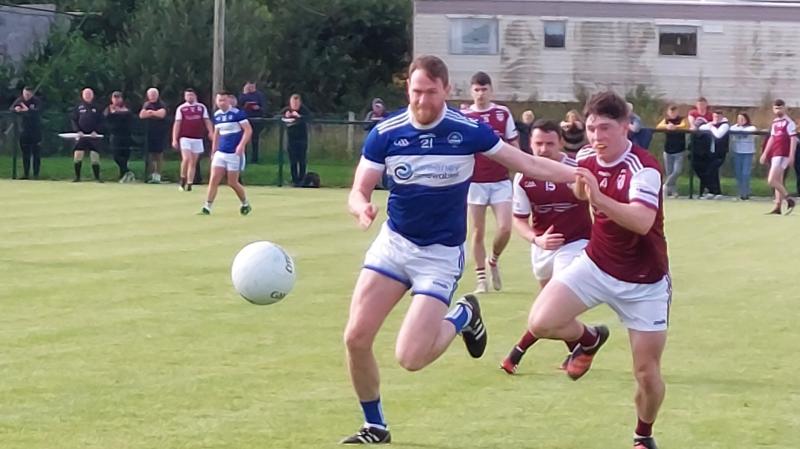 Gaeil Fhánada saw goalkeeper Mark McConigley save a first half penalty before coming from six points down with 10 minutes to play to grab a point against Termon in Portsalon in their Donegal IFC opener.

The visitors were 0-6 to 0-4 at the break having played with the wind and in the second half were picking holes to move into a match-winning position.

However, following a booming ball into the square from Bernard McGettigan, Michael Sweeney won the aerial ball and smashed home a goal to pull his team back to just three down, 1-7 to 0-13.

And although Daire McDaid pushed the Termon advantage out to four, it was the hosts who kicked the last four points of the match to restore parity, with substitute Oisin Shiels and Liam McGrenaghan kicking two apiece.

The first half was played generally at a slow pace with Termon sitting in and pickpocketing Aidan McAteer’s side frequently to get that two-point half-time lead.

After an Anthony Grant point, Patrick McDaid was fouled on 20 minutes, Enda McCormick’s penalty was low to his right and hard, but McConigley made a fine save to keep his team just two down at 0-4 to 0-2.

Two points apiece were traded before the interval, with a super Daire McDaid 45 and accurate Steven McElwaine score for Termon prior to Gaeil Fhánada midfielders Bernard McGettigan and Eoghan Carr’s replies.

With the changing of ends and the wind at their back, Gaeil Fhánada’s intentions were clear right from the moment referee Pat Barrett tossed the ball in the air. Bernard McGettigan punted right at the posts and his ambitious effort bounced over.

Daire McDaid and McGettigan swapped scores but Termon’s play was good, making the most of their upfield excursions and McCormick, McSharry and McElwaine making for a 0-10 to 0-6 advantage on 43 minutes.

Darragh Russell in the Termon goal had to be alert to turn what was probably an attempt at a point by Shaun Kerr around the post, just to make sure.

And even though McGrenaghan pointed a 45, Termon looked in a fantastic position at 0-13 to 0-7 up, thanks to a fluffy with the impressive McElwaine on the mark after scores from McCormick and Ryan McFadden. However, it wasn’t over at that.