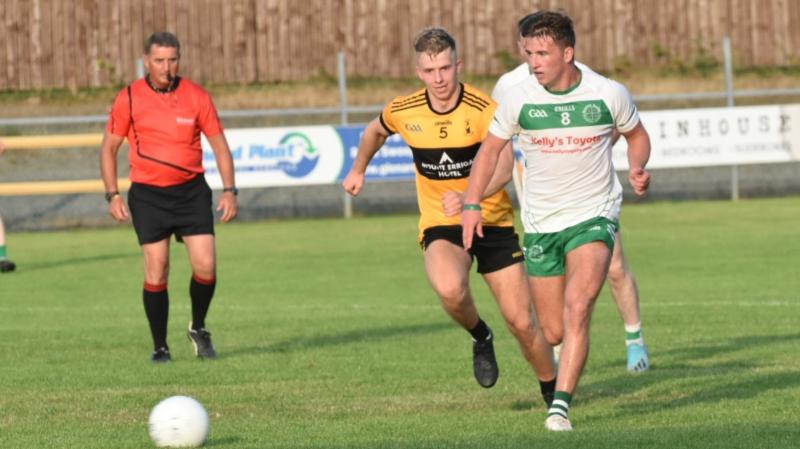 The reigning champions barely hit third gear in the sunshine and played the match completely at their own pace with St Naul’s now facing into a titanic clash with Glenswilly in round two.

St Eunan’s didn’t take long to find their way through the gears with Shane O’Donnell piercing a hole in the visitors’ defence and opting to take his point with less than 20 seconds.

St Eunan’s moved to 0-5 to 0-2 in front with Conor O’Donnell Jnr, a brace from Niall O’Donnell and an Aaron Deeney score, with Peadar Mogan posting St Naul’s first two scores.

Last season in the Donegal SFC quarter-final, St Naul’s, in their first ever appearance at that stage of the premier competition, gave a decent account of themselves in a 2-12 to 2-5 loss with 14 men.

Stephen Griffin was sent off in the first minute that day in Ballybofey with the suspension only served for this season’s championship opener. The absence of Brendan McCole with a back injury was also a blow, although Mogan was back from his J1 sanction in Philadelphia.

One win from 13 was a poor return for the Mountcharles side in Division 2 and with that in mind the draw wasn’t kind to them. Niall O’Donnell kicked two more points for the hosts in the second quarter - the second of which was a peach from just inside the 45 for a 0-7 to 0-4 St Eunan’s lead.

St Naul’s, though, enjoyed a fruitful spell when they worked a fine move which ended with Stuart Johnston putting over and then Michael Coughlan had Shaun Patton backpedalling with a lob which the St Eunan’s goalkeeper tipped over. That took St Naul’s back to 0-7 to 0-4 behind and in with a shout.

Three minutes before half-time, a drilled free-kick from Ian Campbell was drilled and heading off target, only to be claimed by John Rose and but for Conor O’Donnell Snr’s block from his goalbound shot, St Naul’s might’ve been level.

Caolan Ward’s point was the last of the first period and made for a 0-8 to 0-4 St Eunan’s lead. Conor Moore, Kevin Kealy and Niall O’Donnell on the spin pushed the St Eunan’s advantage out to 0-11 to 0-4 in front on 40 minutes and from then on there was a training ground feel.

Fifteen minutes passed without a score with the feel of a training match before Shane O’Donnell buried what proved to be the only goal of the evening, finishing off a move that involved substitutes Sean McVeigh and Ronan McGeehin on 51 minutes.

Mogan with what proved to be St Naul’s first score of the second half - and the away team’s first in 26 minutes - popped over his first of three late ones, with St Eunan’s keeping the scoreboard ticking with Ronan McGeehin, Peter McEniff and Shane O’Donnell points.