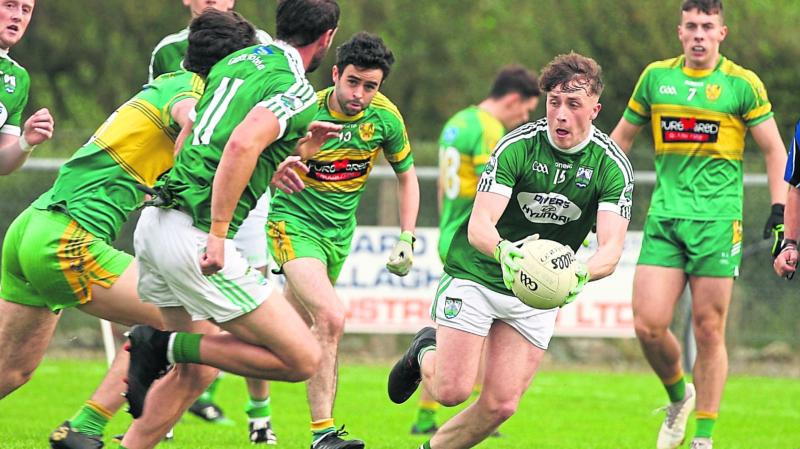 Two goals in four first half minutes from Eamonn Collum gave Gaoth Dobhair the kickstart they needed to get their Donegal SFC off to a winning start against Ardara.

Collum, who is headed for the Dubai to teach on Tuesday, got onto the end of a knock-on from Gavin McBride to stride through and  drove low past Matthew McGlynn on 18 minutes to make the score 1-3 to 0-2 for the home team.

Two minutes later, McGlynn stood firm to get behind a driven Cian Mulligan shot as Gaoth Dobhair went for an instant second, as Trevor Alcorn’s side came to life. Then, on 22 minutes, Collum got in again - again from an assist from McBride who soared to catch Neil McGee’s deliberate lob in - to score a second goal.

That made the score 2-3 to 0-2 and by the break, Cian Mulligan, two McBride frees and a fine Cullum angled point had Gaoth Dobhair in a great position, 2-7 to 0-2 up having kicked 2-6 on the spin.

It was 0-2 to 0-2 by the time of the first water break, with Ardara twice going ahead through Gareth Concarr and  Domhnaill Mac Giolla Bhríde twice levelling for the hosts.

With both teams missing a bagful of players which weakened their hand, Gaoth Dobhair lined out without  the injured Odhrán McFadden Ferry, Niall Friel, Odhrán MacNiallais, Michael Carroll and with Daire Ó Baoill currently travelling, the performance of those who played will be encouraging.

Ardara were missing Paddy Gallagher and Danny Walsh, who are still in Philadelphia, while Stefan Boyle, Jack Brennan, Johnny Sweeney and Johnny McHugh - who all played last year - weren’t in.

Eamon McGee and Michéal Roarty scored points in the second half to move onto a 2-9 to 0-2 lead before Paul Walsh ended a 20-minute scoreless streak for Ardara before adding a free soon afterwards. John Ross Molloy, recently returned from New York, knocked over Ardara’s third point in succession before McGlynn in goal denied Mulligan with a fine save at the other end.

At the three-quarter point, it was 2-9 to 0-5 for Gaoth Dobhair. Collum posted another two decent points, with McBride and substitute Noel Kelly also scoring. Daire Ferry was black-carded late on, with Paul Watters and Joe Melly adding consolation points for the visitors, who face Aodh Ruadh on Saturday.

Gaoth Dobhair - minus Collum - make their way to Glenfin.