The Class of '82: When Four Masters won the Dr Maguire for the first time 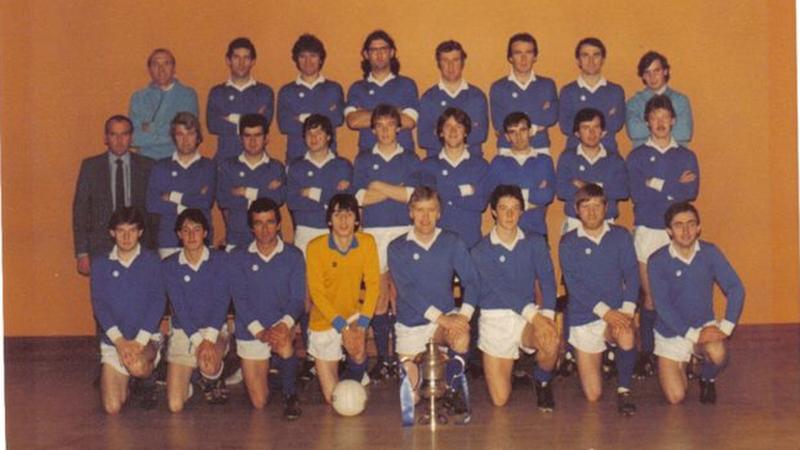 When Tom Conaghan assesses his sporting life in Donegal GAA, he can’t deny that 1982 was the greatest year of them all – one which he looks back on to this day and can’t help but smile.

Ball Dearg Hurling and Football Club was founded in 1905 in Donegal Town, named in reference to the birthplace of O’Donnell Clan and were county champions in 1906. At the time, GAA in the county was, at best, disorganised, and in 1918 Donegal Gaelic Football Club was formed, winning the 1922 Donegal championship in a final that wasn’t contested until 1924.

Eventually, Four Masters came into existence in 1932. The Dr Maguire hadn’t caught a glimpse of the Diamond in 58 years - but Conaghan would change all that. 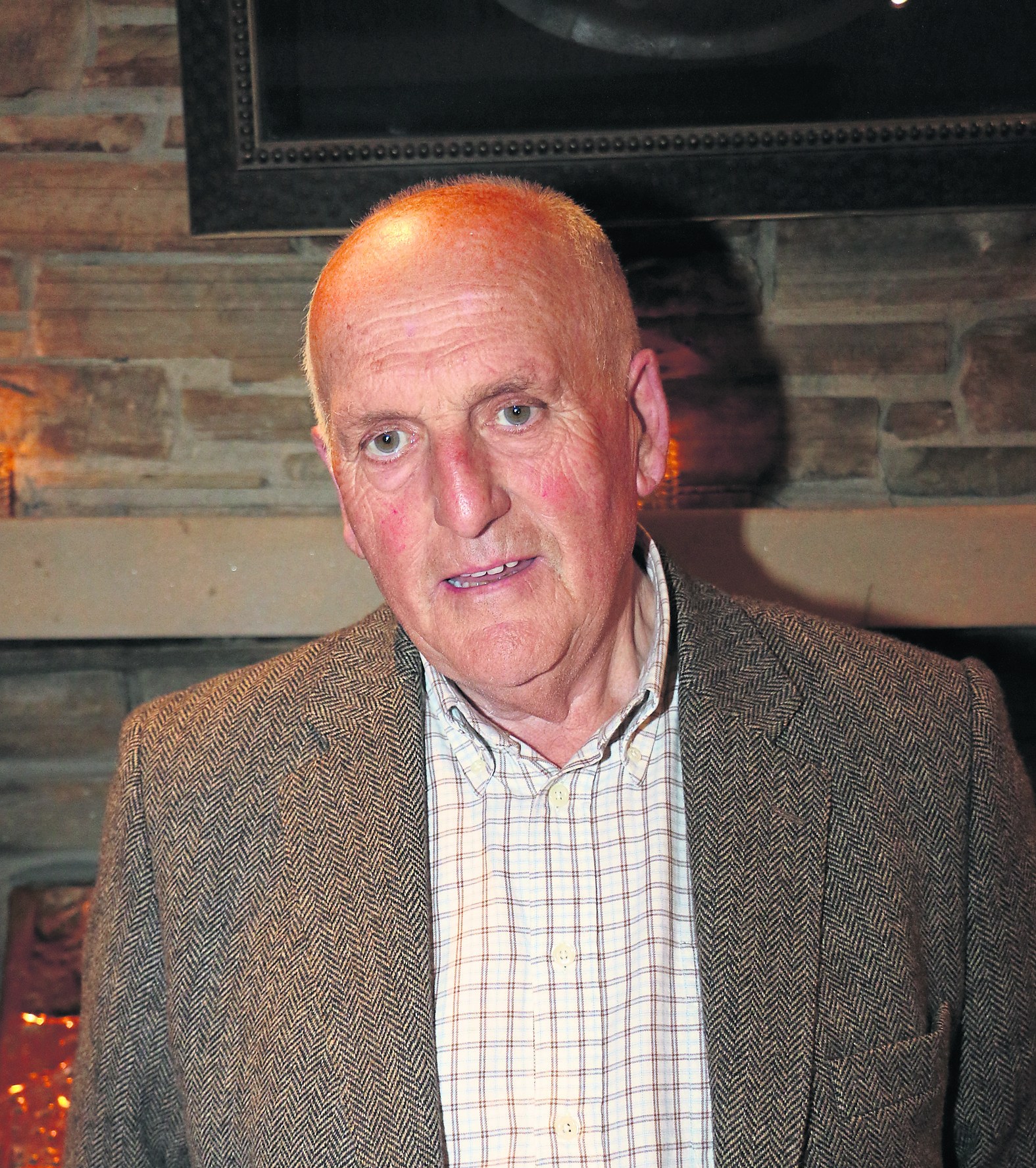 After being appointed manager of the team in 1980, Conaghan made a promise to himself that the traditions and status quos of the past within the senior team were going to change. Less than two years later, the Donegal Town man guided what he referred to as “a special group of young men” to their first county title.

A week later he would be back on the sideline as the county U-21 manager which captured the Ulster title in a hard-fought battle against Derry. Before the year was out, Donegal would be All-Ireland champions for the first time.

The former manager and current independent councillor looks back on that year and how the success came about, stating that he never fully saw himself going into management to begin with.

“I remember speaking to team captain and good friend Donal Monaghan on many occasions about him taking the job as manager, but his whole ambition more than anything was to win a county title as a player. More than anyone, I wanted him to get that medal,” said Conaghan. 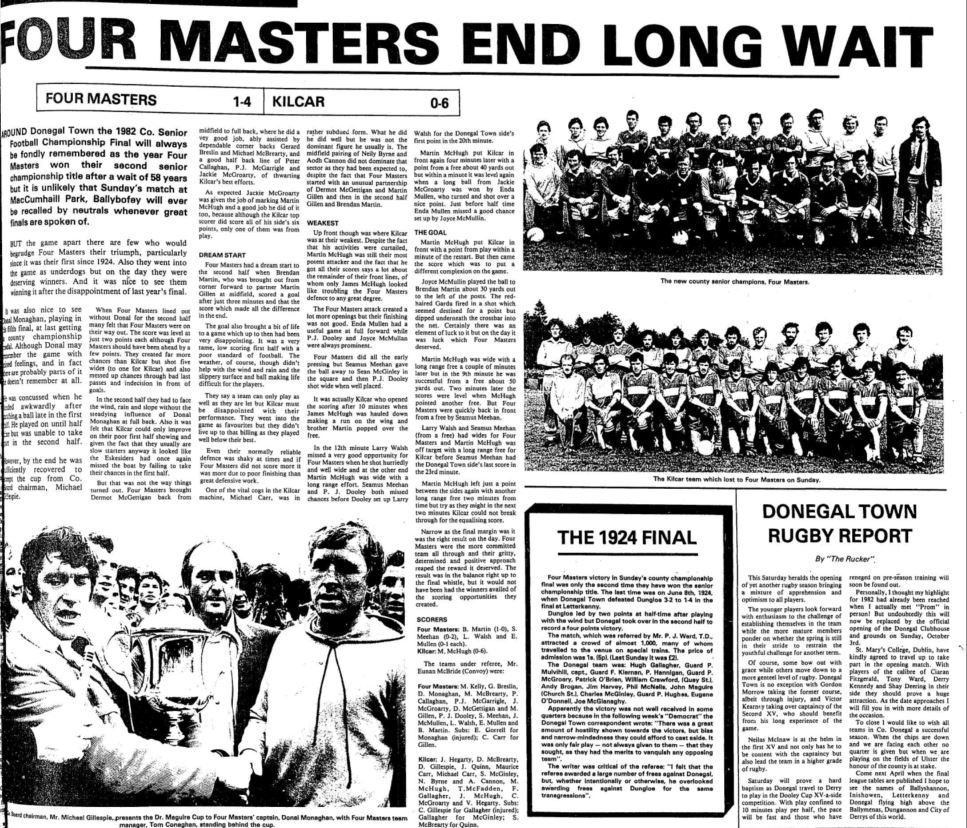 “I agreed to take the job on the conditions that things were going to change in the way players trained and conducted themselves. I knew I had to bring something different to the team. I think without Donal as my sounding board, I would never have been as successful.”

Alongside a large contingent of hard-working and skilful players, Conaghan knew he needed guidance further afield - something he received from eight-time All-Ireland winning manager and Kerry legend Mick O’Dwyer.

“I saw how Micko created a dynasty and moulded a group of young men into the greatest team I’ve ever seen. So, if I was going to get advice about management from anyone, why not get it from the great one? 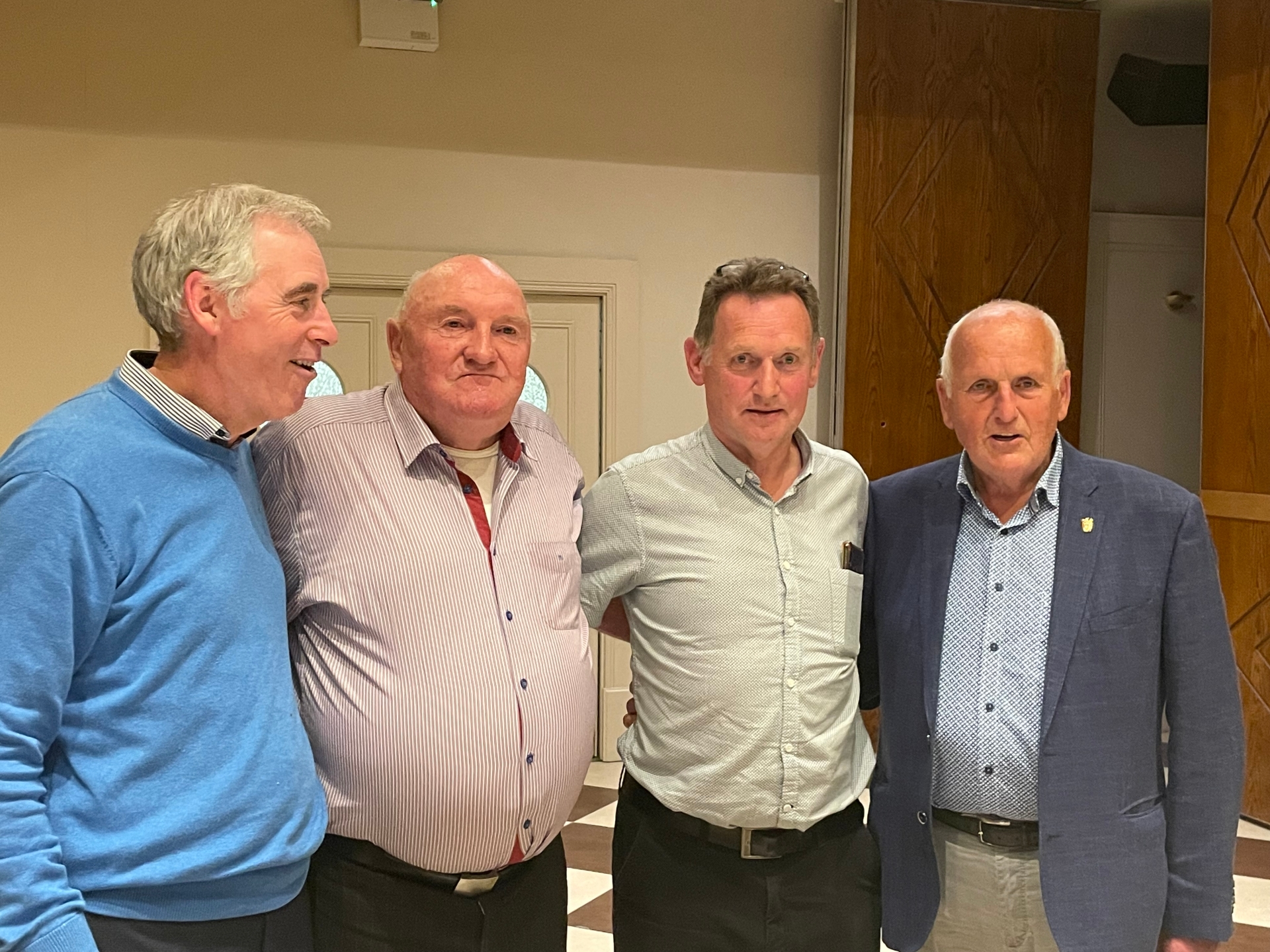 “He always emphasised the importance of training on time, working hard, and the fact the buck stops with me. Keeping control and standards high were key. I felt that in the past, Four Masters always had players good enough to win, but maybe just lacked that bit of discipline and belief. I was trying to give that to the players I had. Thankfully they bought into it,” Conaghan admitted.

Always tagged as the stern disciplinarian during his management days, the then Four Masters boss states it was a mark that never once phased him.

“I always believed I was doing what was best for the team. I never once regretted what I did or felt I overstepped the line. That probably resulted in a few arguments at times with players, but the fact I had the support of Micko, Donal Monaghan and Michael Lafferty who also joined the backroom team, I always knew I was doing something right.

“The person I probably argued with the most about my attitude towards the players was with my wife. She always believed the players were in the right. So, that didn’t always end too well for me,” Conaghan jokes. With a driven attitude and a Golden Generation of club players resulted in two county finals in a row in 1981 and 1982 – with the latter against the 1980 champions Kilcar. 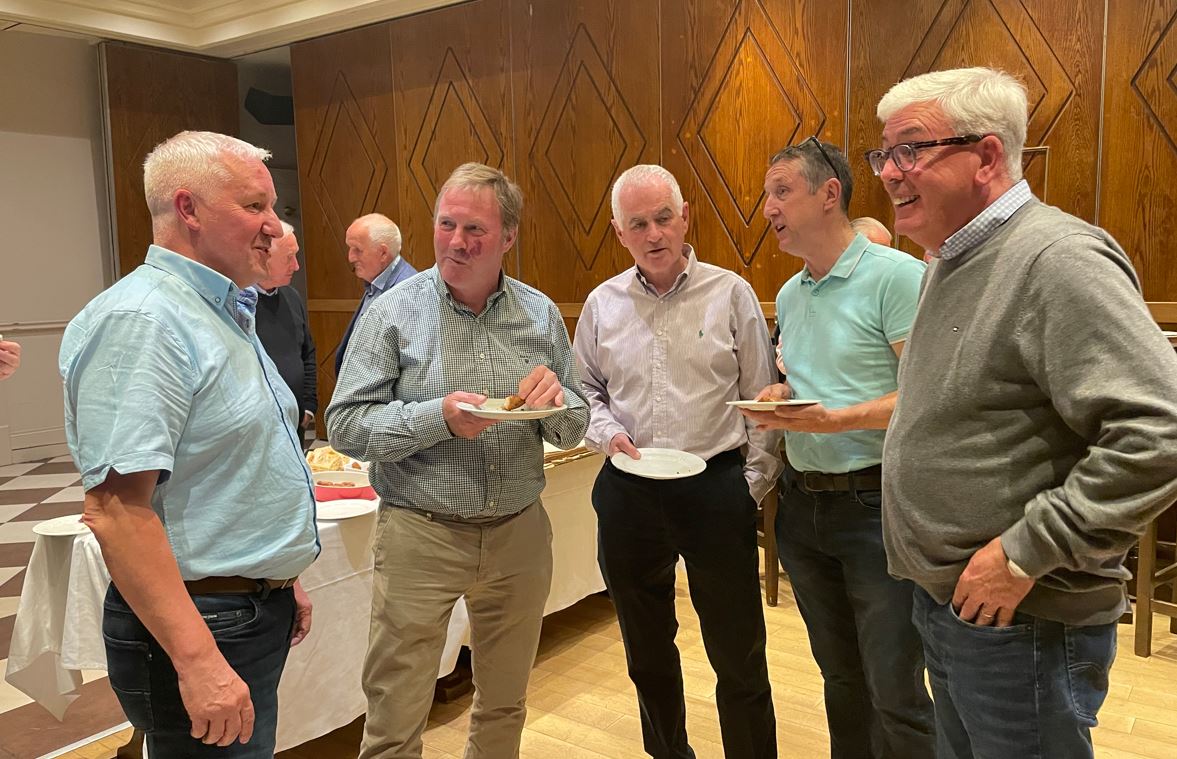 “We learned a lot of lessons after losing to Ardara in the ’81 final. I think the players knew that they may never be here again, so they were going to give it their all. I couldn’t fault one player that day. The most important things were to get our match-ups correct, and I really think Kilcar struggled with us tactically that day.

“The thing that stands out for me the most was the Kilcar supporters had a banner that read ‘A Kerry Joke’ referring to the work that Micko was doing in helping our team. I thought that was a bit disrespectful and I remember using it as a way to motivate the lads.”

And in terms of trying to silence one of Donegal greatest ever players, Martin McHugh, Conaghan had someone in mind.
“I was extremely confident in Jack McGroarty who came back from corner-forward to mark Martin McHugh, who he kept scoreless from play,” Conaghan said. “What an achievement that is. Joyce McMullin was unstoppable, especially in the second half when we really needed leaders to step up. The lads really hit song that day. 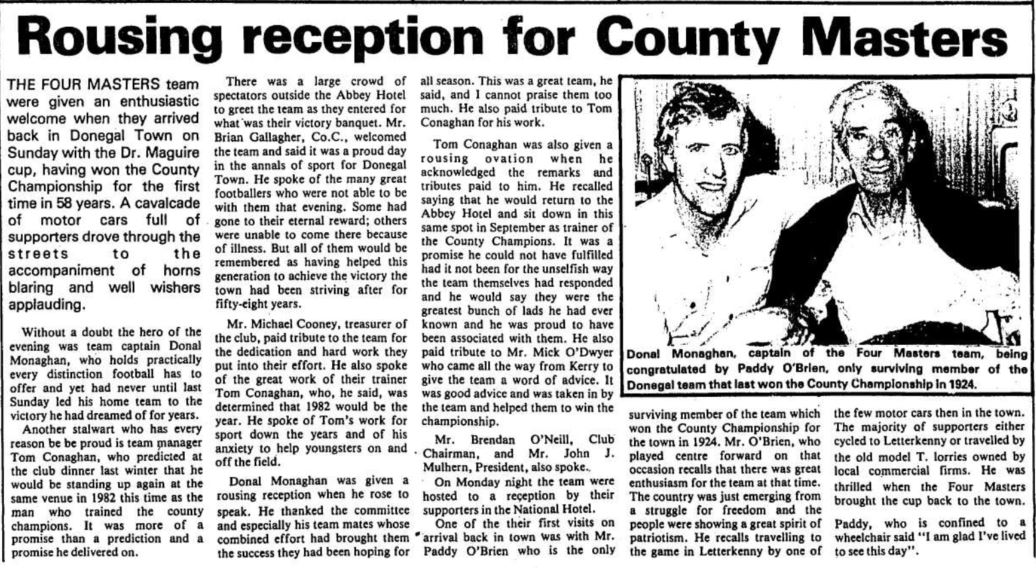 “Donal suffered a brutal head injury at the end of the first half. He was perhaps our best player at the time, but I knew he couldn’t continue. I don’t even think I was too worried about taking Donal off because the bench was so strong. Corny Carr and Eamonn Gorrell came on and they were outstanding. The whole team was just so determined to win that day.

Four Masters would win that day on a scoreline of 1-4 to 0-6 with the only goal of the game coming from the late Brendan Martin with Kilcar failing to score from play.

Post-match interviews credited the special era of young players that came through following their U-21 county championship win in 1979, with particular mention that day going towards Gerry Breslin and Michael McBrearty in corner-back, with the latter taking the kick-outs. Further appreciation went towards then 19-year-old McMullin as well as the serious impact to substitute Eamonn Gorrell who was down to start on the match-day programme.

“The scenes after were just amazing. To see Donal come out to lift the cup as captain was just a special moment. He won so much in his life and now had a county championship to go with it,” said the Four Masters manager. 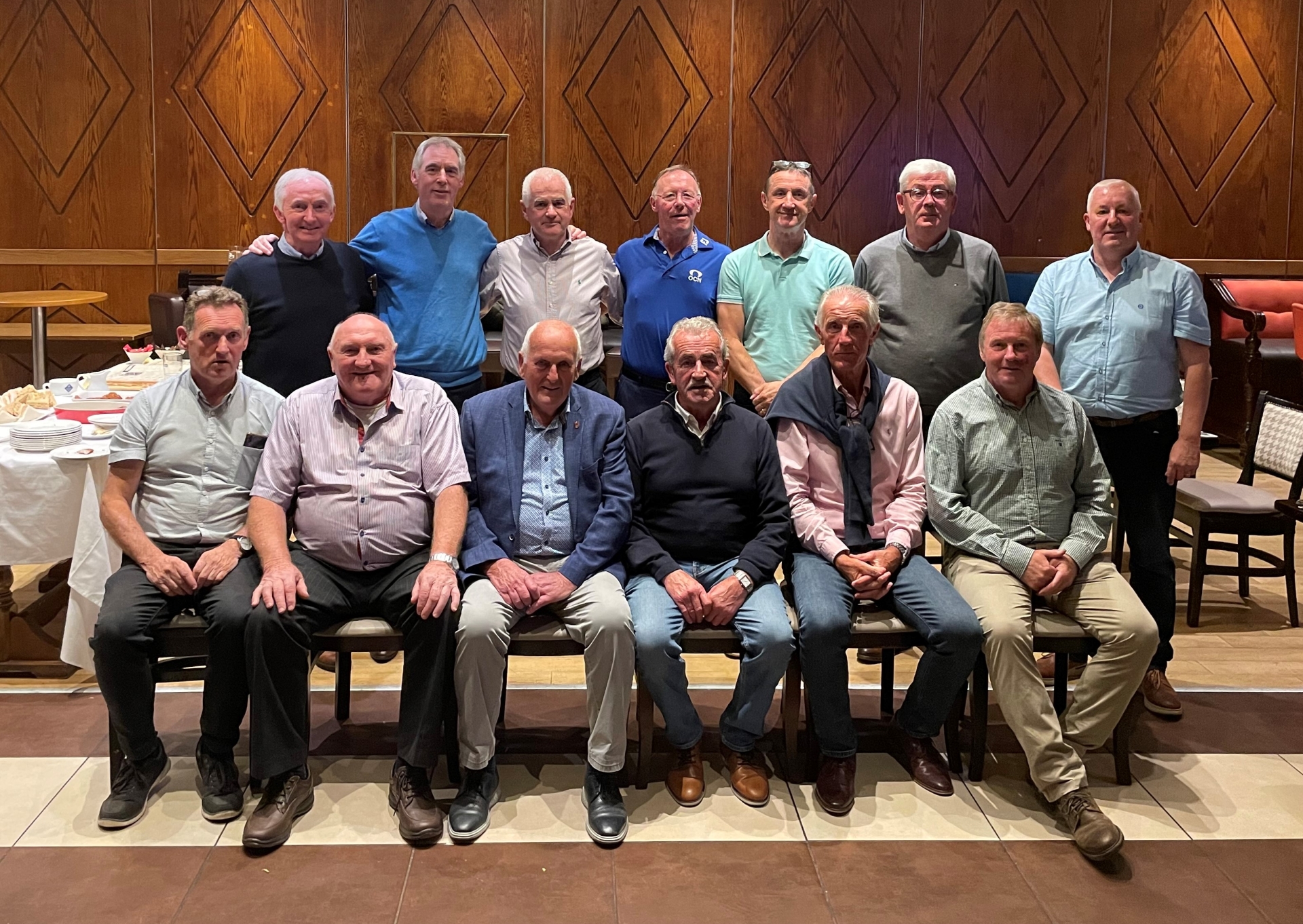 Conaghan would finish that year with the Donegal U-21 team as they captured the Ulster and All-Ireland title, with four players – Michael Kelly, Michael McBrearty, Joyce McMullin, and Seamus Meehan – from the Four Masters team all starting for the U-21s, with the latter three joining fellow Donegal Town teammate Diarmuid McGettigan in claiming the Anglo Celt Cup with Donegal a year later. Michael Kelly would later claim a senior Ulster title as a substitute goalkeeper in 1990.

Conaghan would go on to win another county title in 1984 before being appointed Donegal senior manager between 1986 and 1989, but still looks back at 1982 as his favourite time in GAA.

“I think looking back now 40 years, we can talk about discipline and what I brought to the team, but really, I was just lucky to have such a talented group. I still look back at that team with great fondness. They all did so much for the club that year and I’m not afraid to say that 1982 was one of the most fond moments in my life.”