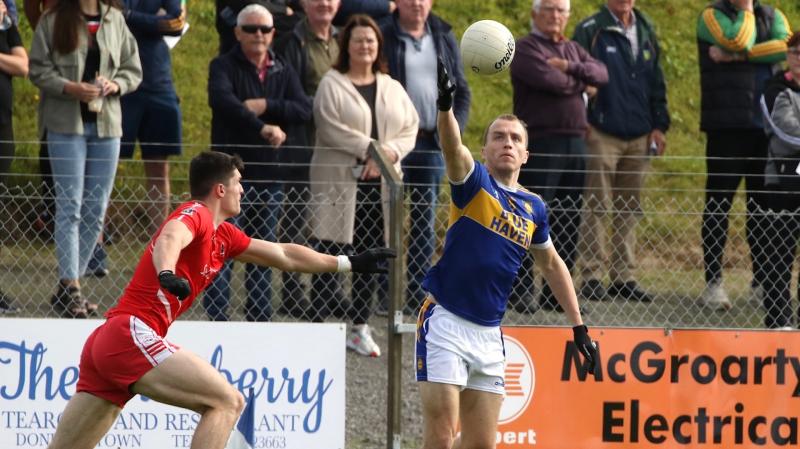 Classy Kilcar had far too much power for a youthful if somewhat wasteful Killybegs side in the Donegal SFC quarter-final at Tir Chonaill Park.

All the usual suspects walked tall for the winners with a most impressive Patrick McBrearty hitting a stunning 0-9 with the towering Ciaran McGinley dominating midfield for long periods and weighing in with three well struck points.

Ryan McHugh hit a sublime and crucial goal after 12 minutes to ease the dominant Towney men into a 1-4 to 0-1 lead and he could have had two more goals.

Killybegs needed a good start if there was to be any chance of an upset - but they seemed a bit shell-shocked in the opening quarter and they did not get on the scoresheet until the 11th minute from a John Ban Gallagher point.

KIlcar were well worth their interval lead of 1-7 to 0-4. The pace dropped considerably in the third quarter as profligate Killybegs hit three wides on the trot.

They were given a glimmer of hope when Hugh McFadden converted a penalty after Ryan Carr's shot for goal was ruled to have been blocked by a foot. McFadden's clinical strike left Kilcar leading by 1-11 to 1-6 with eight minutes to go.

But they failed to build on this impetus and McBrearty and younger brother Stephen McBrearty closed out the match with well struck points. Kilcar settled swiftly with McGinley pointing-after considerable pressure after just three minutes.

Ryan McHugh, who was very prominent throughout, added to that tally with a lovely chipped left footed point in the sixth minute. Patrick McBrearty then had the first of his tally of 0-9 when he took advantage of a poor kick-out to tap the ball over the bar 40 seconds later.

It was all Kilcar with McGinley striking a superb soaring effort from 45 metres. John Ban Gallagher eventually got Killybegs off the mark with a point from an acute angle in the 11th minute. But 60 seconds later we had some sorcery from Ryan McShane and Ryan McHugh as a scintillating one-two ended with McHugh one-on-one with Killybegs keeper Corey Byrne and he coolly stroked to the centre of the net.

Ahead by 1-4 to 0-1, this was a massive score for the winners. And even though the hard- working Hugh McFadden responded with a fisted point for Killybegs McHugh had a golden goal chance when he was through on goal with the ball at his feet-but his soccer style effort was saved by Byrne.

A goal at that stage would really have settled matters but Killybegs did not really profit as they reeled off three wides.

But the game flagged in the third quarter with a paltry three points from McBrearty and Hugh McFadden. Kilcar had another great chance of a goal in the 40th minute when another McHugh run pierced the Fishermen's defence.

McHugh might have netted but passed to the industrious Conor Doherty and the ball crept away from him and the chance was lost. Jack McSharry did land a fine point for Killybegs but they hit three wides on the trot.

And even though they goaled from the penalty spot it was always going to take another goal for them to make any real inroads. And, Kilcar coolly closed out this affair to set up a semi-final slot.