St Michael's felt the wrath of St Eunan's in what developed into a one-sided Donegal SFC quarter-final in Glenties, with joint-manager Raymond McLaughlin admitting Rory Kavanagh's team have a lot going for them 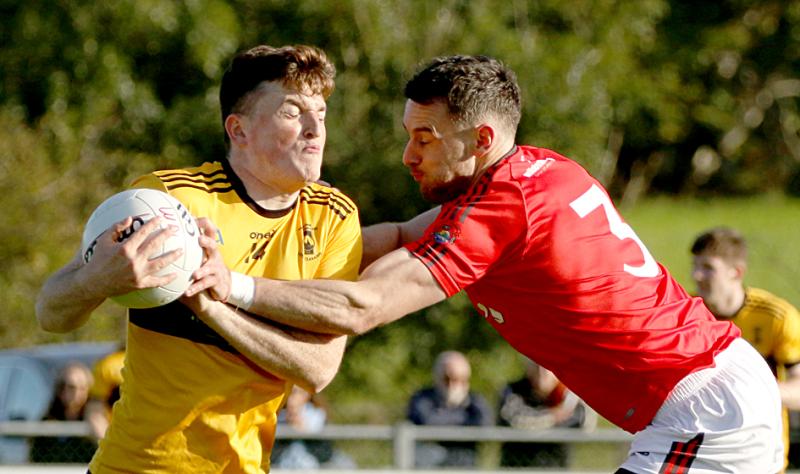 St Michael’s joint-manager Raymond McLaughlin had no excuses as the cars headed for home following his side’s 2-15 to 0-5 loss to St Eunan’s in the Donegal SFC.

Down the years the team based out of Dunfanaghy have given St Eunan’s plenty of cause for concern, although on a sunny Saturday evening in Glenties they had no answer to Rory Kavanagh’s troops, who were comfortable in possession and cutting on the turnover.

“They were sensational,” McLaughlin said. “Absolutely clinical. We tried to contain them for as long as we could to stay in the game but when we got turned over they would go up the other end and score.”

St Michael’s trailed 0-9 to 0-2 at half-time with Niall O’Donnell orchestrating the St Eunan’s tune and had been punished for getting caught on the ball. McLaughlin, who is joint-manager with Cathal Sweeney, said their team tried to push up on St Eunan’s goalkeeper Shaun Patton, only to get by-passed as a result.

“We tried to put a bit of a press on their kick-out and Shaun Patton just picked us apart,” McLaughlin added. “Five out of their nine scores in the first half came from turnovers. We started off OK, we were in the game but we were punished for losing possession up the pitch.

“Last few years, we didn’t press their kick-outs so today we tried to have a go in that respect and still ended up with the same result. They’re so well-drilled, super athletes, and they get around the pitch so well.”

All-in-all, the season is now over for St Michael’s and although disappointed with how it end, McLaughlin hopes the club can build on this when the action gets underway again come spring.

“We’re in a bit of a transition and we were happy enough to have made the quarter-finals,” he said. “There’s a lot of young lads there getting helped on the by older lads. We want to stay competitive and get back to challenging these teams at the top table.”