Off the Post: The Ageless Colm Shovlin of Naomh Ultan

Colm Shovlin was still lining out for Naomh Ultan last year at the age of 61, and this year's he's content enough to watch on as his club face Carndonagh in the Junior A semi-final in Letterkenny on Saturday 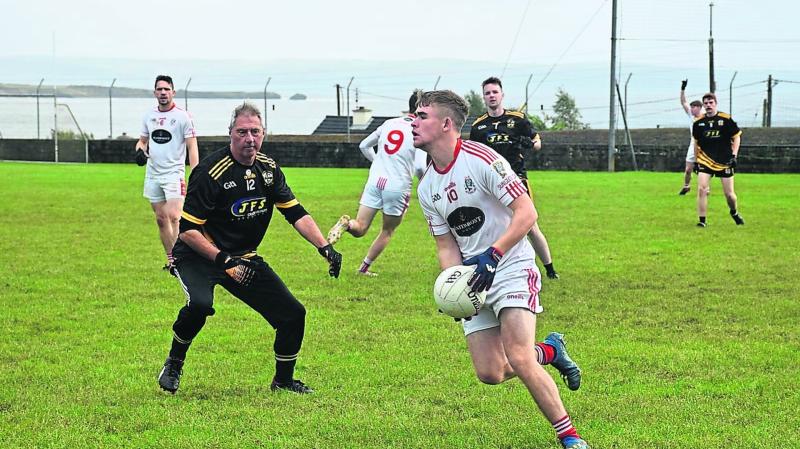 The tiny south Donegal club of Pettigo had a book written about them with the very relevant title of "Up Against It".

Well, down the road the small club of Naomh Ultan have also battled to stay in existence for the past few decades. And it has not been easy as they are sandwiched in-between St Naul's and Killybegs.

Also some local children from Dunklineely and the likes, who went to school in Killybegs tend to play with their school-mates. For many years Terence McGinley fought hard over boundaries in an effort to keep the club going against the odds. But there are few who best embody the spirit of resistance or even subsistence against all the odds than one Colm Shovlin.

His last game for Naomh Ultan was at the ripe old age of 61 when he lined out in the Intermediate Reserve Championship and his brother Martin also played, aged 60. Colm said that the match would not have gone ahead had he and Martin not been available. Liam Kennedy, who is in his 50s, also turned out regularly for the Reserves.

Such dedication is unique and is a credit to all concerned as Naomh Ultan look forward to a Junior A Championship semi-final against Carndonagh on Saturday. But Colm Shovlin has always been a battler and has spoken openly and honestly about his successful battle against addiction.

He has worn virtually all the t-shirts for the Dunkineely-based club and was umpire in a reserve match a few weeks ago.

Shovlin shoots often and most accurately from the hip and always calls it as he sees it and eschews political or self-serving cliches. A few weeks ago, Naomh Ultan defeated Urris at home to book their place in the semi-finals. They looked cohesive, together and very fit and focused. And after years of losing several players, things are finally looking up for Naomh Ultan as they are beginning to get "numbers" even though they have lost Alan Lyons, who was one of their finest performers, to injury.

"For so many years we just did not have the numbers," Colm Shovlin said. “But hopefully that is changing, and you saw it against Urris and that is just so encouraging. The senior team is under new management now and they are playing as a team for that management and that is a good way to be.

"And we also have a few strong players on the Reserve team which is also encouraging".

He has an extra special reason for remembering the last time they won a Donegal JFC title. "The last time we won the JFC was in 2015 when my son Conor Shovlin was captain and he was also captain of the minor team that won all before them in Division Two in 2008. They won four trophies and stayed together for seven years to win the JFC.

"Coincidentally it was Urris who beat us in the Junior county final in 2014. And I can remember John Friel and especially John O'Donnell saying to me after the match that you have to lose one to win one and it came through the next year, and it was great that Conor was captain and he was corner-back.

"He played corner-back and loved the battle. He has had  few injuries but still loves the club with a real passion".

But Conor did not take that passion from the wind, considering his father and uncle lined out last year.

"My last game was last year against Dungloe, in the Intermediate Reserve Championship and I was 61 and my brother Martin played, and he was 60,” Colm Shovlin said.

"There would have been no game if we had not togged out to make up the numbers and that is the only reason we togged out. But we enjoy the game, and we enjoy what we can do for the club. It's a young man's game and there is a huge emphasis on training.

"But we must get rid of this back pass to the keeper and even the soccer people got rid of it in their game - it is ridiculous. And the forward mark is a complete mess.

"A forward can now make a mark after catching a ball on his chest which gives the defender absolutely no chance at all and that is just so wrong on so many levels. "I think the GAA is pandering to other sports and none more so than allowing matches to be decided on penalties.

"We should have one period of extra time and then the next score win - simple as. And I believe that Croke Park is coming down with committees of men and women who have never played the game at all in their lives. There is a huge disconnect between the top and the grassroots".

One Colm Shovlin will never lose touch with his roots - forever in the black and amber of his own Naomh Ultan.