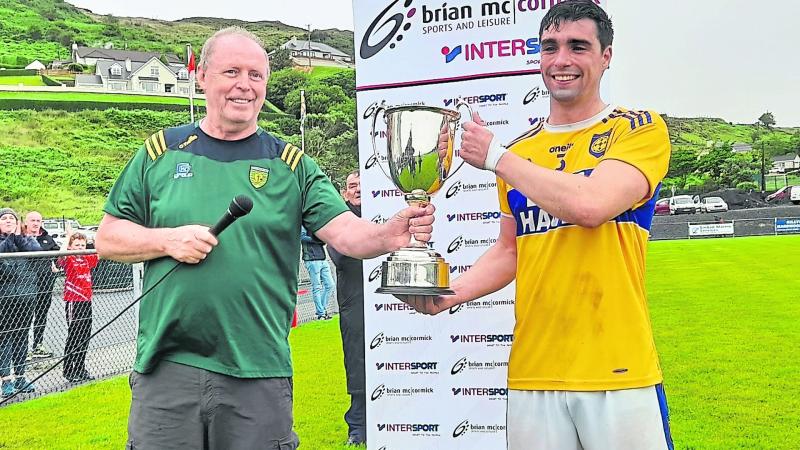 Brian O'Donnell missed out last year for Kilcar when recovering from a cruciate injury but he has roared back in 2022, taking the captain's armband with his side having a Donegal SFC semi-final against St Eunan's on Saturday evening in MacCumhaill Park.

O'Donnell has taken over at full-back with Conor McShane stepping down to the reserves and it has been a big plus for the Kilcar side. The semi-final clash with St Eunan's will be a bit more special for O'Donnell as he missed their meeting last year, which Kilcar won on a 1-14 to 1-12 scoreline.

"I missed out most of last year. I'm enjoying my football now at this stage and I will relish the challenge at the weekend, as will all the boys," said O'Donnell.

He has been to the fore in all of their games and was happy enough to get a comfortable 1-14 to 1-7 win over Killybegs in the quarter-final last weekend.

"We were comfortable for periods,” he added. “But I thought Killybegs fought back well in the second half. But at the end of the day we were happy to be in the next round. That's what we were looking for before the game. You can't ask for much more."

Patrick McBrearty was to the fore in the seven-point win over the Fishermen with 0-9, but O'Donnell feels they will have to provide more help to their main marksman going forward.

"You want your forwards scoring and everyone on the team has a license to shoot when they get in position,” he said. “But when you have a forward like Patrick, you have to give the ball and stand back. When he is going well, he is hard to stop.

"But look, going forward, we have to take some of the load off him, because he can't do everything for us. We have the players there to get scores for us."

The Kilcar captain feels that even though they gave away a penalty on Saturday last, their defence and midfield are working well.

"I thought the penalty was harsh enough,” he said of the award that was scored by Hugh McFadden. “We have worked on our defence over the year, we have worked on our midfield. I think we have the players there anyway and the focus now is getting the job done at the weekend really."

As for the challenge in the semi-final, O'Donnell feels that it doesn't really matter who you meet at this stage, as they will all be difficult.

For both Kilcar and St Eunan's, Saturday night's semi-final will be their biggest test as both sides have not met any of the top sides so far this year.

"With the way the groups worked out, we avoided each other and we avoided Glenties as well, who were the only team we could have got out of the big four,” O’Donnell added.

"It will be interesting to see how both teams react at the weekend, meeting the bigger teams. It's not like we haven't met before. Both teams might tweak a few things. But you never know until the game starts and personally I think it will be a good game of football and will be very competitive."

O'Donnell has no complaints about the short run-in to the semi-final: "We won't complain. We are used to it now and I suppose other teams are in the same boat. We have plenty of work done all year. We are not leaving it to the last minute to prepare for this game.

"St Eunan's have a great bench there and you don't really know what team will start. It's the same for us, we have players on the bench who could come on. You might think what kind of team you are going to face at the weekend but as far as St. Eunan's are concerned, you don't really know because of that strength in depth."

The full-back is very happy with the way things have gone and praised coach Barry O'Hagan, who joined the Kilcar backroom team early in the season.

"Barry came in early on in the year after three or four league games. He just brought an extra dimension to us. I suppose Conor Cunningham did a very good job at the start of the league and got us organised. Then Barry came in, he's an experienced man. That bit of know-how and experience goes a long way.”
ADVERTISEMENT - CONTINUE READING BELOW