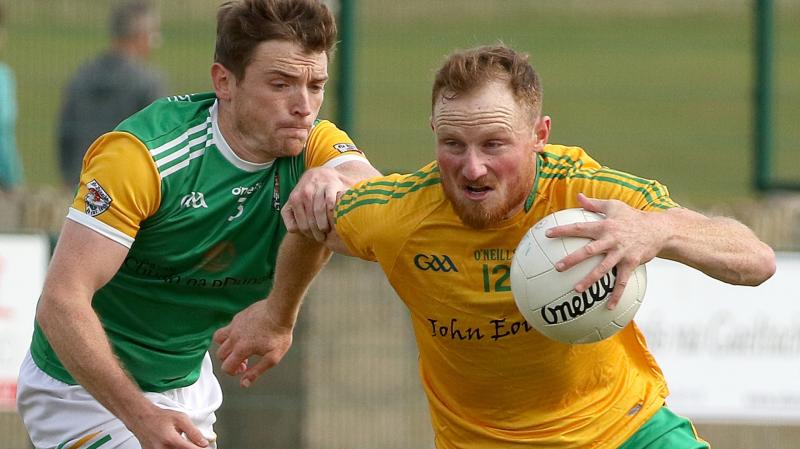 Good things come to those who wait and Kevin McNern has been waiting a long time to get back to a Donegal IFC final.

On Sunday evening at MacCumhaill Park, Ballybofey, he led by example as Naomh Columba overcame a dogged Gaeil Fhánada to get back to the final for the first time since 2011.
McNern was the youngest member of the Naomh Columba panel when they lost out to St Naul's in that decider and he now captains the side from the south-west. They will play Dungloe in the final the weekend after next.

"We have finally got over the line,” he said afterwards. “We have been knocking on the door long enough. We let it slip but thankfully today we got there.”

In his 12th season in the Naomh Columba senior colours, McNern led by example, notching 2-2 of his side's tally in the 4-11 to 2-9 semi-final win.

"We have suffered defeat year after year, after year,” he said. “It is something, you don't try at the start of every year to win the championship, it is something we have been trying for years and years and we just keep getting stopped at the semi-final, quarter-final. Thankfully today we got over the line."

It didn't start that well for Naomh Columba on Sunday evening and it seemed as though those memories of past defeats were to the fore.

"After the last few years, there was going to be a bit of nerves,” McNern added. “But in the second half, once we got rid of those nerves we drove on and stuck to the plan and got the result in the end."

McNern and Co had to deal with a barrage of high balls which Gaeil Fhánada used to great effect, especially in the first half, with Michael Sweeney stationed at the edge of the square.

"They obviously came with that game plan,” McNern added. “Michael is a big man and if you kick enough ball in on top of him, he's going to win some of them. Our defenders, our goalie and midfielders dropped back and I thought they did excellent on him, because he is a big handful in there."

McNern was central to Naomh Columba getting into their rhythm midway through the first half, first scoring their second point and then winning a vital penalty.

"You try to get involved as much as possible and help the team out,” he added. “That's what I was trying to do inside the big square that time I got fouled. Aaron Doherty stuck it in the corner and it probably gave us a lift."

As for the point midway through the half, McNern agreed that it was an important score: "That was probably a big enough score too, to settle the nerves a bit, because it was 4-1 at that stage. I just got inside and kicked it over the bar and we got the next point then to make it 4-3. Not long after that we got the penalty."

While he hit two second half goals, McNern also missed a very good goal opportunity, as did Ryan Gillespie from point blank range, but both efforts yielded points.

"You're through on goal and you pick a spot to put it. It doesn't always go where you want it," laughed McNern. “We stuck to the plan and we got the goals. Goals win games. Fanad, they stuck at it too and they got two goals. Listen, we knew coming here today Fanad weren't going to lie down. They are no pushovers and they are a big physical team. We've played them year after year after year and we know plenty of them.

"There are times when it mightn't look good, but you have to stick to the plan. 4-11 is a good return any day and it will win a lot of games and we are happy with that," said McNern.

Naomh Columba have a break this weekend now before they meet Dungloe in the decider, with Dessie Gallagher’s side from the Rosses having won their semi-final clash last year.

"We were a bit sore after last year,” he said. “We are looking forward to it. We knew at the start of the championship that Dungloe were going to be there or thereabouts and if you want to win the championship you are going to have to beat the best teams in it. We're just happy to get over the line today."