In Quigley's corner: Gary McCullagh on his 'dream come true' 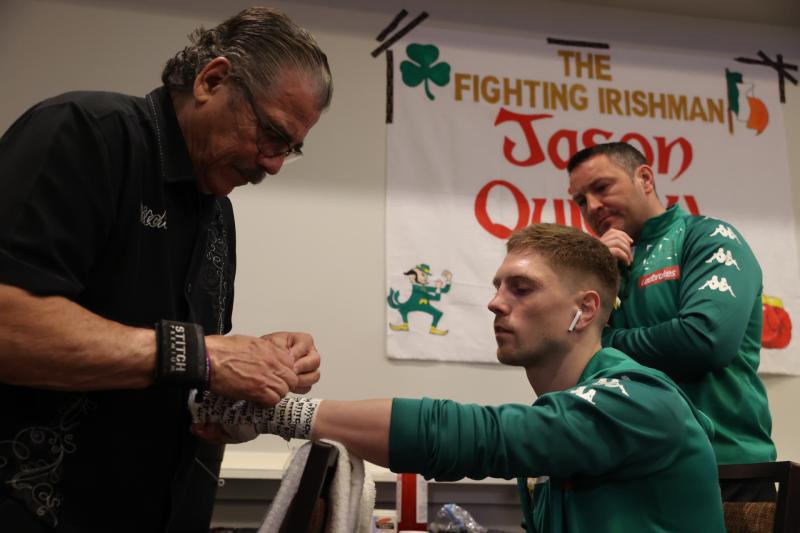 Gary McCullagh looks on as Jason Quigley's hands are wrapped by Stitch Duran.

Raphoe was eerily quiet on St Stephen’s Day when Jason Quigley stepped out of the ring.

Christmas merriment was the order of the day for most, but Quigley’s graft didn’t stop.

“If I get a world title fight, you’ll be with me, McCullagh,” the Ballybofey man told Gary McCullagh as he unrolled the bandages from his hands.

On Friday-week,Quigley (19-1, 14KOs) has his shot at the stars when he faces Demetrius Andrade at the SNHU Arena in Manchester, New Hampshire.

The WBO middleweight title, held by Andrade (30-0, 18KOs), is on the line. In the corner alongside Quigley’s head coach, Andy Lee, will be McCullagh.

“I was honoured to be asked and I just want him to bring the title home now.

“This is a dream come true for me. Just to be even there as part of team is unreal, but for a world title fight is something else.

“How many good boxers form Ireland and UK have never even fought for a world title?” 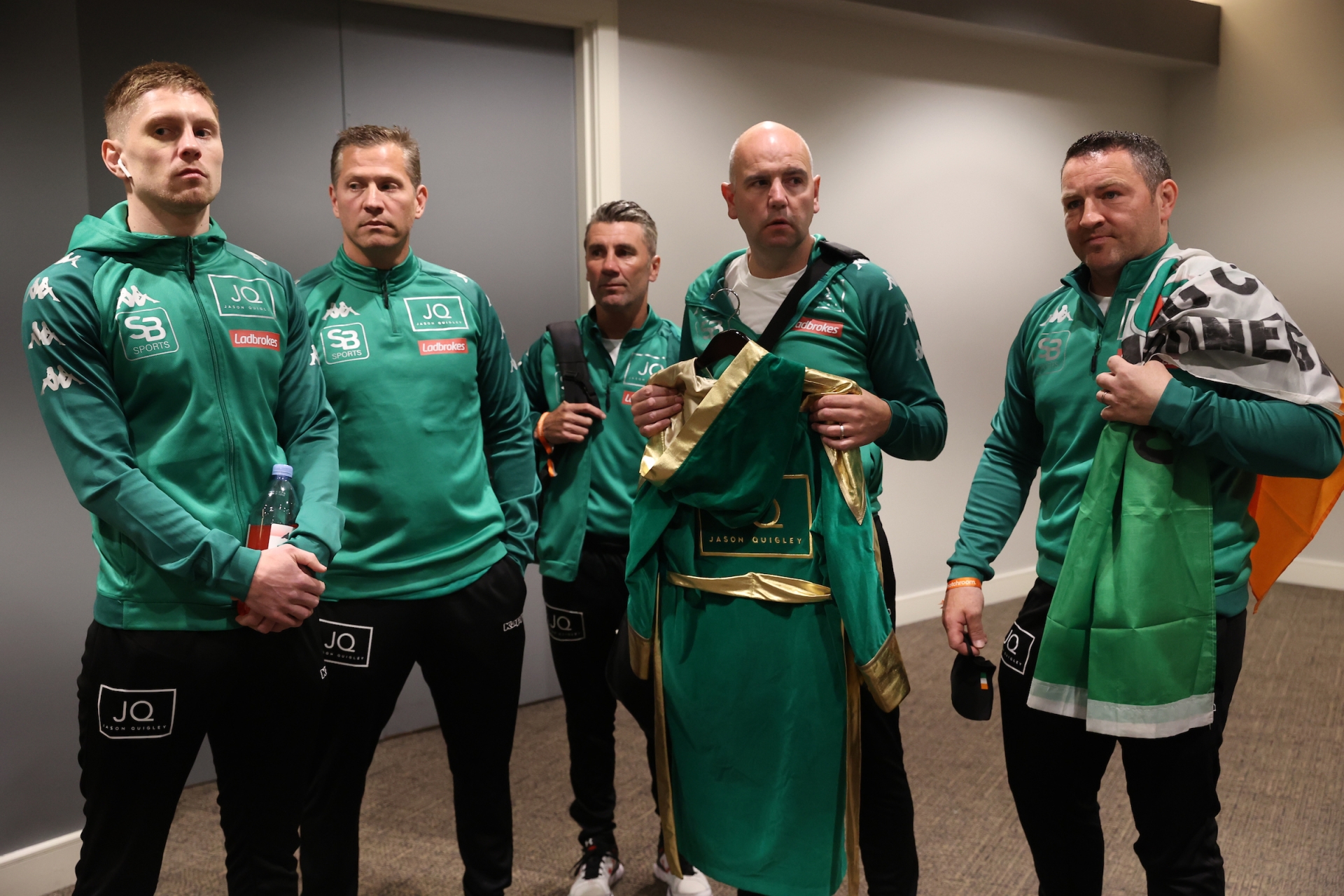 McCullagh knows Quigley better then most.

After breaking his hand on his way to beating Glen Tapia the NABF middleweight title in 2017, Quigley relocated across the Atlantic.

Since that, he’s worked with McCullagh in Raphoe for his boxing training when he’s based at home in Ballybofey.

McCullagh was in the corner for Quigley’s win over Shane Mosley Jr in Las Vegas in May.

“It was unreal to be at the Mosley fight,” he says.

“It was great to be a part of the whole week and see it all happen, from the press conference, the weigh-in, face-off and the fight. To be in the corner was a privilege.

McCullagh was the Ulster senior welterweight champion in 1999, while boxing out of Ring ABC in Derry. He had to give up the sport in 2012 when he got the call that changed his life.

His son Christian needed a kidney transplant and Gary was a match. Gary underwent a six-hour operation in Beaumont with the kidney transported across the city to Temple Street where little Christian spent four hours in theatre.

Just two after learning he was a match to transplant a kidney, Gary took another call. Peter O’Donnell was seeking a new coach - and earmarked McCullagh.

When he took over, Raphoe Boxing Club had just six active boxers. In recent weeks, they’ve had to turn away some new recruits.

In his own days between the ropes McCullagh was a regular opponent to the likes of future pro stars John Duddy and Paul McCloskey and he was enjoyed superb success as a coach, with Leah Gallen returning two European medals and five Irish titles.

McCullagh has seen - and felt - the evolution of Quigley over the years.

“Before now, Jason was moving and hitting with not as much power. He’s more relaxed and settled with his punches since he joined up with Andy.

“I actually thought he fight against Mosley wouldn’t go the distance because of the power Jason had.

“The Mosley fight was Jason’s best fight as a professional. It was only his third fight under Andy. That was a great ten round fight for him and that’ll stand to him.”

Andrade stands as an imposing opponent, but McCullagh believes Quigley’s time has come.

“People still haven’t seen the best of Jason,” he says.

“The Mosley fight was only a glimpse of what he can do. Andrade is unbeaten, but he has never fought an opponent like Jason.

“The bigger the opponent, the better version of Jason we’ll see.”