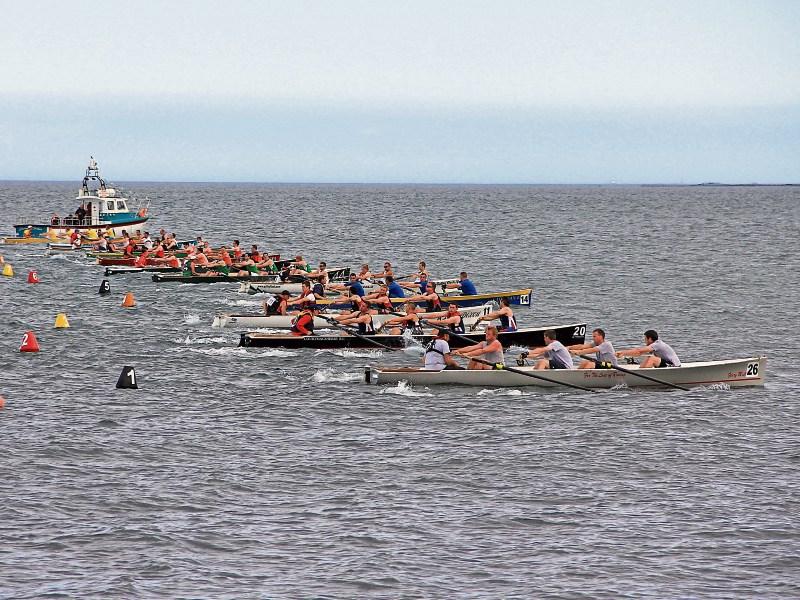 The start of a heat at last year's championships

Thousands of rowers and their supporters are already making their way to south Donegal for the All Ireland Coastal Rowing championships in Ballyshannon this weekend.

The Lakeside Centre in Ballyshannon is hosting the three days of competition and Donegay Bay Rowing Club are the hosts to the 2,700 rowers taking part. There is no admission charge for spectators.

As well as the spectacular racing, there will be plenty of entertainment for all ages not just in Ballyshannon but in Donegal Town as well.

The Events Against Suicide committee along with the rowing club in Donegal Town will host the first Donegal Bay Maritime festival with loads of free attractions for all, and in particular a very family oriented few days will be the overriding theme.

Donegal Bay Waterbus will be operational throughout the festival with street theatre, parade of boats, interfirms regatta, and a host of water events being showcased.

At the competitive end, Donegal rowing club have entered 12 crews across a number of categories for the championship in Ballyshannon. On Friday 12th August, the Heritage races will see 14 Donegal skiffs on the startline for the first time in the competition's history. Michael Curran, Chairperson of the Donegal Coastal Rowing Association, will be on hand to provide master of ceremony duties for this historic race.

Twelve associated Donegal clubs will be represented at the startline: Donegal Bay, Loughros Point, The Village, Inver, Killybegs, Mountcharles, Bruckless, CCF, and Teelin - with two crews from some clubs.

The majority of the races are 1500 metres long and with the start / finish line in front of the enclosure great views will be available to spectators on the shore line. There will also be a live video feed on Sunday finals day, ensuring none of the action will be missed.

Above all, this free event will be a great opportunity to see some of the greatest exponents of coastal rowing displaying their abilities in a beautiful setting at the Lakeside Centre in Ballyshannon - come along and enjoy the spectacle.

Donegal Bay Rowing Club would like to express its sincere gratitude to the local business both big and small who have supported them in taking this massive event to Donegal.

Racing commences on Friday at 2.30pm and continues 8am-6pm on Saturday and 9am-6pmon Sunday.