‘Big in Japan’? - Donegal singer Paul is big in Tasmania 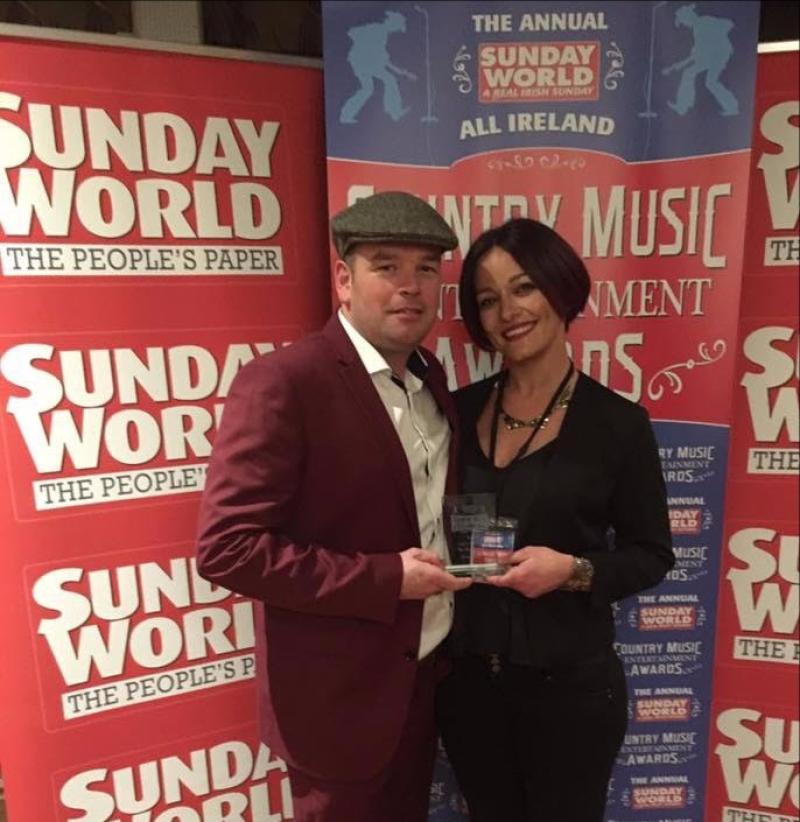 Paul receiving his award from Linda Swarbrigg at the awards ceremony on January 29th.

Pettigo singer Paul Kelly is well and truly breaking into the regular dancing scene with his brand new single 'On The Market' proving hugely popular online. Such is the popularity of the single it has attracted interest in far flung places - most notably Tasmania.

After recently winning “Video of the Year” at the The Sunday World Country Music Awards Show, Paul is really happy with the success of his song.

Paul recently conducted an interview with a radio station in Tasmania which was prompted by the online popularity of his latest song.

He has discovered the song is a really big hit in Tasmania and gets a lot of requests on a locally based radio station’s country channel.

Paul admits he has been crazy about music all his life and grew up playing his mother's guitar. The country crooner has been performing since he was a child, revealing "my own first real memory of performing was when I was about nine and I was asked to join a local talent competition, I enjoyed every second of being on stage and it made it even better when I won."

Paul explains that his mother played a big part in kicking off his musical career. "When I was twelve I started playing in a two piece band with my mother a few nights a week. It was brilliant. When my friends were working hard at weekends or summer jobs I was doing what I loved and getting paid for it," he explained.

"In my late teens the opportunity arose for me to join a 5-piece band and I jumped at it. I was a 'jack of all trades' as I played keyboard, accordion and I also sang backing vocals."

He also admits that country music had always played a big part in his life.

"Although I played all kinds of music, country music has always had a special place in my heart. So I was very excited when my neighbour, Andy Cox, told me he had written a few country songs and would be interested in working on them with me. The very first song that came to be was ‘So In Love’.  It became a major hit straight away and got lots of airplay."

What came next was a very successful country album, on which he got to work with some fantastic musicians.

"It was a great experience being in the studio with Jonathan Owens of Spout Studios, and one of the highlights was recording a duet with the American singer Georgette Jones."

Now, Paul is the frontman in his own six piece band and he's filling dance floors around the country.

With over ½ million views online his music video for his latest single is the hot topic amongst the country community, as he puts his farm 'On The Market' and sells all. In this catchy self-penned tune, Paul sings about the stresses of farming life and his hope of selling up and retiring.

“This song has brought me from strength to strength and has got a great interest from the farming community and also is very popular with the younger folk.”

Again this is a Country Music Show with a lot of emphasis on farming and the farming community. With only three series shown so far it’s proven very popular right along the Country Music seen.