Muiris of Upper Cotteen, Derrybeg has spent a total of 29 years with the service, 18 years as a firefighter and 11 as station officer. 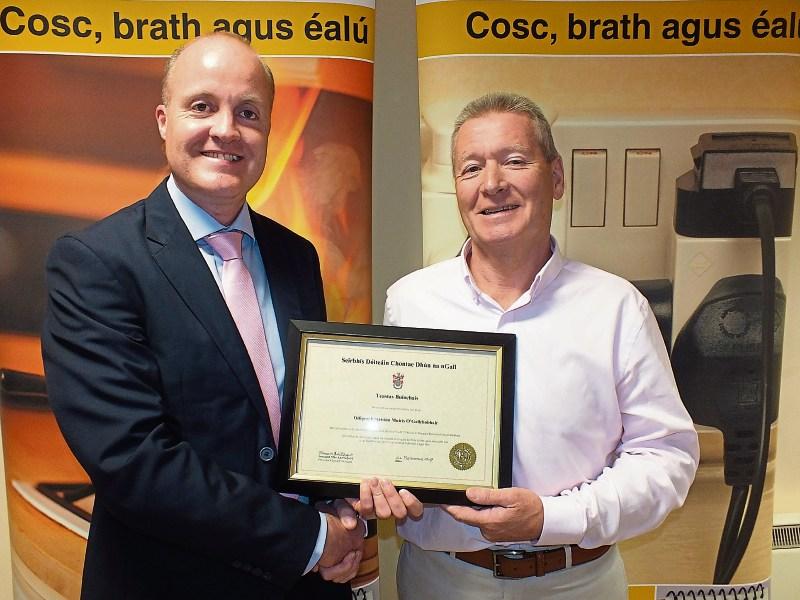 Muiris Ó Gallachóir has retired from his position as station officer at the Gaoth Dobhair Fire Station after nearly 30 years of service.

Muiris Ó Gallachóir has retired from his position as station officer at the Gaoth Dobhair Fire Station after nearly 30 years of service.

Muiris of Upper Cotteen, Derrybeg has spent a total of 29 years with the service, 18 years as a firefighter and 11 as station officer.

A presentation function was held in his honour at the Fire Station on the Gaoth Dobhair Business Park on Saturday evening, and afterwards Muiris joined his family and work colleagues and their partners for a celebration in Teach Sheáin Óig, Middletown, Derrybeg.

At last, Muiris can now put away the page he's worn every hour of the day and every day of the year during his time in the service, when he was ready to drop everything to answer an emergency call.

His colleagues paid tribute to him as he bid goodbye to the station for the last time and although he is gone from the service, he leaves knowing he has passed all of his training and experience onto a new generation of firefighters who will be just as dedicated as he was in carrying out his duties.

The night was tinged with sadness at the loss of a valued colleague. It was also an emotional night for Muiris and his wife, Kathleen, and their daughters, Sarah and Emma, and son Conor, as they witnessed the esteem in which he is held.

Muiris has seen a lot of changes over the 29 years, from a new station, new fire appliances, new equipment and new techniques and at all times he has taken this in his stride and has adapted with the changing times. He has thanked all his family for putting up with him over the years, from waking them up in the middle of the night with the noisy alerter, to running out the door leaving a hot dinner on the table, and sometimes in church during a Mass or a funeral.

He will spend his time out of the fire service with his family, sharing special times with his children, and is looking forward to his retirement days.

The new station officer to replace him is Eoin Mac Giolla Easpaig of Stranacorcra, Derrybeg, while the new sub officer is Noel Rua McBride. The people of Gaoth Dobhair wish Muiris a very happy retirement and they thank him for his dedication and his professionalism during his time at the Gaoth Dobhair Fire Station.