A warm Donegal welcome as the Queen Victoria, the biggest ever liner to dock there, arrives in Kilybegs this morning 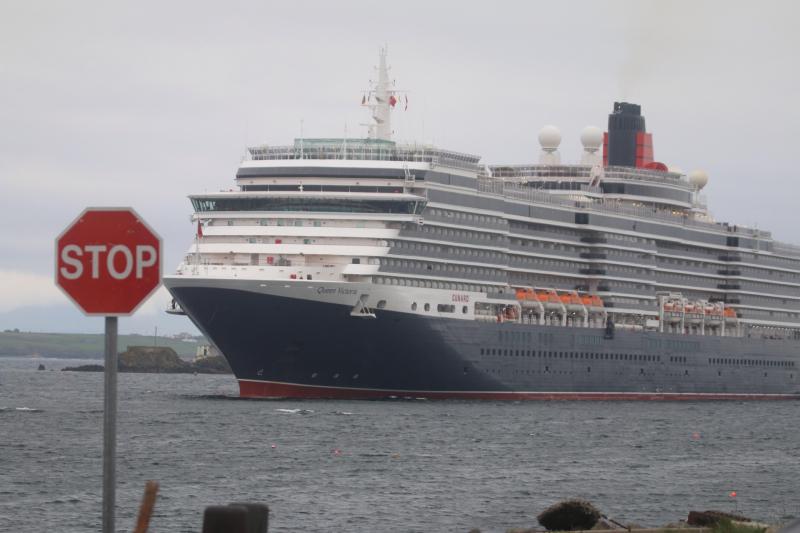 The Cunard liner Queen Victoria has arrived in Killybegs. On a grey morning the magnificent 294 metre passenger liner dominated the skyline as it made its way into the harbour this morning.

It's quiet at the moment (8.30am) in the fishing town but once the liner gets tied up and passengers make their way off the Queen Victoria a host of activities are planned on shore, among them a Victorian Tea Party and visits to local attractions in Donegal, from Sliabh Liag to Donegal Town. The liner, the biggest ever to dock in Killybegs, is captained by Waterford native Captain Tomás Connery. It's understood the liner is being docked as we write by Donegal woman Nuala O'Donnell. Fintown woman Nuala is the third officer on the giant liner and is making her maiden voyage on the vessel.

Queen Victoria and her sister ship Queen Elizabeth are both visiting Killybegs this summer and will be the biggest cruise ships to dock there.
Both ships are 294 metres in length, just six metres shorter than the pier at Killybegs.

Queen Victoria has a capacity of 2,014 passengers. The Queen Elizabeth, which will be in port on July 20th, can carry 2,077 passengers.
The vessels are two of a total of 15 cruise ships due to visit Killybegs during this year’s cruise season.
It is estimated 20,000 passengers will visit Killybegs on cruise ships this summer.
Four cruise liners will visit Killybegs over an eight day period which started earlier this week when the Silver Muse docked and after the visit of Queen Victoria on Sunday, Hanseatic will visit on Monday and Prinsendam will be in the port on Friday.
Guests on board the luxury liner will be enjoying a 13-night tour of the British Isles, visiting some of the most remote and picturesque landscapes in and around the Emerald Isle.

After Killybegs Queen Victoria will then head to Belfast on Monday 21 May before continuing her voyage. At the pier this Sunday morning - Photo Matt Britton

€39 million refurbishment
In 2017 Queen Victoria underwent an extensive €39 million refurbishment, which saw the
addition of an exquisite lido sun deck for sun seekers as well as a stunning Winter Garden,
refreshed and enhanced for guests looking to relax while looking out over some of the best
views at sea. The distinctive Cunard elegance remained with many of the design cues taken
from previous Cunard ships, such as the original Queen Mary and Queen Elizabeth.