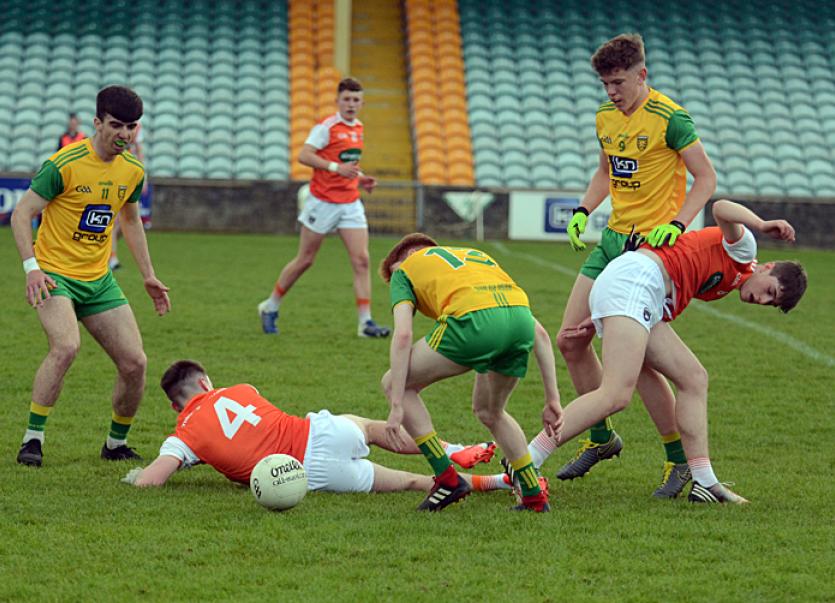 Action from Saturday evening's encounter in Ballybofey where Donegal got the better of Armagh PICTURE: THOMAS GALLAGHER

Johnny McGroddy hit nine points in a man of the match performance and super sub Shane Monaghan struck two goals in what was a cracking game of football.

Donegal got off to a lively start and led 0-5 to 0-1 after ten minutes with Johnny McGroddy leading the scoring charge with three points.

Carlos O’Reilly and Senan Rooney added the other two points with O’Reilly’s strike a chance at a goal.

Eric Carr and Daithi Roberts added points to extend the Donegal lead out to four points by the 20 minute mark as Donegal led 0-7 to 0-3.

Armagh were looking very ordinary at this stage in the tie and playing with the wind they were lacking ideas in attack.

But amazingly Donegal did not score again until three minutes into injury time - Paul O’Hare, just on for Senan Rooney, brought the Donegal total to 0-8.

It was all Armagh in the closing ten minutes of the half. They sprang to life after Mark McKeever had the only goal of the half when he got on the end of a long delivery from wing-back Redmond French.

That was on 24 minutes and with Donegal rocked, Callaghan, Reavey and Oisin King all raised white flags to open up a two point lead by the half hour mark.

O’Hare, who replaced the injured Rooney, made it a one-point game on the stroke of half-time to leave the score Armagh 1-6, Donegal 0-8 at half-time.

McGroddy had the scoreboard clicking once more within 13 seconds of the restart as Donegal  tied up the game.

But Donegal were reeling four minutes later when Rory Kearney - who had a fine game following Ciaran Moore - polished off a good Armagh move to hit the roof of the Donegal net from 14 metres.

Armagh were ahead once more, 2-6 to 0-9 and when McKeever quickly added a point Armagh were four in front.

Donegal to their credit did not panic and with McGroddy chipping in with three more points and Eric Carr also landing a fine score, Donegal had the margin back to one by the 40th minute. And with Callaghan and McGroddy trading points, the margin was still one at the three quarter mark.

Armagh went three up again in the early minutes of the fourth quarter but a super Donegal goal from Monaghan with his first touch after coming on tied  up the game with ten minutes remaining.

And while Armagh went ahead again through Reavey, Donegal were simply not going to give up and thanks to late points from man of the match McGroddy and a second goal from Monahan sealed the win.

Donegal now face Cavan in the quarter-final next weekend.

Armagh finished what was not a dirty game with 12 players after the second half sendings off of Lee Rice, Rory Kearney and Mark McKeever.