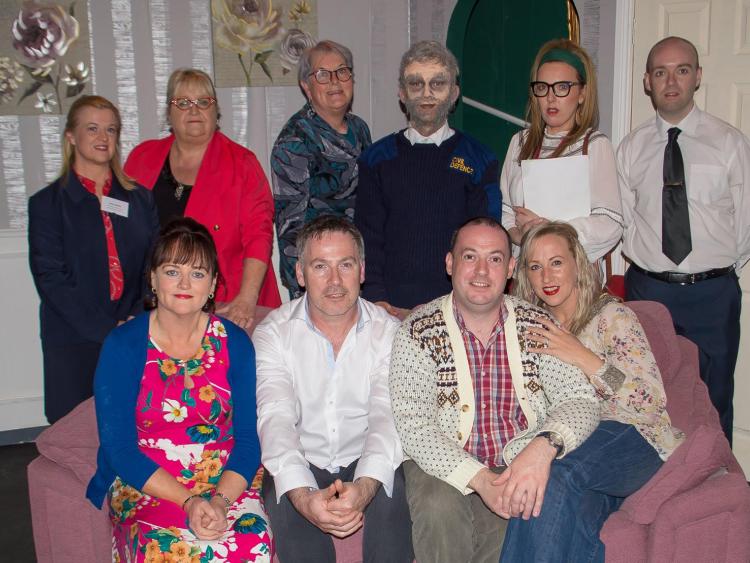 The cast of the comedy, Cash on Delivery,

Comedy fans are guaranteed fun-filled nights of side-splitting laughter as the classic farce, Cash on Delivery arrives at the Termon Complex Pettigo on Friday and Saturday next, November 8 and 9.

Presented by Borderline Players, the farce written by one of the true comedy masters, Michael Cooney, follows the hapless tale of Eric Swann who since being made redundant from his job at the Electricity Board has concocted a web of lies to defraud the DSS and maintain his comfortable lifestyle.

But as his tales start to spiral with the arrival of a departmental fraud inspector, Eric is forced to drag his lodger, wife, uncle and other unwitting house guests into his devious plot.

Directed once again by Siobhan O’Brien, this will be the second time the group has brought a production of Cash on Delivery to the stage.

Discussing the comedy’s original run in 2012 Siobhan admits that it was a hard play to shake off.

"The reaction of the audience to Cash on Delivery was overwhelming and every year people have been asking us when it was coming back," admits Siobhan so the group felt that now was the right time to revisit it. Many of the cast members from the 2012 run of the comedy production have returned for the 2019 version. This includes Borderline regulars, Paddy Duggan, Frances McGloin, Teresa McLoughlin, Joe Walsh, Eleanor Gallagher and Donal Monaghan. They are joined by Liz Smith as Brenda Dickson, Dominic Sharp as Uncle George and Aideen Casey as DSS Inspector Gina Jenkins.

As well as directing the comedy Siobhan is also returning to the stage in the role of Ms Cowper, a no-nonsense superior DSS Official who is out to rumble Eric’s scheming.

Booking for Cash On Delivery which will take to the stage nightly at 8.30pm is now open at the Termon Complex by contacting the Box Office on (071) 98 61111 or online at www.termoncomplex.com

€1.7m boost for for housing adaptation grants for older people and people with a disability in Donegal

€1.7m fund to improve the homes of Donegal

Litter of pups and their mother stolen in Laois

Get your INISH TIMES for all the news