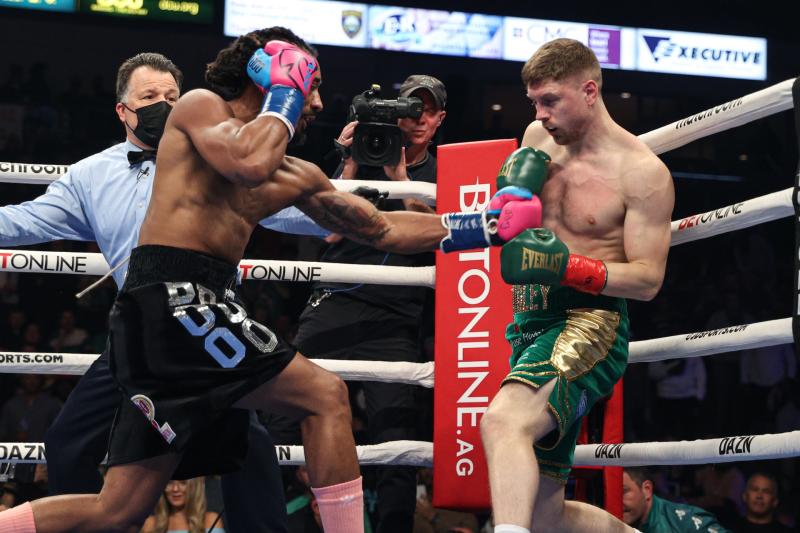 Andrade stopped Quigley in the second round at the SNHU Arena in Manchester, New Hampshire.

Quigley was on the canvas in the first round and twice in the second.

With mere seconds remaining in the second round, Arthur Mercante Jr stepped in and called a halt.

In the last minute of the first stanza, Quigley was wobbled by a huge southpaw right by Andrade.

Seconds later, Quigley was on the deck, but the Ballybofey man saw out the round.

With mere seconds remaining in round two, the dream was dashed.

Andrade, keen to make good his pre-fight promise of a statement, put Quigley to a knee before a flurry prompted the stoppage. Andrade had jumped on the ropes to prematurely

A breathtaking roar greeted Quigley as he made his way to the ring to the drones of What’s Left Of The Flag by Flogging Molly.

Quigley was roared on by a vociferous crowd at his weigh in, but the din here was like that never experienced by the Ballybofey man.

A unanimous decision win over Shane Mosley Jr in May saw Quigley deliver a career-best performance - and call for a clash with Andrade.

The Rhode Island southpaw was making his fifth defence of a belt he first won three years ago against Walter Kautondokwa.

Andrade defended the belt against Dubliner Luke Keeler - a former amateur opponent of Quigley - in January 2020.

The 2007 world championship gold medalist has been calling for a big bout having been avoided by many in the division.

Now, those big days will call.

For Quigley, it’s a case of beaten but not broken.