Is a West Donegal beach home to a noble false widow spider?

It is very similar to the terrifying black widow spider 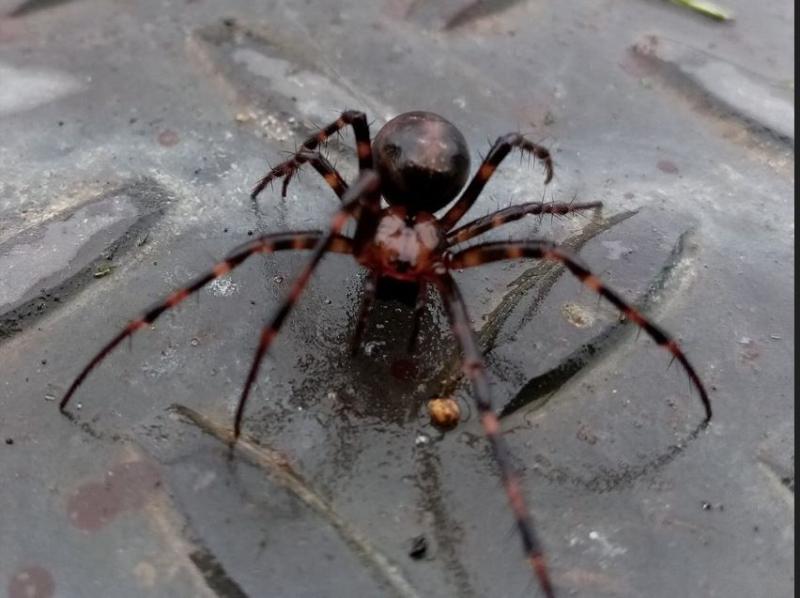 The spider discovered on the beach at Narin on Saturday

Beachcombers beware, if you happen to be out enjoying one of Donegal's many fine seashores you might stumble across a little creature you might want to avoid!

One keen observer has unearthed what he thought was a noble false widow (steatoda nobilis) today on Narin beach in West Donegal.

It is very similar to the terrifying black widow spider - an invasive species of spider which is spreading throughout Ireland is much more venomous than was first assumed.

The false widow spider was first discovered in Ireland in 1999. It is understood to have originated in Madeira and the Canary Islands first entered Ireland through fruit or exotic plants destined for garden centres. Though their origins are uncertain, it is certain they are here to stay.

The noble false widow has been reproducing at a significant rate, prompting questions as to how it might affect native spider species and humans.

Unlike some other spider species, it is active all year round, has a five-year lifespan and produces 1,000 babies annually.

There will be a significant population of false widow spiders in every county in Ireland within the next two decades, according to new research.

In recent years up to a dozen specialist researchers at the Venom Systems and Proteomics Lab at NUI Galway's School of Natural Sciences have been collecting specimens and data.

"We're living in a time where we've got huge concerns about climate change, we've got insect decline and now it appears that we have this global invasive spider," said researcher Dr John Dunbar.

“What we need to do is to start monitoring it and to assess whether it is having a negative impact on native species. Spiders are really important in the ecosystem; they are keystone species and we don’t want to mess with that.”

While Peter Parker aka Spider-Man developed superhuman strength, speed, and reflexes from a radioactive noble false widow bite, unfortunately, you’re more likely to experience mild to debilitating pain, mild to intense swelling, reduced or elevated blood pressure, tremors, and impaired mobility. In rare instances, victims have also developed minor wounds at the bite site or had to be treated for severe bacterial infections.

Further contributions on the Narin incident today suggest that this spider could also be a Cave Spider.

So who knows for sure but one thing is certain if in doubt don't touch.

Said one commentator: "Just leave it [the Cave Spider] be. best policy it's no danger to anyone."