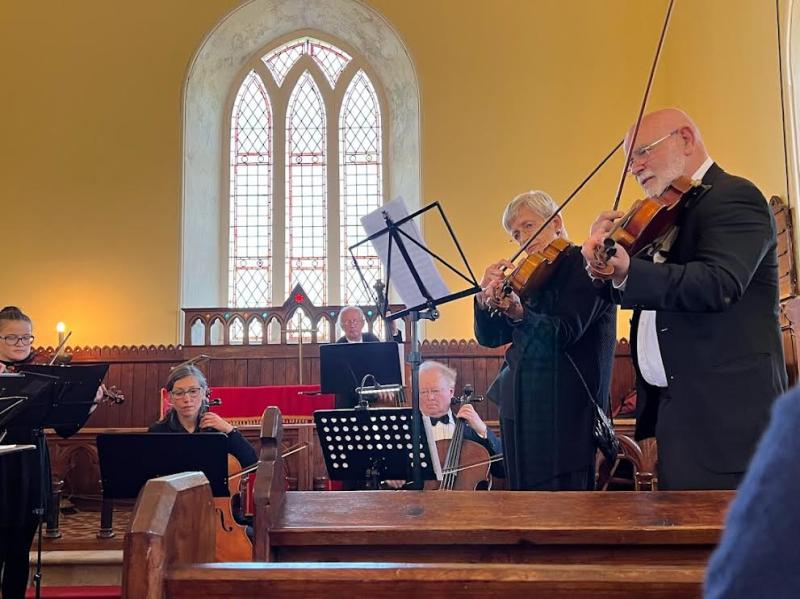 They all turned up.

Handel, Scriabin, Dvořák, Pierné, Holst, Schubert, Franchetti as did McLachlan. He's from Inishowen and turns out to be one of Ireland's best-known contemporary composers. He was in good company last Saturday afternoon when all could be heard right across the broad sweep of Gweebarra Bay.

The occasion is the Donegal Chamber Orchestra's return visit to the historic and picturesque Church of Ireland just off the N56 at Meenagowan, Leitirmacaward for a concert featuring compositions from all of the above.

The orchestra has been coming here since 2016 and on this occasion provided a wonderful soundtrack to a sunny afternoon event organised by the Gweebarra Community Group's Rolf and Angela Apitius and Carolyn Robinson.

So, with Cor Point and Trusklieve hill to one side and the spectacular Cleengort, Mulnamin and Derkbeg hills on the other, the stage was set for a musical experience like no other.

The orchestra was conducted by Victor Yélamo with his wife Orsolya Szabó-Yélamo as leader/soloist. Megan Armitage, Matthew Quinn, Anna Edwards, Aoife Fleury, Séana McGarry, Ríona McFadden, and Fiona Halligan were on violins; Hilary Flett and Paddy McAree were on violas; Vyvyan Howard and Regina Vogel on cellos, and Peter Doherty on double bass.

The programme had power and effectiveness, robustness when it was called for yet notes that were sensitive, exquisitely polished and the necessary emotion and artistry to match what the composer intended.

The encore piece was Tango by McLachlan. This was the second time the orchestra played this piece. It premiered at Rockhill House, Letterkenny in December.

Classical music is unique as this orchestra showed on Saturday. It poses many questions which are difficult or even impossible to answer without prejudice or preconceived views. Perhaps it falls into the category that some things just cannot be explained fully, neatly, and orderly, making it all the more exciting.

The Donegal Chamber Orchestra, one of the Donegal Music Education Partnership's performing groups, features classic string players from across the north-west and is dedicated to helping students and amateur musicians achieve the highest level of excellence in performance.

Founded in 2006 by Hungarian violinist Orsolya, a violin resource tutor with Donegal Music Education Partnership, and Spanish cellist Victor, (above) the ensemble's artistic director, it performs regularly throughout the county during the year and previous seasons have included trips to Spain and Italy.

Since its establishment, the orchestra has worked with many different guest artists, soloists, and conductors.

And how does classical music happen?

It's totally subjective and one might say it's an individual’s response, a musical intangible.

When all is said and done, it is how long the memory of the performance lasts and going on last Saturday's performances, a very long time.