Discovering the Bluestacks, the bog, the mountain paths, and the fun

In years gone by locals living in and around the Glenties area made this annual trek on the first Sunday in June to Carnaween to meet the good folk living on the other side from the various townlands in the Inver, Frosses, and Donegal Town areas

When you think of the Donegal skyline, you can’t fail to imagine towering, misty mountains set amongst the sparkling loughs and deep dramatic valleys. Some of our most iconic landscapes feature these towering peaks centre-stage.

Beloved by locals and visitors, they are a vital part of the county’s identity and have played silent witness to some of the most important events in the nation’s history. Whether you like to climb to the very top, gaze upwards to the summit, or just admire from afar, your DNA tells you, that's part of me.

It was with no little trepidation then, camouflaged with a healthy dose of bravado that I decided to take my first steps into exploring the Bluestacks (Na Cruacha Gorma) and one mountain, in particular, Carnaween (Carn na nÉan) on Sunday as part of a traditional pilgrimage to this elevated site of 521 metres high or 1,709 ft. Not too tall but big enough to start with. 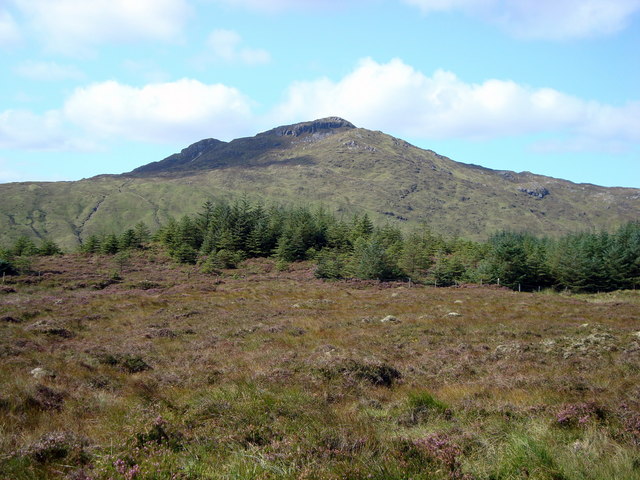 Written sources and folktales alike regularly refer to Carnaween mountain (above). The name has been variously interpreted as coming from the Irish Carn na nÉan meaning ‘mound of the birds’ or Carna Mhavin meaning ‘mound of wealth’. The latter was used by older writers, and the presence of Cruach an Airgid/Silver Hill nearby suggests it to be the more likely origin.

The route was a well-trodden one. In years gone by locals living in and around the Glenties area made this annual trek on the first Sunday in June to the mountain to meet the good folk living on the other side from the various townlands in the Inver, Frosses, and Donegal Town areas.

They exchanged stories, struck deals, and musicians came along and swapped tunes while locals danced sets of reels on the surface near the summit and formed friendships. In days gone by single men and women brought a stone with them to the top, and those whose stones matched in size were paired off, so this was an unusual form of matchmaking.

Upwards of 30 of us took to the hills last Sunday starting at the Glen Tavern (Dinny’s) before exiting the R253 and heading high up into hilly territory and a mixture of track, field, bog, rock, and more bog.

Deserted homesteads along the way told their own tale with maybe a weekly trip to Cormac Dinny's shop and pub at Greenans their only link with the outside world. Now only the deer take shelter in these tiny cottages.

Fences were climbed, bog holes leaped with varying degrees of success, and suntan lotion was applied and shared.

But the mountain was no closer; I couldn't even see it.

Eibhlin Coll, Anne Quinn and Margaret Flannery on the way to the top

My guides, Annie Quinn, Margaret Flannery, and Eugene Campbell were talking townlands, hills, and loughs now, a strange language but who was I to dispute their orienteering skills: Lugnagillew, Croaghloughanna, Crockbrack, Crockalougha, Mully, Meenagushoge Hill, Lough Magrath, the two of them.

Annie also recounted tales from mythology, Finn MacCumhaill and the Fianna, the Fianna cycle, the elopement of Diarmaid agus Gráinne, the existence of an ancient monastic site further into the hills, and the stories of how down the years this place of pilgrimages became engraved in everyone's heart forever.

Local tradition held that the Franciscans who fled their monastery at Donegal after the Plantation of Ulster lived east of Disert in the townland of Friary and made their way between Killymard and Glenfinn along Casan na mBrathar.

“This hill is steep,” I remarked

“You think? wait till you see the next one but we're nearly there,” laughed Annie.

At last, there was Silver Hill in the distance so I knew we were going in the right direction.

The final climb to the top of Carnaween was tight, especially when you are coming in Paddy last.

My group and other pilgrims from other directions were already in place enjoying the view, having the craic, and generally relaxing.
I just wanted to lie down and beg forgiveness for whatever I had done to put myself through this!

I need not have worried. Forgiveness was immediate. The panoramic views from the top on this crystal clear day were out of this world.

There were several mountains and lakes in the distance, Errigal and Muckish flying the flag for the Derryveagh mountains; Barnesmroe Gap, Donegal Town, Mountcharles, the faint outline of Co Sligo, the top of Sliabh Liag, Maghera strand outside Ardara, Rosbeg, Narin, Maas and probably a lot more I just couldn't identify correctly.

Ronan explained that he got the tune, 'Mac Eoghain Shéain agus níon John Chiot' a polka from the late Jimmy Campbell, and the second was from Bridget O'Gara, a great melodeon player originally from Léim an Ghabhra outside Ardara and married in Glencolmcille.

“Both Jimmy and Bridget died early this year, so it was great to play a tune for them on Carnaween.”

Killybegs man Adrian Murrin (above) also ensured another tradition was adhered to by supplying a wee drop of whiskey for all who wanted to partake from a shot serving tray.
Very ingenious and welcomed by all who felt the need.

Two participants deserve a special mention. 76-year-old Michael O'Boyle from Mountcharles and Marie Clinton from Fanad (above) said they did the climb from the Disert side of the mountain every year.

“We enjoy the challenge, you feel great once you get to the top. Look at that view, why wouldn't you?”

Michael reckoned he was probably the oldest to climb that day and admitted while the journey wasn't as challenging from his side it was still a day you needed to be ready for.

The top of the peak has two metal crosses similar to the one above the altar in the wedge-shaped graveyard site at Disert. These were erected on Carnaween by local men Tommy Brogan and Sean McBrearty to mark the Millenium. Some years ago Tommy also erected a metal statue of Finn MacCumhaill on the top of the mountain, but this was subsequently taken down, after becoming damaged during severe lightning storms.

There is also a metal box with one of the crosses containing a 'visitors book' in which walkers record their names and dates. I duly complied with the tradition and added my name to the list.

The journey home was just as adventurous with many a slip on grassy, wet bog hills to speed things up. It seemed a natural thing to do, why shouldn't a townie face the indignity of a fall or two, sure it was all part of the day's fun. Needless to say, limbs and muscles are still in recovery, and that sunburn, well it's still sore but nothing that can't be overcome.

Back at Dinny's eventually after a couple of hours of getting lost, climbing more fences, having a great chat with Ronan Galvin, avoiding sinking in bog holes, and a change of clothes and shoes, it was a case of swapping stories and enjoying the music in what remained of the evening sun before moving indoors to avoid the midges and start planning the next outing. A steady supply of good old cocktail sausages, chicken goujons, and a slice or three of Breezy Kelly's lemon drizzle cake soon restored the energy levels although the body was saying, wait till tomorrow.