Generosity of people in Co Donegal praised by Trocaire chief 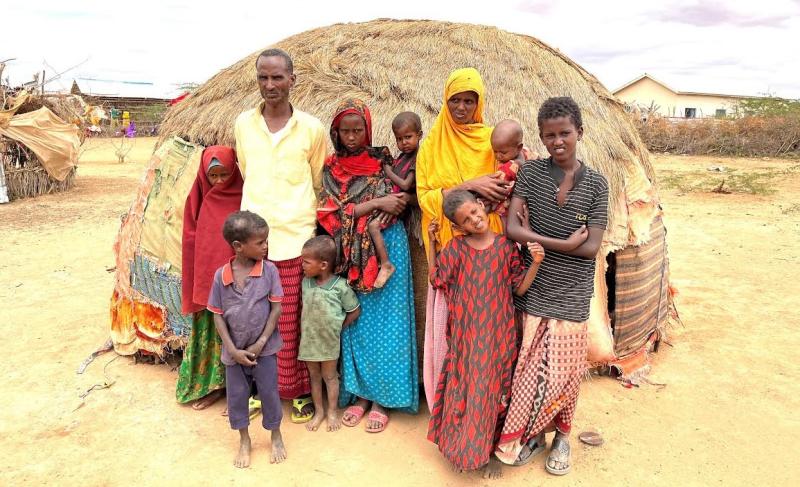 This family walked for 20 days from Wajid Region to Luuq town in Gedo Region, southern Somalia (approx. 70 kms) when the last of their goats died and they had no food to sustain the family

The vital support and solidarity of donors, especially the people of Co Donegal has been praised by Trόcaire’s chief executive, Caoimhe de Barra.

Trόcaire, the overseas development agency, supported 1.8 million people in 24 countries around the world in 2021/22, according to its annual report.

Ms de Barra said the last year was another marked by incredible challenges, with climate change and Covid-19 continuing to have an enormous impact in the countries where Trócaire works.

She added that the generosity of people in Co Donegal made Trόcaire’s work possible despite the challenges.

“Not only were health systems still overwhelmed but the secondary effects of Covid-19 were devastating with lockdowns, travel restrictions, and school closures costing millions of people their livelihoods. Children, especially girls, lost out on education and gender-based violence escalated."

The chief executive added other challenges during the year including the coup in Myanmar and the conflict in Ethiopia, both of which happened suddenly and with devastating human impact, and ongoing insecurity in eastern DRC.

“It was in this context that Trócaire further developed its capacity to be agile and resilient and to find ways to ensure we could meet the needs of crisis-affected people to the very best of our ability.

“Despite these challenges, we are proud to have reached 1.8 million people in 24 countries in Africa, the Middle East, Latin America, and Asia in the last year. This would not have been possible without the support and solidarity of our donors, and especially the people of Co Donegal who have once again shown their generosity and shared common goal for a just and equal world.”

You can find out more about the agency’s work by visiting www.trocaire.org

2021
Last year Trócaire’s work included supporting 1.2 million people in humanitarian crises around the world; 92,342 people fighting for their human rights and access to justice in Central America, Palestine, and Zimbabwe; 313,088 people in thirteen countries on climate and environmental justice; and 238,970 women and girls through empowerment programmes in fourteen countries.

Ms de Barra also used the launch of their latest report to issue a dire warning on the deteriorating hunger situation in East Africa and the Horn of Africa.

“23 million people in Somalia, Kenya and Ethiopia are suffering hunger, more than four and a half times the population of Ireland. It is estimated that 1,800 people are dying from hunger every day. That anyone, anywhere should die of hunger in the 21st Century is an absolute scandal.

"The crisis continues to escalate, driven by climate change and conflict and the situation is being exacerbated by the disruption of the global economy and food systems as a result of the conflict in Ukraine.”

She added that currently in Gedo region in southern Somalia, where Trócaire runs the health services, there is a huge increase in the number of people in need of support.

“In our hospital in Luug the number of children admitted with malnutrition has trebled since January as thousands of families are on the move with drought causing their crops to fail and their treasured herd of goats to die.

"Our team is hearing horrific stories on an almost daily basis of families losing mothers, fathers, and siblings from hunger as they walk for days to find food and shelter.”