Lifford woman wants council to ‘green’ up its act

Controversy over trees near council headquarters: Let there be light …

Overhanging branches that are blocking light, smothering windows, and damaging a house in Lifford have forced one local resident to call on Donegal County Council to ‘green’ up its act.

Dorina Browne, who lives in the house yards from council headquarters at the Diamond, says the trees are presenting her and her elderly mother with major problems.

"You can't leave the windows open because the flies come in and they catch on the trees. The two upstairs bedrooms are dark and you have to leave the lights on, even at this time of the year.

"The council used to look after the trees. They haven't trimmed them since lockdown and now they have got out of control. They are always telling us to go green, recycle and be environmentally conscious. I wish they would practice what they preach."
Ms Browne adds she could admire the beauty of the trees but not when they are allowed to grow so close to her home.

“The street needs regular aftercare, leading as it does to the council headquarters but these trees are just left to their own devices.

Message
"I want the council to maintain these trees on a more regular basis. Their staff walks up and down past them every day. I rang the council and left a message a number of months ago. I rang again two weeks ago and someone promised they would get back to me and I'm still waiting so I rang Cllr Crawford." 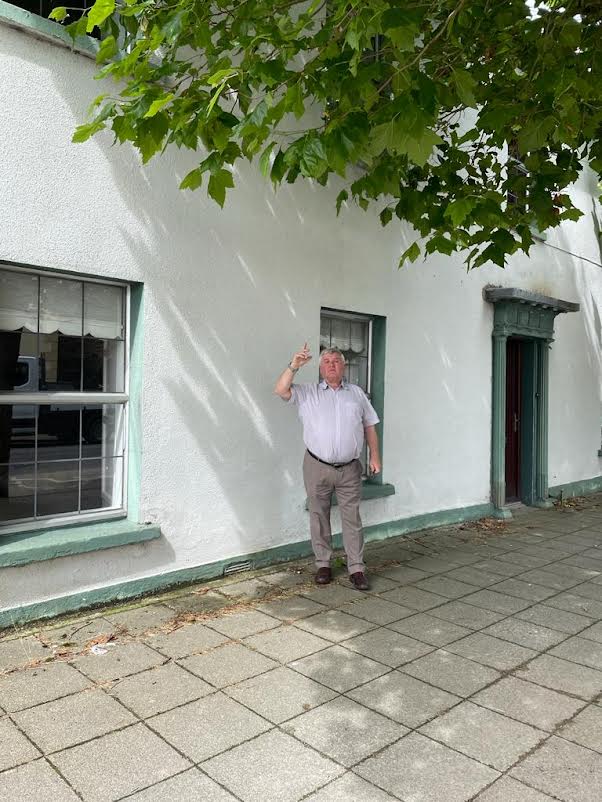 Look up at that... Cllr Gerry Crawford examines the overgrowth

The matter was also raised by the local councillor, Gerry Crawford at the recent Lifford-Stranorlar Municipal District meeting. He asked for clarification from senior roads engineer, Clare McGeever on what the council intended to do about the overgrowth problem.

"This has to be done. It isn't something someone can live with all summer. The branches are touching the windows. Is this something you are going to do or something we'll be told in September you are still looking at? Who's responsibility is this?”

Ms McGeever said she the trees were put in as part of a scheme and they are on the public footpath, their maintenance would now be the responsibility of the council's roads section.

"We need to take a look at the extent of the problem. Obviously, if it's something that is going to cost a lot of money we will have to come back to the members and seek a budget."
Cllr Crawford said that was unacceptable.

"You or I or anybody else wouldn't live with this. No daylight, no sunlight, no air, trees touching the windows. This is not good enough. This is not something that's going to go on the back burner and put in a filing cabinet, this has to be dealt with.”