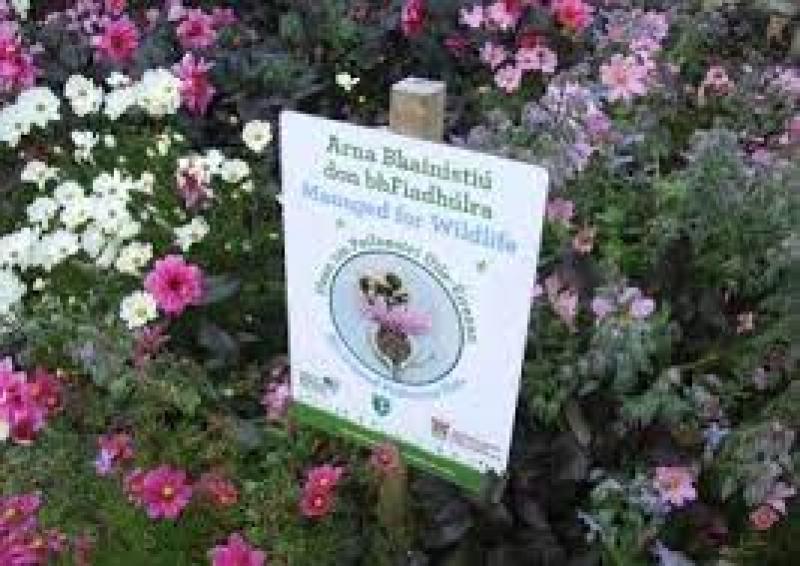 Pollinator signage can be seen in different areas across Inishowen

A public meeting will be held in Moville next month to discuss plans for local biodiversity projects.

The meeting, organised by the Moville Tidy Towns committee, is aiming to raise awareness of the All-Ireland Pollinator Plan.

The cross-border pollinator plan provides a framework to bring together different pollinator initiatives from both sides of the border to protect pollinators and the service they provide into the future.

Moville Tidy Towns spokesperson Maria McHugh that it is “gratifying” that more and more local schools and community groups are taking onboard pollinator recommendations, however more is needed to be done.

Maria said: “It is evident when travelling around Inishowen, that community groups, schools and many more, are trying to take on board what the All Ireland Pollinator Plan is recommending.

“This is gratifying to see as it is a collective effort that is needed. There is a wide variety of Irish wildflowers and flowering grasses that many see as weeds, when they appear in areas of otherwise green leafy grass on traffic islands, road verges or lawns.

“It is challenging to change a mindset of the majority where manicured lawns are seen as the norm, with carefully pruned shrubs delicately balanced with annuals and perennials chosen for their colour and appearance to the human eye.

“Pollinators, including our many bee species, don’t perceive gardens in the same way.

“They search for food, pollen rich sources, and find well manicured areas starved of it. If you find it hard to let go of the many generations attitude to the perfect tidy garden, start small.

“A section in one corner allowed to grow more wild, cut less often, is a great start and creates a good patch dedicated to pollinators.

“After a couple of years, as more wild species flower, you might feel brave enough to expand, but every little is a start.”

Maria highlighted some of the many pollinator initiatives already underway across the peninsula.

“A small section of the traffic island between Moville and Greencastle developed as a Pollinator Patch is in stark contrast to the surrounding grass with different species of wildflowers and flowering grasses appearing along side plants chosen as supportive to pollinators in food and shelter with some similar patches on Moville Green.

“It is well known that Buncrana actively designates sites for pollinators throughout the area to support biodiversity and likewise, areas at Barrack Hill in Carndonagh and along the verges in Culdaff towards the beach, like many other spots around the peninsula, have “do not mow” or “managed for biodiversity” signs and a variety of grasses flower alongside wildflowers.

“The signs help people understand that the areas are being deliberately left “wild” and are not simply neglected but not necessarily why.”

Maria explained that if pollinator population figures continue to decline, then Irish crops will be adversely affected.

"If our population of pollinators continues to decline because there is not enough pollen rich wild and native plant species for them to feed from, we will also see a decline in successful pollination of our food crops and the impact on our ecosystem of pollinators will become more evident but it will be too late so we need to act now.

“Towards the end of a flowering cycle, those areas that appear to be dying or brown are vitally important for developing the seeds for more to flourish the following year.

“From these areas, some seeds may be collected to be sown in areas they are scarce, they may spread naturally or may simply be a food source.

“This brown appearance is quite different to the dead areas we see when spraying herbicide has occurred and is of benefit not just to our pollinators but also to birds and small mammals.

“Unfortunately, the brown appearance of areas let go to seed often create more complaints from people, sometimes described as unsightly, than the appearance of a dead area which has been sprayed to remove growth. This is where understanding the need to allow seeds to develop is important.”

With summer coming to an end, Maria encouraged local residents to evaluate their own areas to see what they can do to help.

She said that autumn is an essential preparation time for spring, as early flowering weeds such as dandelions and clover become vital food sources to pollinators coming out of hibernation.

Maria added: “So ake time to read the All Ireland Pollinator Plan, look at an area of your garden to re-wild, create a pollinator friendly window box if you’re not fortunate to have a garden or join a community allotment and see what you can do to help.

“Remind yourself that weeds are wonderful and aim for beauty for bees rather than plants for people as a positive mindset to support our ecosystem.

“While having areas aesthetically pleasing for the people population does have it’s place in making our towns and villages attractive to visitors, recognising the rights of nature and the need to do something now is so important.

“If we all do a little, collectively we have a positive impact. If we all take the attitude that it’s okay, someone else will do something, our ecosystem will take a hit and before we know it, some of our many species of pollinators will become extinct.

“Thank you to everyone who already does something to help the delicate balance of our ecosystem. And if you don’t, why not start now. Do something before it’s too late.”

Moville Tidy Towns is inviting representatives from local schools, sports clubs, volunteer groups, businesses, farms and interested individuals to an open meeting on September 26 to discuss actions for pollinators in the area and share good practices in supporting biodiversity.

If you are interested in attending, please complete the online form found at forms.gle/YcwiUGNiGzVsRWdB9 or email movilletidytowns@gmail.com.