Due to be released next year 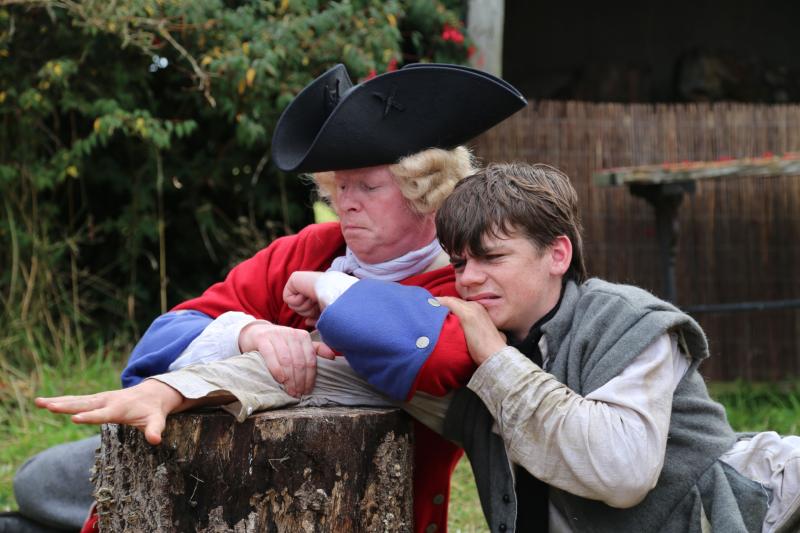 Antoin O’Doherty, right, bring tortured by a British soldier in one of the scenes from the new film, Faith of our Fathers

A young actor from Gaoth Dobhair is currently making a name for himself in a new film set in Penal times. Antoin O’Doherty has one of the top roles in an imaginative film called Faith of our Fathers which will hit the big screen next year.

It tells the story of a Catholic priest hiding in fear of the austere laws of the time, and the whole community’s efforts to shelter him as he ministers through the hedge schools and Mass Rock to strengthen the faith of the people.

The Penal Laws were a series of laws that sought to uphold the establishment of the Church of England against Catholicism and Protestant nonconformists by imposing various forfeitures, civil penalties, and civil disabilities upon these dissenters.

Antoin plays the role of Paul in the film.

“I loved every minute of it onset and offset,” he said.

“ The crew and actors were great and very welcoming. By the end of it we were like one big family. I learned lots from the other actors and made a lot of new friends.”

Global TV network EWTN is behind this new production currently being filmed on the beautiful grounds of Dromantine Retreat and Conference Centre outside Newry, County Down.

The production involves over 90 people including actors, extras, film crew, and all those working behind the scenes over the many weeks of production.

In coping with the significant work effort, Antoin said even though the days were really long, you could be in hair and make-up at 8am, and on set until 6pm, there was always a bit of banter and craic going on, between jokes and stories being told.

The film juxtaposes the strong and unyielding faith of the Irish people during Penal times, compared to the trend towards indifference in the modern day.
Irish is spoken in various scenes which further enhances the realism of the production.

The film’s director is County Down man Campbell Miller. A multi-award winner for his previous work in film, Campbell said: “As well as our amazing actors, the camera, costume, make-up and art departments have been incredible in making the story a reality.

“Everyone is working so hard behind the scenes. The film is coming together well and is looking good. I think we will get an amazing result.”

The film is due for broadcast in 2023 on Sky 586, Virgin Media 815, Amazon Prime, Netflix, and 11 satellites globally, as well as streamed on other platforms and networks around the world.