Free contraception would have been unimaginable a generation ago 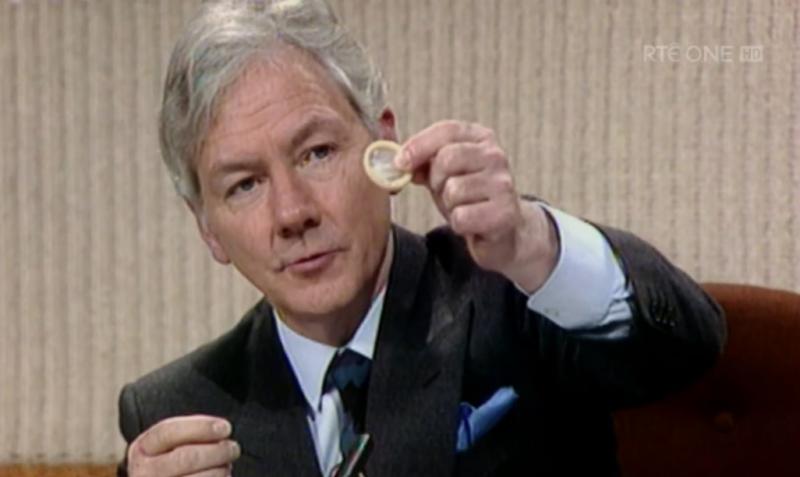 A condom under scrutiny on the Late Late Show in 1987

This week saw the introduction of free contraceptives for 17 to 25 year-olds whose assigned birth gender is female.

We are told that this is the first step in a bigger roll out to make free contraceptives more widely available.

It is a big move, and one that will help the health and well-being of our younger women, though it would have been nice if it had been extended to all young people. There are other caveats, the most significant being that only GPs who have signed up to the scheme will offer free consultations to young people.

However, it is still a major step forward, and it is great that our young people here in Donegal can go in and sit with their GP and discuss the best contraceptive options for them.

We have come a long way as a country in a generation, and I hope that any embarrassment and awkwardness around buying or discussing contraception is not being passed on to our younger people.

It is hard to believe that condoms could not be bought legally in Ireland until 1985, and that the government vote that allowed their sale passed by only 83 votes to 80 in Dáil Eireann. That particular vote was seen as the first major crack in the influence that the Catholic Church held over the Irish legislature. The Fine Gael - Labour coalition led by the late Dr Garret Fitzgerald secured the narrow victory over what was a conservative Fianna Fáil opposition party.

At that time, the AIDS epidemic was well underway, though it would be another few months before the death of Rock Hudson brought it very much into the public eye.

When I was a teenager, condoms were something people told jokes about; they certainly weren’t something that you went into a local shop and bought for their intended purpose.

It would be a few years later, when I lived abroad, before I saw condoms widely displayed on shelves in pharmacies and other outlets. Back home, they were only available in vending machines in some male toilets, or over the counter in pharmacies.

In 1987, the late broadcaster Gay Byrne played a part in addressing the taboo surrounding condoms by producing one on air and giving guidance on how to use it.

And if he didn’t succeed in entirely  breaking the taboo, he at least placed it firmly in the spotlight so that it could not be ignored.

There was, of course, national uproar. But the beloved ‘Uncle Gaybo’ could push the boundaries and challenge conventional thinking in a way in which most mere mortals could never have done. Or at least, not without sacrificing their careers.

The horrific and rapidly growing number of  deaths during the AIDS crisis played a big part in fast forwarding the mainstream distribution of condoms.

Nowadays they go far beyond being a simple contraceptive or sexually transmitted infection (STI) barrier, with any amount of textures, sensation levels, flavours and accompanying stimulants and toys available to add to the experience.

And if it is shocking that the sale of condoms only came into law in 1985, legislation allowing doctors to prescribe the contraceptive pill was also relatively new at the time.

Up until 1979, the importation and sale of all contraceptives was prohibited.

In 1973 a Supreme Court ruling found that a constitutional right to marital privacy covered the use of contraceptives. Despite the obligation to change the law to reflect the court’s decision, pressure from conservative religious forces in Irish society - and no doubt, a desire by politicians not to upset the voting public - meant that change came very slowly.

Several proposed Bills failed in the Oireachtas before the Health (Family Planning) Act was signed into law in 1980. Strictly limiting the legal provision of contraceptives to ‘bona fide family purposes,’ the Bill had been introduced in 1979 by the then Health Minister, Charles Haughey.

The contraceptive pill thus became available on prescription for married couples only.

Today there are numerous options for contraception; some are only available by prescription, others can be conveniently bought from a wide variety of outlets, ranging from your local petrol station or corner shop to specialist adult stores.

There is no ‘one size fits all’ especially given that many types of contraception are hormone-based.

It can be helpful for young women to know their mother’s medical history and experience with contraceptives in order to help find the best method or type for themselves. Talking about sexual health and contraception should be as easy as talking about any other aspect of health.

The recent step towards free contraception will be a huge help, and will empower young people to greater body autonomy. Like so much else in life, honest and open communication goes a very long way.