Hat trick for Current Option on final-day feature at Galway 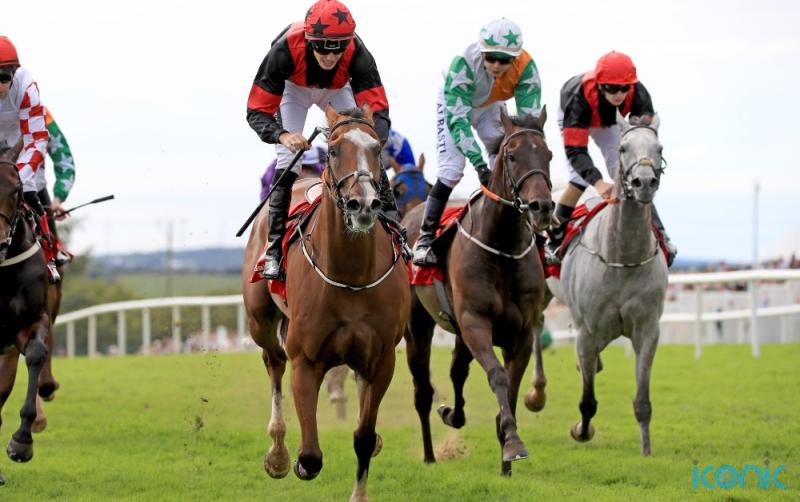 Hat trick for Current Option on final-day feature at Galway

Successful in the €110,000 feature in each of the past two seasons, the Ado McGuinness-trained six-year-old was an 11-2 chance to make it a hat-trick after finishing fourth in Tuesday’s BMW Mile.

Partnered by 5lb claimer Cian MacRedmond, who was also on board 12 months ago, Current Option could be spotted travelling strongly into contention as the field rounded the home bend.

British raider On A Session held a narrow advantage once straightened up, but he was unable to resist the McGuinness runner, who finished strongly to score by a length and a quarter.

McGuinness said: “I might never get a horse like him again. He’s been fabulous to have and the lads (owners) are great supporters.

“He’s a Group Three winner, a Listed winner, won a list of Premier Handicaps and taken us everywhere. He just loves this place and was unlucky the other night.

“He’s just down to a very nice mark and we’ll probably try for the big handicap in Leopardstown. He’s won that before as well.

“Some of my horses were a bit out of form in June, but they have come back and we always primed this fellow for here. We give him the same routine each year and try to prepare him for here. It works.”

Having finished fifth in the Galway Plate on Wednesday, Battleoverdoyen was the 11-10 favourite to register back-to-back wins in this €25,000 contest.

Gordon Elliott’s charge looked sure to prevail after going clear from the home turn, but tired racing up the hill and 9-4 shot Politesse got up to beat him by a length and a quarter under Conor Orr.

“It’s taken so long to get her back after an injury in Cork and she loves good ground, she really bounces off it,” said winning trainer Lorna Fowler.

“I was so disappointed when the rain came but when I walked the track I was really happy with it. She was so tough, I’m really proud of her. Conor and her make a great partnership.

“It’s limited what she can go for so we may give her a break and try to get some black type early autumn. She’s not a winter girl.”

Beaten half a length into second place at the track on Friday, the Emmet Mullins-trained five-year-old comfortably went one better in the hands of Conor Clarke.

Mullins said: “It’s a great day for Conor who joined me earlier in the year. That’s the second winner he’s had for me and hopefully things will start getting into gear for him soon. A winner at the Galway Festival is great for any young jockey.

“He was 4lb out of the handicap on Friday so he had 4lb less here. He’s a horse that loves the track.

“He’ll be kept on the go and will possibly mix it back on the Flat.”

Nathaniel’s Dream was a 12-1 winner of the Kenny Galway Handicap Hurdle for Tony Martin and Sean O’Keeffe, while Elliott’s Vado Forte (16-1) and landed the Lord Hemphill Memorial Handicap Chase – providing jockey Jack Kennedy with his first winner of the week.

“It’s been a long, tough week, but it’s nice to get that now,” said Kennedy.

“I was hoping he’d run well, but wasn’t expecting him to do that. The day in Limerick when he won we let him on early and he stayed galloping so we did something similar here and it worked.

“He’s really dug deep. He stuck his head down and galloped all the way to the line.”