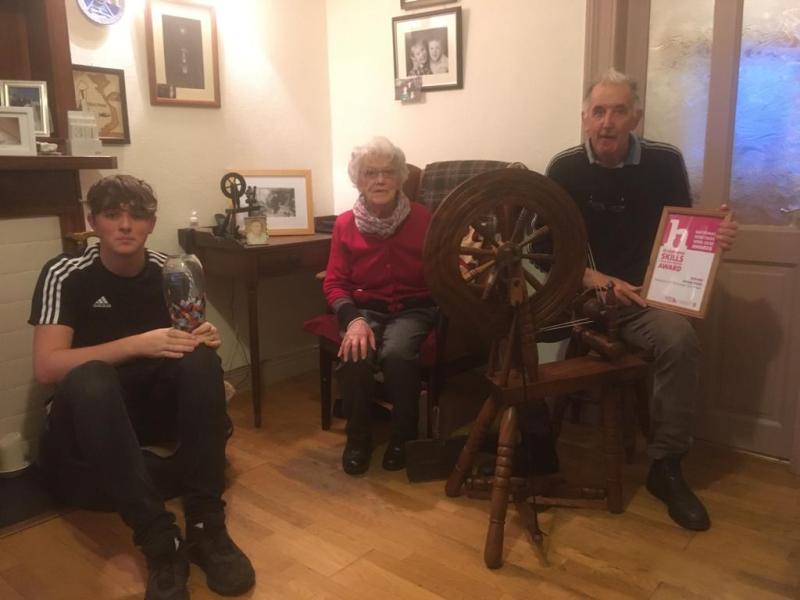 Donegal has a new All Ireland champion, Carndonagh's Johnny Shiels.

Speaking to Donegal Live, an extremely modest Johnny explained he had won the 'Re-Learning Skills from Our Heritage' Award 2020, at the online awards ceremony.

“I actually had the wheel for a long time and had named it 'Old Glenswilly'. It went back 200 years, at least.

“All those wheels got woodworm or they were thrown out. They weren't wanted in the 1940s and 1950s and 1960s. They were dumped. This one survived because it was made of oak. Most spinning wheels were made of sycamore, a local timber, which would have been prone to rot, as a result of the damp in the cottages, or woodworm. That is why there are so few spinning wheels but Sean kept this one or didn't throw it out.

“There wouldn't be many like 'Old Glenswilly' to be honest. It wasn't as bad as it looked, although it was really dirty and had pieces missing so I decided to restore it. At the same time, The Heritage Council were looking for projects for National Heritage Week 2020, so I made some videos and took photographs, while I was restoring it, from beginning to end,” said Johnny.

The fourth generation, Johnny's four sons: Conor, James, Austin and Paul like to get involved in his woodworking projects. His daughters: Sarah and Briana “also do a bit” in his Bridge Street workshop.

With a smile in his voice, Johnny said: “We made spinning wheels when we were children, we had no choice. We grew up in the mid-70s, 80s and 90s and it was just the thing.

“My grandfather, Johnny, made them. He learned to make them from the 1920s, right through to WWII. It was the done thing at the time. My granda was from Bridge Street. Going back to the 1920s, there was a family in the town,I think they were called the Lynch's, and he picked it up from them.

“At that time there would have been a lots of wood coopers. They actually were coopers and would have made the barrels for the beer and the churning. My granda was a cooper and wheelwright from the 1920s through to the 1940s and then it all faded away.

Johnny makes what he described as a traditional Donegal wheel.

He added: “At that time, we would have been quite busy making spinning wheels. My father would let you make some minor part. He would make the wheel and the flier. I worked on and off at that with my brothers. I actually lived in Australia from 1980 something to 1990 something, building high rise buildings.

“You wouldn't say it is full-time work but it is coming that way now. There is a revival. If you went at it with a proper marketing and selling viewpoint you would have a better market but it is basically word of mouth.

“I also do some spinning as well. Alas, wool is practically worthless. There is no minimum price in Ireland as there is in Britain. Alpacas are becoming more popular. They are a nice animal and their fleeces are worth a bit of money. I really just spin for demonstration purposes. There is no-one in Ireland doing what I do. I have a good social media presence and following and the Germans and Americans are very interested. There are two wheels now 'Hansel' and 'Gretel' on my website, which are going to Germany,” said Johnny.

Keen to pass his knowledge onto future generations, Johnny is also a member of the Heritage in Schools panel, along with Martin Moloney, the owl expert, from Buncrana.

He said: “As well as making spinning wheels, I am a member of the Heritage in Schools organisation, as a Heritage Expert, which I love. I go to schools all over Donegal, with the spinning wheel and show it to the children and get them treddling it. Sadly, that is all changed as a result of Covid-19.”

In the 1920s, Johnny said a spinning wheel in a home would have been “priceless”.

Johnny said: “In those days, a spinning wheel kept the house living. Even today, my mother, who is 90, Kathleen 'Bisses' (née Doherty) originally from Slavery, would warn me not to let a child touch the wheel. Back in the day it would have been disastrous for a family if a spinning wheel had got broken. However, the children in the schools love it.

“My mother and father, James, used to do spinning at all of the markets. I am pleased that the owner of 'Old Glenswilly' has given me permission to take it into the schools or to markets in Letterkenny and Carndonagh, hopefully when this coronavirus has passed.

“'Old Glenswilly' is a flax wool wheel, from the early 1800s. There were literally hundreds of spinning wheels made from all over the North of Ireland to Donegal for spinning flax.

“Flax is really hard to spin. It is hard work. It takes longer than wool because it is flax has to grow out of the ground. You have to ret it and scutch it, whereas you can go and get a piece of wool and start spinning. In Donegal people used it for wool and weaving Donegal tweed,” said John.

With a spinning revival underway, Johnny Shiels gets regular requests for wheels. “I might make 30 more,” he laughs.

Johnny makes his wheels over weeks, months and years.

The Colgan Hall caretaker said: “People are prepared to wait. They are in no rush. My sons will be able to keep up the business if they wish. I would like to see funding becoming available for the restoration of old spinning wheels but we'll see.

“I like doing school visits best. Another project I am involved in is the Design and Crafts Council Ireland's 'Craft It' project. 'Craft It do some really nice fibre and fabric projects with children. They make the thread on the spinning wheel and then they go on to weave.”

There was double cause for celebration in the Shiels family this year. Johnny's mother Kathleen celebrated her 90th Birthday in April.

Johnny fondly recalled: “When we were all wanes, my mother had a little loom that she wove on, while she watched the nine of us. She did this when we thought she was old but she wasn't. For her 90th Birthday, I got the loom back and fixed it up for her for a present. It was lovely to see her at the loom again,” said Johnny.

Johnny's amazing Facebook page is 'Johnny Shiels Inishowen Spinning Wheels' and contains videos and photographs of all his projects.