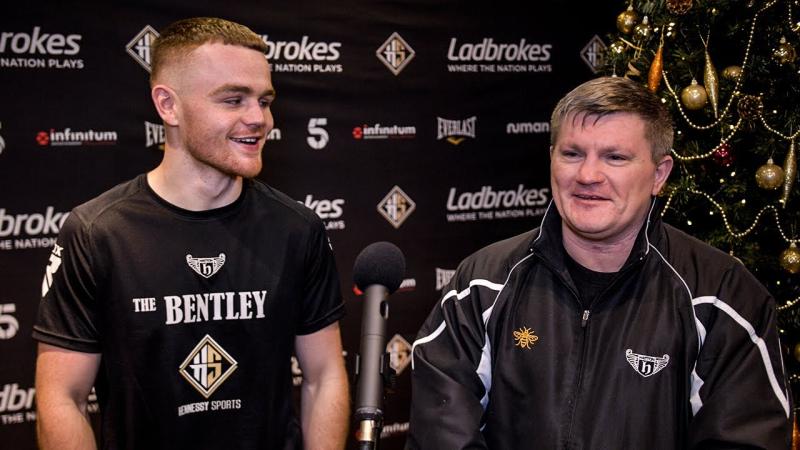 Brett McGinty wants to emulate his coach Ricky Hatton and be a crowd-pleasing puncher.

The St Johnston man (3-0, 1KO) is back at the Skydome in Coventry for the fourth fight of his pro career on Saturday evening.

McGinty recorded his first stoppage since ditching the amateur vest when he downed Teodor Nikolov at the Skydome in September.

McGinty carries a big support from the north west and promotor Mick Hennessy was impressed by the vociferous contingent who are rowing in behind the former Commonwealth Youth Games silver medalist.

“It doesn’t matter where or who I am fighting, I will always entertain you,” McGinty said.

“I’ve just got a crowd-pleasing style. I always had it in the amateurs. I’m a come-forward fighter and am never, ever on the back foot. You will always see me in an exciting fight.

“I am always there, right in front of them, and I am willing to give one and willing to take one. Anybody tuning in to watch me is definitely going to get an explosive performance.”

McGinty is based in Manchester where he works under former world campion Hatton.

McGinty might have been too young to fully appreciate the famous 2005 night that saw ‘The Hitman’ crowned world champion in his home city, but the former Oakleaf ABC amateur is taking all of Hatton’s words on board.

He said: “Working with Ricky is unbelievable. He’s passing all the knowledge he’s experienced in his career and all those world title fights, and you couldn’t really ask for anyone better, someone who has been there and done it all.

“We are both aggressive fighters and he was obviously a brilliant body puncher and that is one of my strong points as well.

“We’ve been working quite a bit on that, finding the right gaps, not just letting the shots go, making sure they get through and making my shots sink in.

“Ricky makes sure you put everything into it, but you know it is all good stuff that is going to help you, improve you in the ring and take you forward.”