Paul Dooher was also disqualified from driving for ten years 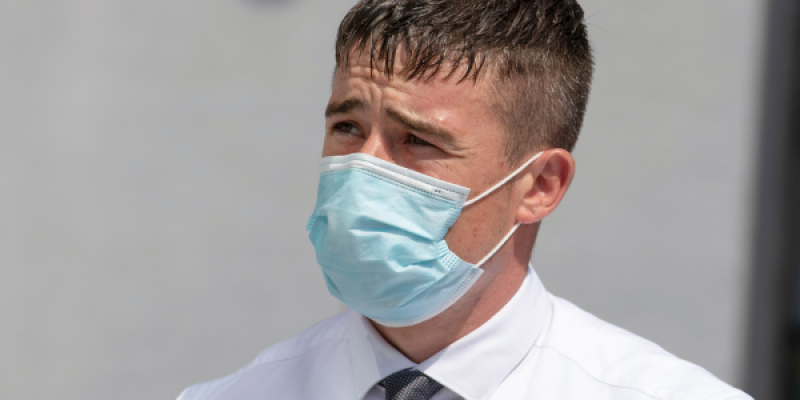 A man has been jailed for four years and disqualified from driving for ten years following a hit-and-run incident in which a childhood friend was killed.

Father-of-two Dooher, of Culdoire, Gortlee, Letterkenny, as charged with hit and run failing to report an occurrence of an accident, not having insurance, using a vehicle without the consent of the owner and driving without a driving licence on June 15, 2020.

Family members of the late Jason Haughey, who lost his life when struck by a car at Windyhall, Letterkenny, were present in court for the sentencing of Dooher.

Dooher, who has 20 previous convictions, nine of which relate to dangerous driving, was driving a vehicle without permission and was disqualified at the time.

“Mr Dooher left someone lying at the side of the road,” Judge Aylmer said. “He obviously knew that he struck someone and must’ve been injured.”

Judge Aylmer said that Dooher’s disqualification and the unlawful use of the vehicle were aggravating factors.

Judge Aylmer deemed the case to merit a six-year prison sentence before mitigation.

The mitigating factors, the Judge said, were Dooher’s early plea and that the accused’s remorse was ‘quite genuine’.  Dooher had previously submitted a letter to the court in which he apologised to the family of the late Mr Haughey.

Judge Aylmer said: “His involvement in the death of a childhood friend clearly weighs heavily on him.

“He appears to have qualified himself as a plasterer. He considers this as a turning point.”

Garda Cathriona Flynn told the court that a report was received at 4am on Monday, June 15, 2020, of a male laying on the roadway at Windyhall, Letterkenny.

Mr Haughey’s body was taken to Letterkenny University Hospital. The 30-year-old was pronounced dead at 5am.

At 11am that morning, Gardaí received a report of a suspicious vehicle in Ballybofey. The headlight was damaged, the left section of the front bumper was broken and blood particles were located in an inner section of the lamp. The vehicle was seized and taken for examination.

The car was registered to Sylvia Darby, who was in a relationship with Dooher. She said she had an argument with Dooher and he left, driving her car, at 2.30pm. CCTV footage showed Dooher in the vehicle from the afternoon through to the early hours of the morning.

Niamh Harley, who was Mr Haughey’s partner, said in a victim impact statement they had been in a relationship for 12 years.

“He my first love and best friend,” Ms Harley said in a statement read out in court.

“His death has broke my heart. He would’ve done anything for me and I will never forget him.”

Mr Haughey’s sister, Chantelle Diver, said that his death had ‘affected every aspect of our lives’.

“Everything is a constant reminder that he is gone,” Ms Diver said in a victim impact statement. “I spoke to him or seen him every day. He was like a second dad to me. I always speak highly of him and he always pushed me to do better. He always put a smile on my face.

“Every day, he is missed. I can’t put into words ow hard it was to lose him and organised his funeral. Jason is the real victim.”

A milkman came on the scene and found Mr Haughey’s body.

A medical examination of Mr Haughey’s body confirmed that his injuries were consistent with being struck by a vehicle.

Dooher presented at Letterkenny Garda Station and was arrested for failing to remain at the scene. He told Gardaí that he panicked as he was a disqualified driver and he left the scene.

At a previous sitting of the court, Dooher said he was ‘heartbroken’ over Mr Haughey’s death. “I dwell on it every day,” he said. “I am very sorry.”

Dooher was sentenced to four years in prison and disqualified from driving for ten years.

Dooher has been in custody on other maters since October 2021, with this sentence to start from February 8, 2022.