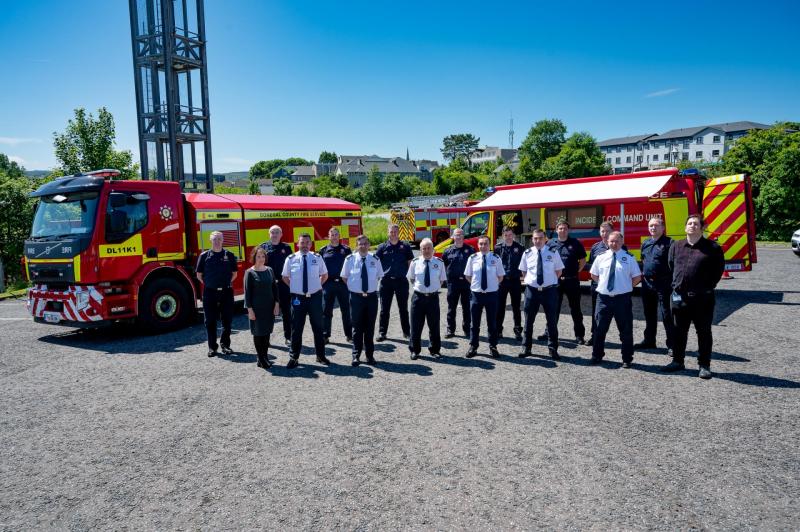 The official handing over of the new state of the art €256,000 Water Tanker and Incident Command Unit to Donegal County Fire Service took place this week at a special event at Letterkenny Fire station.

The Water Tanker and the Incident Command Unit are funded by the Department of Housing, Planning and Local Government (The Department). 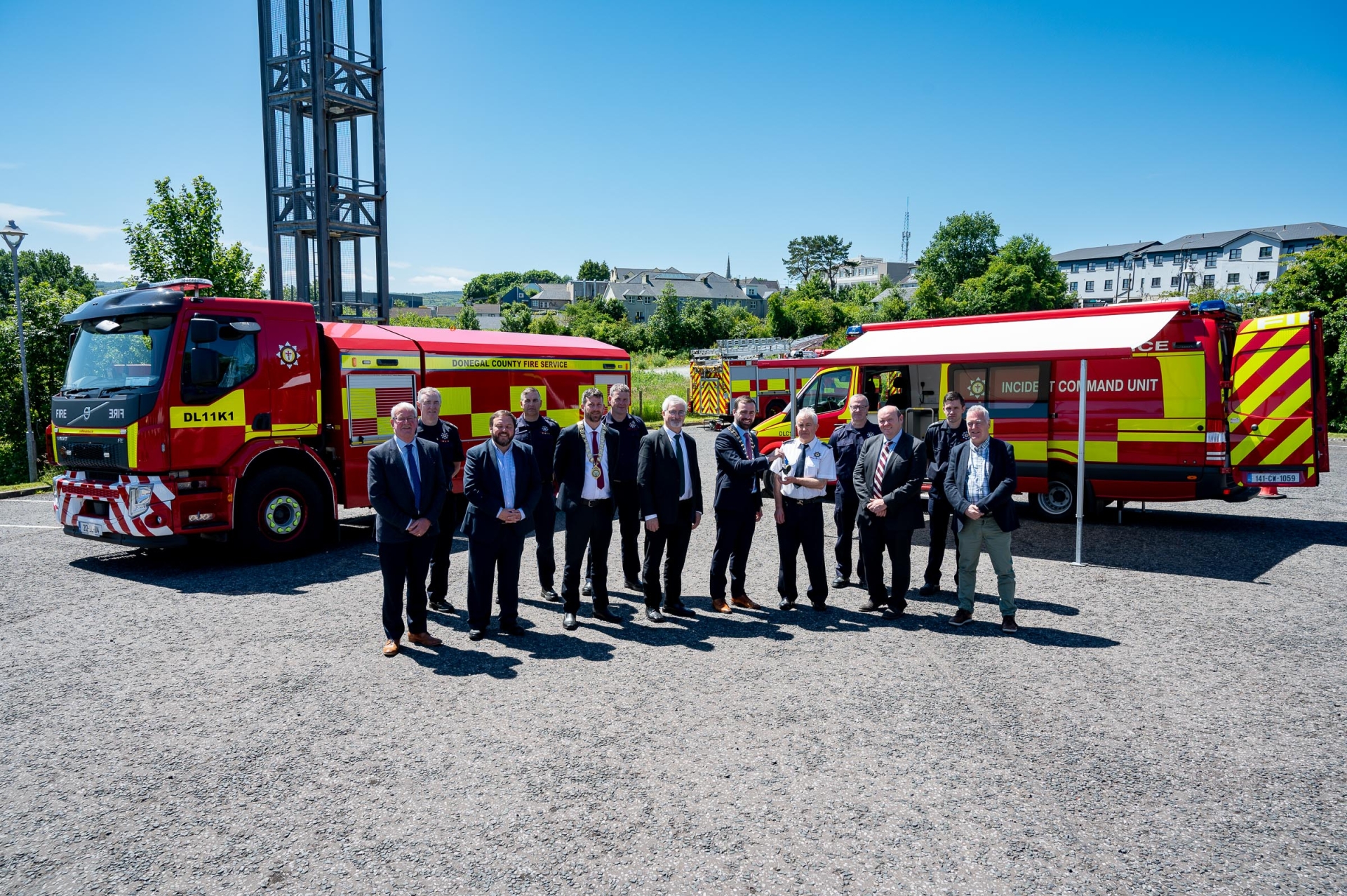 The new Water Tanker which costs €183k and the Incident Command Unit which costs €73k will be based in Letterkenny Fire Station and will serve all stations in County Donegal and according to Chief Fire Officer, Joseph McTaggart “will enhance the ability of Donegal County Fire Service to deliver the operational fire service to the community it serves”. 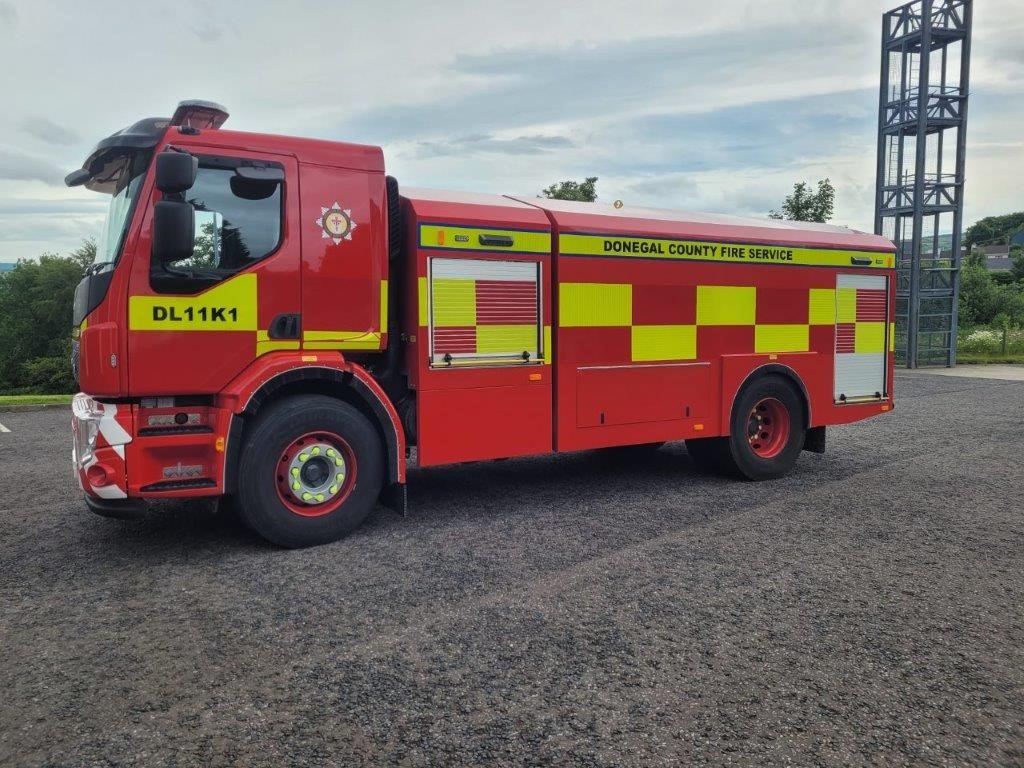 The Volvo FE 350 Water Tanker appliance is a specialised vehicle with seating for a crew of two. The primary purpose of the water tanker is to transport water to the scene of operations. The vehicle has a water carrying capacity of 8,500 litres for fire-fighting purposes. 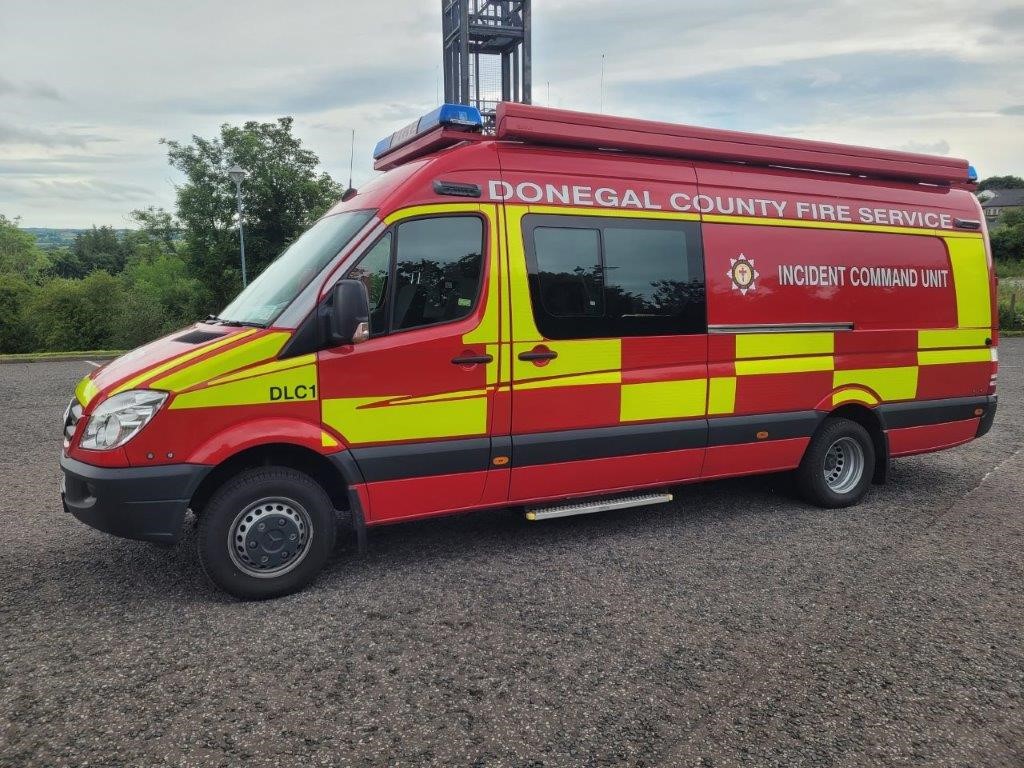 Supplied by Sídheán Teoranta of An Spidéal, Co. Galway, the vehicles are also equipped with the most up-to-date emergency lighting, high-visibility markings and come fully equipped with many features which represents the very latest in modern fire-fighting technology. Sídheán have built a number of new appliances for Donegal County Council over the years and they have a track record of delivering first class appliances to the local authority sector over a long number of years. 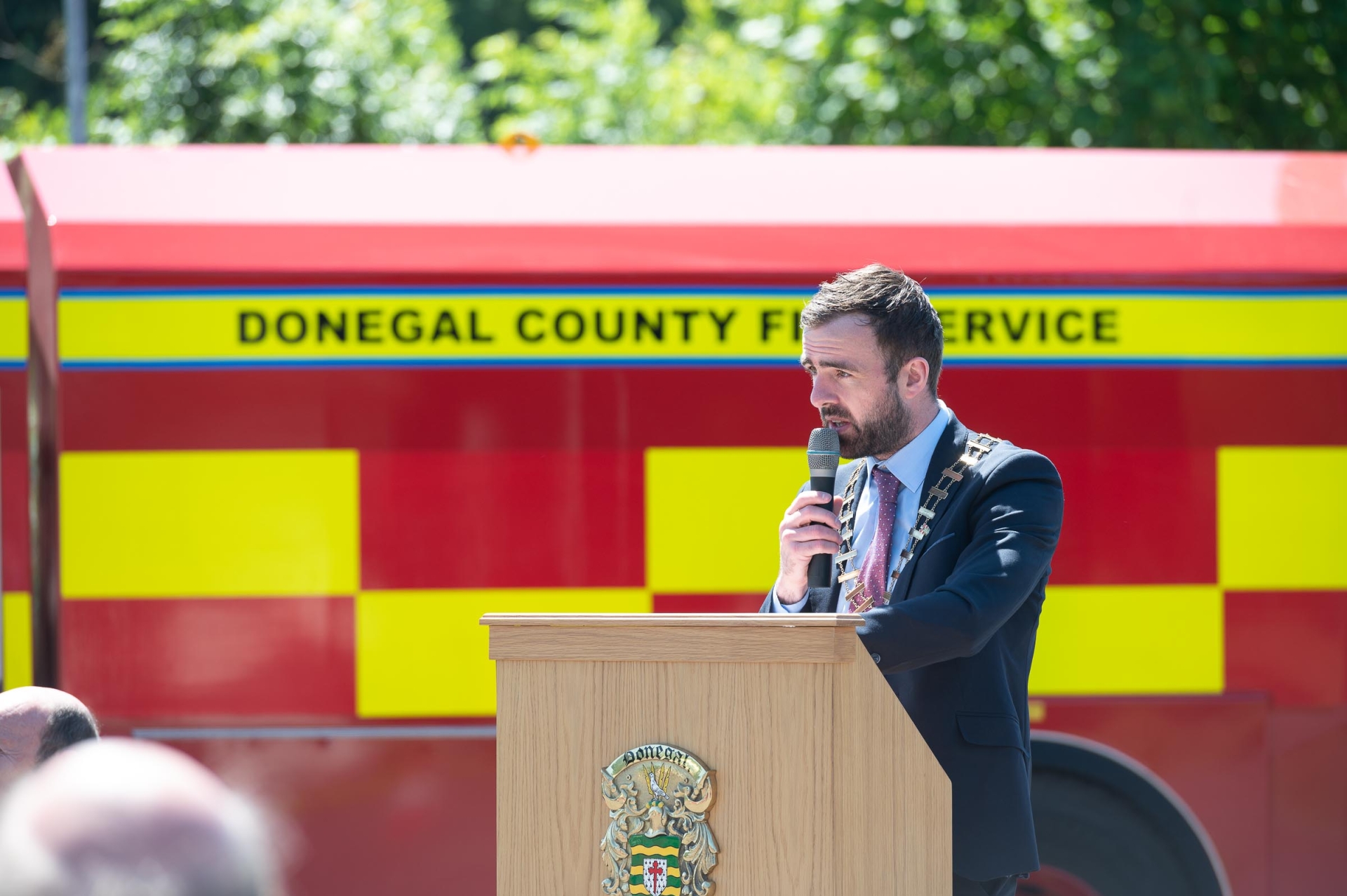 Cllr. Jack Murray, Cathaoirleach of Donegal County Council during his speech at the unveiling and blessing of the Water Tanker and Incident Command Unit in Letterkenny on Monday. Photo Clive Wasson

Speaking at the event Cllr. Jack Murray commended Donegal County Fire Service for their dedication and commitment saying, “Donegal County Council is rightfully very proud of its fire-fighters. This is a group of people who are very passionate and very dedicated to their roles as fire-fighters, and to the communities which they serve”. Cllr. Jack Murray also complemented the new vehicles saying,” the vehicles on display are truly state-of-the-art vehicles that are as good as any specialised vehicle you will find anywhere - not just in Ireland - but anywhere in the world”. 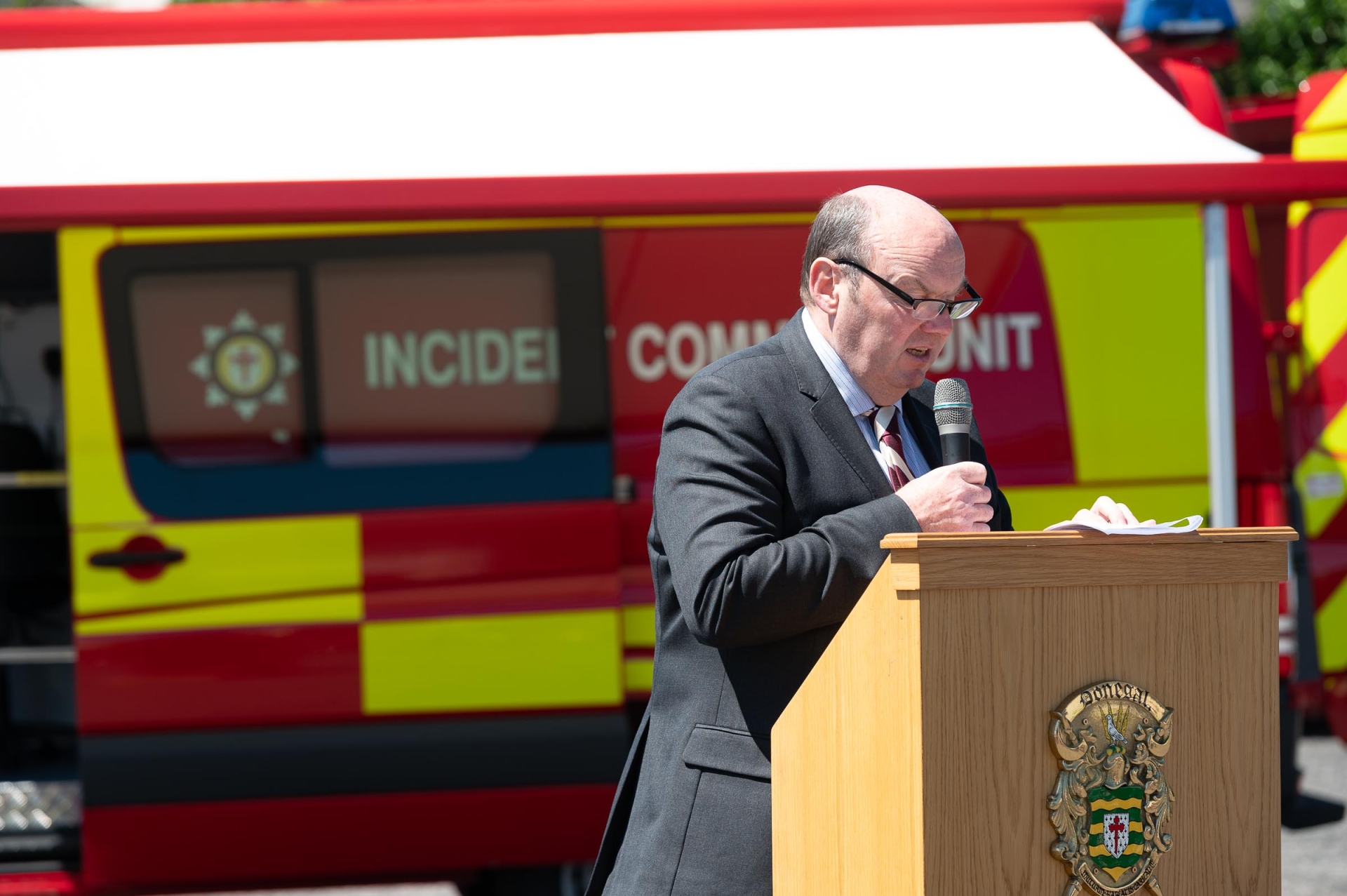 Mr. Garry Martin, Director of Economic Development, Emergency Services and Information Systems during his speech at the unveiling and blessing of the Water Tanker and Incident Command Unit in Letterkenny on Monday. Photo Clive Wasson

Garry Martin, Director of Economic Development, IS and Emergency Services in Donegal County Council announced at the unveiling a Department investment in two second hand fully refurbished Scania Class B appliances at a cost of €85k each. These appliances went into service in 2022, one located in Glencolmcille and the second appliance replaced Buncrana’s second appliance. Mr. Martin also announced a Department investment of €98k+VAT in Holmatro Rescue Equipment which went into service in fire brigades in Donegal in 2022 and an investment of €14k into mobile data terminals for frontline appliances in Donegal. 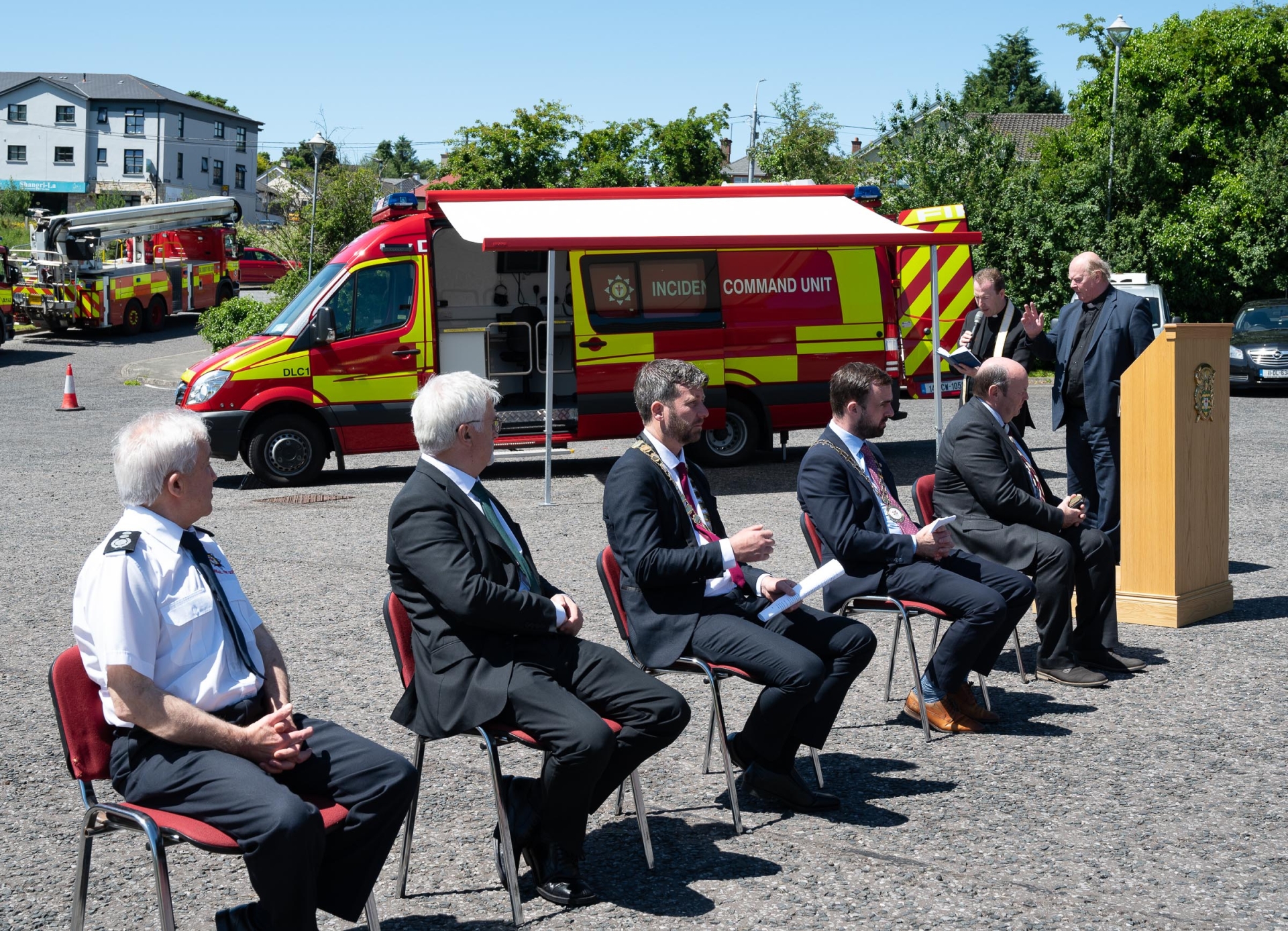 Station Officer Edward Moore was the Master of Ceremony at the event which included an address from Garry Martin, Director of Economic Development, IS and Emergency Services in Donegal County Council as well as a joint blessing from Rev Canon David Crooks, Church of Ireland and Rev Fr Kevin Gillespie, RC. 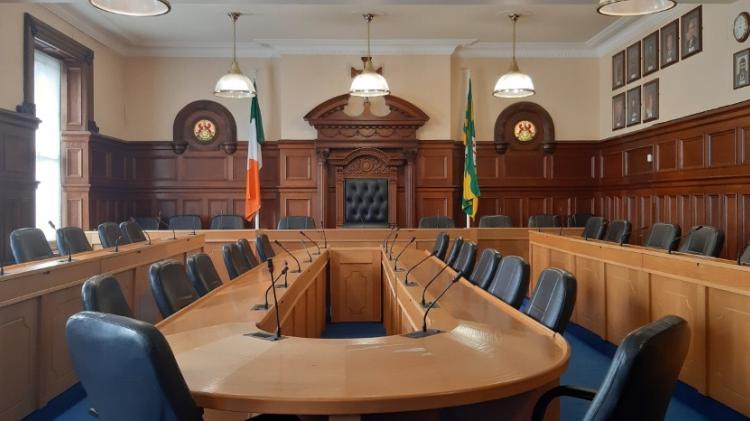